At this point, the response to gun violence operates like clockwork.

As soon as the news reports of last week’s shootings hit the airwaves, the country fell into what has become a familiar ritual. First, there’s shock, then grief, then outrage, then…helplessness. Every time a gun death enters the national discourse, we go through these motions.

Even the helplessnesses has become a ritual: first we see the strong criticisms of gun laws. Then comes the response: the first group is accused of politicizing the tragedy. And the the original group, now on the defensive, comes out with an even stronger statement, demanding that politicians take action. All of that happens even though everyone on both sides of the debate is, by now, fully aware of the fact that politicians will do nothing.

This has become a sad pattern, but the debate about guns and gun violence has followed something like this pattern since 1968. That year marked the passage of the Gun Control Act, and the beginning of the Groundhog Day-style response to gun violence.

On both sides, partisans deploy the usual arguments: anti-gun groups can make the case that we haven’t taken gun control far enough; pro-gun groups can argue that gun control is never going to work. But what neither side can argue against is that we’ve failed to make a significant dent in the number of deaths by means of a gun. By some estimates, 1.4 million people have died of bullet wounds since 1968 because of gun violence.

In the face of that kind of data, and the paralyzed nature of the debate, is it possible we’ve been looking in the wrong place for answers? Some people ache for our leaders to pass stronger laws, in the belief that we can legislate this problem away. But in a universe in which passing such laws looks increasingly unlikely, and in which the effectiveness of those laws can be called in serious question, shouldn’t there be another way to tackle this problem? 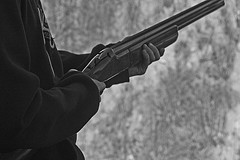 There is another answer.

In other parts of our economy and life, problems that seem to have no solution are set upon by technologists. Inevitably, in the face of “We’ll never figure this out,” someone comes along and upends the way things have always been done. Innovations often give us unexpected leverage. Someone asks, for instance, whether the movement of a horse could be compacted into an automobile.

A pair of brothers—bicycle mechanics—build a machine to approximate the movement of birds. A small icon on our phone makes us question the monopolies of the taxi industry. A site leads us to book homes, instead of hotels, for vacations. On and on.

In all of these cases, we’re left feeling that what seemed impossible was inevitable. Of course an app can call us a car! Of course a motor could substitute for the power of a horse! Of course! In the end, the old way of doing things seems hopelessly outmoded; we wonder how we ever thought that was the right way to do things.

Which brings us to the natural question about guns: Why, all these years later, are we still shooting hot lead and very high speeds? We haven’t found any better methods for self-protection other than sending a small ball tearing through human skin and bone and blood? After hundreds of years, we’ve basically come as far as faster and better muskets?

When you ask questions like this, you’re led back to first principles. In particular, why do people buy guns in the first place? The answer: to protect themselves from violent attack.

The only justification for taking the life of another person is that you must do so to defend yourself or someone close to you from imminent risk of death or serious injury. Put simply: killing has been the only option to defend against being killed.

This is the false choice we’ve been left with—that the only means of stopping violent assailant is a device that could end the life of the assailant, and is basically an upgraded version of a technology that’s been in use for a few hundred years. But what if it didn’t have to be this way? In other words, what if the effective and immediate defense of self did not require an instrument of death?

More bluntly: What if we had the means to incapacitate someone without ending their life with a bullet? 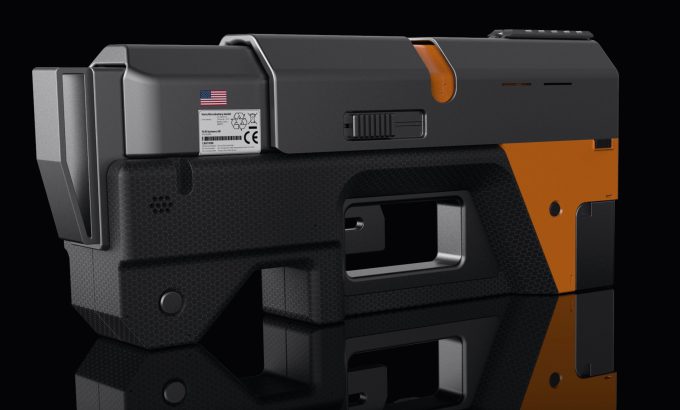 That might sound ridiculous. But then, in 1902, so did the idea of manned flight. That idea was considered so outlandish that anyone experimenting with flying machines was quickly labeled a crank or a fool. Until, of course, it happened. Breakthrough technology tends to follow this pattern: being dismissed as crazy until its accepted as a natural part of our lives. In 1962, the idea of sending humans to the moon seemed a science fiction fantasy—until it was done. In Medieval Europe, it seemed that putting the power of the canon into our pockets was an impossibility—until the gun was created.

I imagine that the next kind of self-protection will go through this process. It will be thought crazy and unwieldy and unimaginable—until it is standard issue. I also think we’re on the cusp of this new era.

We are at a turning point in history, where there is no longer a valid justification for making things more deadly. We must focus our efforts in a new direction. Justifiable self-protection has always been linked to the infliction of death upon others. What happens when we break that link? What happens when people can fulfill the basic need for self protection and preservation without the tragedy of taking a life?

This isn’t idle speculation for me. I had two high school friends killed with guns in a road rage incident. That’s when I started to think more deeply about this problem. Right around that time, I moved to Europe to study, and I saw how their society viewed our gun culture with suspicion and derision. They gave me the chance to step back and ask: why?

On returning to the US at the age of 23, I attacked the gun violence problem as a technology, rather than political problem.

I managed to find a former NASA engineer who had been working in this space since the mid 1960’s with a device called the “TASER.” For a variety of reasons, the technology had not matured to a point where it was practical. In 1993, we set out to give it another try, starting a company with some funding from friends and family.

An admission: today, this NMI technology is not a suitable replacement for the firearm. It is used primarily in situations where the threat levels are low; typically, it’s used as a way of defusing situations before they escalate.

It took about seven years for us to figure out the biggest technological hurdle — how to make the technology truly effective. Once we accomplished near-complete incapacitation, or Neuro-Muscular Incapacitation (NMI) in a product called the M26, the technology rapidly spread across the global law enforcement community.

An admission: today, this NMI technology is not a suitable replacement for the firearm. It is used primarily in situations where the threat levels are low; typically, it’s used as a way of defusing situations before they escalate.

But it’s getting closer to become a real, dyed-in-the-wool alternative to a firearm. The technology has advanced faster than any of us could have anticipated, and given the several centuries head start that conventional guns have had, I like our odds. 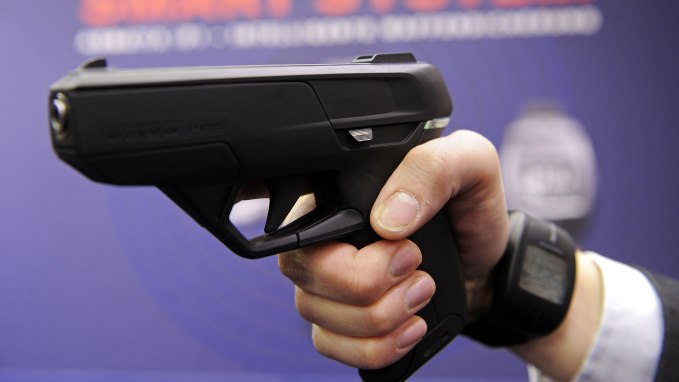 An employee of Armatix poses for photographers as he presents the “SmartGun Concept” at the International Weapons trade fair in the southern German city of Nuermberg on March 12, 2010. 1150 exhibitors are taking part in the trade fair running to March 15, 2010. (Photo: JOERG KOCH/AFP/Getty Images)

And we’re not the only ones working on the problem. An Israeli company named Zore invented a smart gun that just raised $300k on Indiegogo by using technology to prevent a gun from being used by anybody other than the owner.

The race for “smart guns” has drawn a wide array of amateur inventors and hobbyists. It doesn’t mean that the solutions are perfect—but it matters that there’s a search for some alternative. It means the problem of gun violence is a solvable problem, one in which technology might give us an advantage that politics cannot.

The real questions will come when the technology reaches its finished form. When it does—when we have achieved a non-lethal capability which rivals and outperforms lethal force—we will have some significant soul searching to do about how or why we would choose weapons that kill over weapons that don’t. For the moment though, I and others are simply working to the day when that question becomes a legitimate one. The answer, I think, will be self-evident.