Bots can be useful little pieces of technology to help you work smarter, and in Slack they can help make the communications tool a kind of centralized enterprise application dashboard. The trouble is that they also can generate lots of unwanted noise in the form of over-messaging.

To help bring that message chaos under control, Workato released a tool today called Personal Workbot designed to deliver only those messages that are relevant to your job to a direct message channel.

At its core Slack is really a way for teams to communicate and if you’re getting all of the updates for your entire team, the messaging onslaught can quickly become so overwhelming some people have been simply turning the bots off.

Workato launched a Slack bot called Workbot in January that was designed to make Slack that central control system for enterprise apps, the Holy Grail of sorts for enterprise users tired of switching between apps to get at all of their information. Instead of going to Salesforce to see the customer record, Zendesk to see the service record, Quickbooks to see the accounting record and so forth, companies could use Workato’s bot to bring all of that information into one channel.

With over 1,700 companies using Workbot, Workato got a lot of feedback, and while Workbot solved a bunch of app integration issues, and helped reduce the amount of email going back and forth when combined with a tool like Slack, it created its own set of problems. It turned out having all those applications accessible in one place can generate a lot of messages.

The idea with the new bot is to ease that issue by delivering the messages that matter to you separately from the group channels. They also decided to surface the most important work-related information in the form of summaries — such as the most critical outstanding support tickets or the best customers coming up for renewal — delivered each morning as a kind of de facto ‘to do’ list. 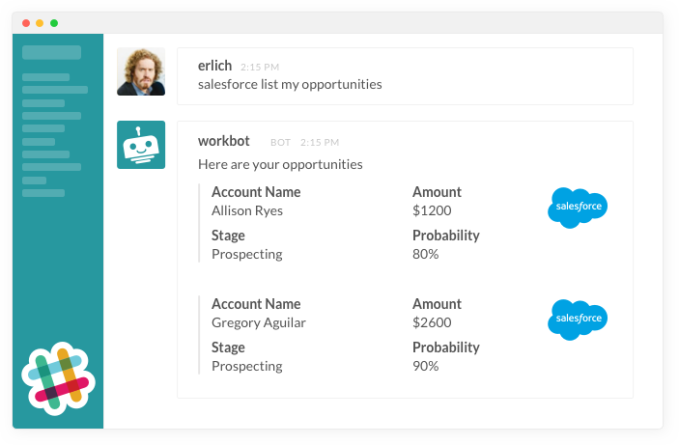 If you’re not happy with the default personalized scripts and need to adjust the information you’re receiving, the company has an underlying scripting language they call recipes that lets users (or the Slack admin or IT pro) tweak the process so it’s more to your liking.

What Workato found was that solving the app switching problem created a whole set of unintended consequences. Today’s release is designed to answer that and give users some semblance of control over the messaging they receive inside Slack.