Airbnb is fighting back against new legislation in San Francisco that aims to hold the short-term rental company accountable for ensuring its hosts register with the city.

The law, finalized on Tuesday by the Board of Supervisors, requires Airbnb to verify that its San Francisco hosts have registered with the city and will penalize the company with $1,000-per-day fines and misdemeanor charges if it fails to comply. City supervisors have argued that host registration is a crucial step in combatting San Francisco’s historic housing crisis, while opponents claim the new law conflicts with federal legislation that protects websites from being held responsible for users’ posts.

“This regulatory hammer is too heavy and it’s missing the nail,” CALinnovates executive director Mike Montgomery tells TechCrunch. CALinnovates lobbies on behalf of the tech industry and sent letters to city officials favoring Airbnb’s position in the fight.

Although advocacy groups like CALinnovates have suggested that Airbnb could sue San Francisco to overturn the law, the company is currently taking a gentler approach. Airbnb has launched a campaign that asks the city to make it easier for hosts to comply with registration requirements.

The city currently requires local hosts to acquire business licenses; register with the city in person; file quarterly reports to the city describing how many nights guests stayed in their home, as well as how many nights they themselves slept at home; and file an itemized list of every item in their home that a guest might use, including shampoo and cutlery.

The requirements are undeniably insane, and even city supervisors who backed the law have agreed that registration should be easier. 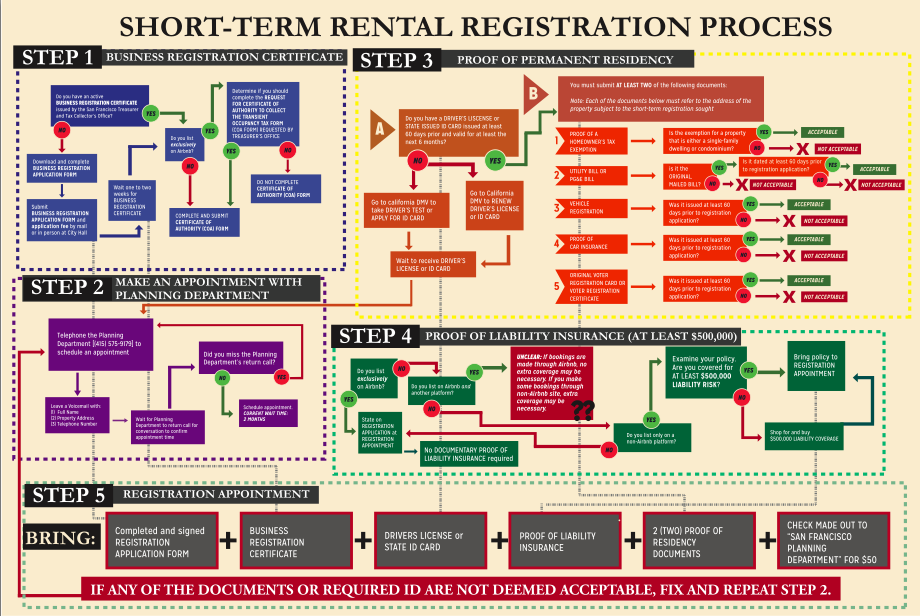 A diagram shows the process Airbnb hosts go through to register in San Francisco.

“The process right now is quite cumbersome for many hosts, especially when you talk about hosts that are only engaging short-term rentals for a few days a year, or a week or two a year,” Supervisor Scott Wiener said during a hearing on the issue earlier this month.

In its new campaign, Airbnb is asking the city to streamline the registration process in several key ways:

Unsurprisingly, compliance with the requirements is low so far: roughly 1,300 of Airbnb’s estimated 7,000 hosts have tallied up their forks and toiletries to register with the city. The low compliance rate is why San Francisco wants Airbnb to boot unregistered hosts off the platform — and that’s where technology advocates say the city is violating federal law.

CALinnovates argued that the amendment is a violation of Section 230 of the Communications Decency Act. Section 230 protects platforms from being held accountable for the content of their users’ posts. It’s what prevents YouTube from being held liable when someone uploads a copyrighted music video, or eBay when someone uses it to sell knockoff handbags. CALinnovates says that Airbnb should get the same protections from liability for the listings hosts upload to its site.

“The Board of Supervisors got it wrong,” CALinnovates Montgomery said in a statement after the passage of the amendment. “This amendment fails to pass legal muster and is a dangerous precedent for not only the home sharing industry, but the entire tech industry. Instead of making decisions grounded in sound public policy, the Board instead moved forward with legally questionable legislation.”

Whether San Francisco’s legislation will have broader impacts on the industry remains to be seen. But it does mean Airbnb is now at the familiar regulatory juncture where other sharing economy companies have struggled — the point where companies scramble to prove that they’re just a platform, one with no physical products that’s staffed by voluntary participants rather than employees.

Like Uber before it, Airbnb has dipped into a highly regulated industry of physical goods. Now that the regulatory hammer is coming down, Airbnb wants to seesaw out of the physical realm and insist that it’s just a platform and can’t be held responsible for what happens inside San Francisco hosts’ homes.

But for now, Airbnb isn’t tangling with the legal issues raised by Section 230. Instead, the company is just pushing for overhaul of the registration system on its website.

“The board acknowledged that the registration system is broken and, in order to help people to be able to stay in their homes, the city needs to fix it. We hope the Board will act to fix this broken registration system, and we are considering all options to stand up for our community and keep fighting for real reform,” an Airbnb spokesperson said in a statement.