Sling TV, Dish’s internet-based streaming TV service for cord cutters, has rolled out a number of changes to coincide with its debut on Apple TV, announced yesterday at Apple’s WWDC keynote. The company also launched a dozen Viacom channels across both its service tiers, including popular additions like Comedy Central, BET, MTV, Nick Jr., Spike and more. The Sling TV app is getting a new look-and-feel, too, with a more personalized interface that offers tools for tracking favorite channels, shows, movies and more.

The company so far has struggled to offer a simple, straightforward and intuitive interface for its service, and unfortunately the launch of the updated interface doesn’t radically improve Sling TV’s usability. But it’s not quite as bad as before. Plus, it introduces the more customizable viewing experience Sling promised earlier this year.

At that time, it said that its user interface was getting a makeover that would begin to roll out to all devices “later this quarter.” That time frame wasn’t exactly met, though.

Sling TV says now that the new look is debuting on the Apple TV as the “first phase” of the updated user interface roll-out. This includes the introduction of the “My TV” feature which lets viewers select their favorite channels, set favorite movies and shows for one-click access, and pick up viewing where they left off on select programs. (Not all programming will offer this latter option). 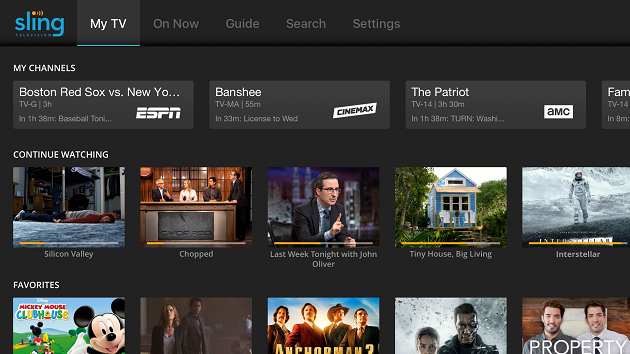 The “My TV” feature is only part of several design improvements Sling said it would be adding to its streaming service.

The Apple TV app will also see the addition of a refreshed “mini guide” for browsing live content, a way to continue watching programs where you left off, an “On Now” view that’s organized by categories, and a series view for tracking favorite shows. And Sling TV will support Siri remote dictation. 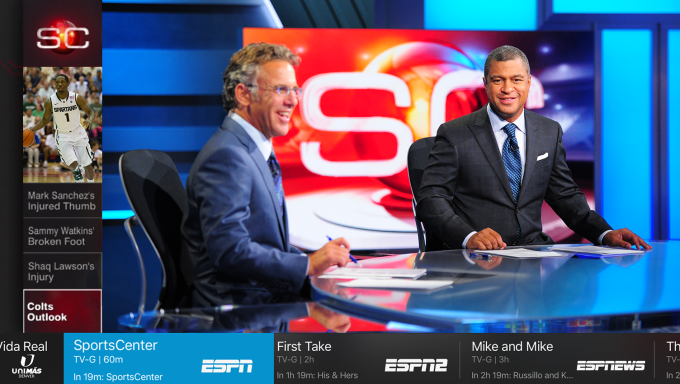 The company had earlier said that other design improvements were in the works, including a “Recommended” section that will update based on time of day and viewing habits, a new “Movies” tab, and an upgraded Sports section which makes it easier to see when your teams are playing. These haven’t yet hit supported devices.

Sling says that other devices beyond Apple TV will get a new interface in the coming months, but didn’t offer a more solid timeframe.

Not all of the new channels will be available in the core lineup (the base package). Instead, for the most part, they’ll be added to Sling’s extra packages  – the $5 per month optional add-ons.

MTV, MTV2, LOGO, TV Land, Spike and truTV (which moved from the Lifestyle Extra), for example, are now available only in the Comedy Plus add-on.

Sling TV also offers a separate service that lets you stream TV to more than one device at a time, and this has its own programming lineup due to the content providers’ restrictions and need for Sling to forge separate deals.

This lineup is now expanding with some of the Viacom content, too. There’s now a “Kids Extra” package available for this multi-stream service. And the core lineup (aka the “Best of Live TV”) for multi-streamers will include Comedy Central, Nick Jr. and BET.

The core lineup for the single-stream service is also getting Comedy Central. (More details on the channel additions are here.)

Sling TV was one of several new Apple TV apps announced yesterday at WWDC. In the TV space, others soon to arrive include Fox Sports Go and France’s Molotov, which offers over 100 live TV stations.