Surround and conquer is Facebook’s new strategy for getting people to switch from SMS to Messenger. You can now read and send old-school text messages from inside Facebook Messenger for Android.

With this near-global rollout of the SMS feature, Facebook is touting ease, as you won’t have to jump back and forth between chat interfaces if your friends are split between them. “There are other SMS clients out there. Some are quite popular, focused on customization,” says Facebook product manager Andrea Vaccari. Apps like GO SMS Pro and QKSMS let you select special color themes and more. “But what we think we can provide is convenience,” Vaccari tells me.

By absorbing people’s text threads for one-stop management, then highlighting the ability to Facebook-message someone over the option to SMS them, it could ease users into the transition to all Messenger, all the time.

Facebook first integrated SMS into Messenger for Android target="_blank" href="http://www.androidpolice.com/2013/10/29/facebook-messenger-getting-major-overhaul-sms-dead-no-longer-need-to-be-friends-to-send-messages/"> in 2012, showing texts in both the default messages app and Messenger. But it dropped the feature in 2013 after weak traction, likely in a gambit to focus on boosting Messenger usage. Then in February 2016, Messenger started testing its modern version of SMS in Messenger. 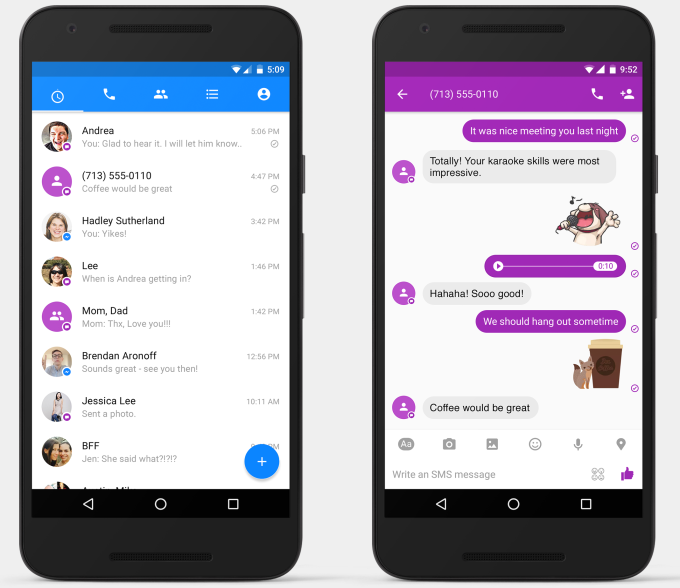 Starting today in most countries, users can open Messenger for Android, go to their settings, select “SMS” and turn on “Default SMS App.” All your SMS conversations will then appear in Messenger as purple threads, alongside your blue Facebook chats. You’ll still be able to receive and read SMS in other apps, including the standard Android system, but you’ll only be able to send from SMS. Standard SMS fees still apply.

Users on any platform can receive SMS sent through Messenger, and they won’t be able to tell it wasn’t sent from a standard texting app. But since Apple doesn’t provide as much flexibility for developers, iOS provides no option to change your SMS client, and there are no plans to bring this Facebook feature to the iPhone.

Once you connect SMS to Messenger, you’ll be able to send Facebook Stickers as well as images, videos and audio as text messages. SMS can also appear and be answered through Chat Heads, the Messenger feature that overlays chat bubbles atop other apps you’re using. However, you’ll only be able to send money, GIFs, make VoIP voice and video calls, or use third-party apps for ride-sharing and more inside actual Messenger threads. 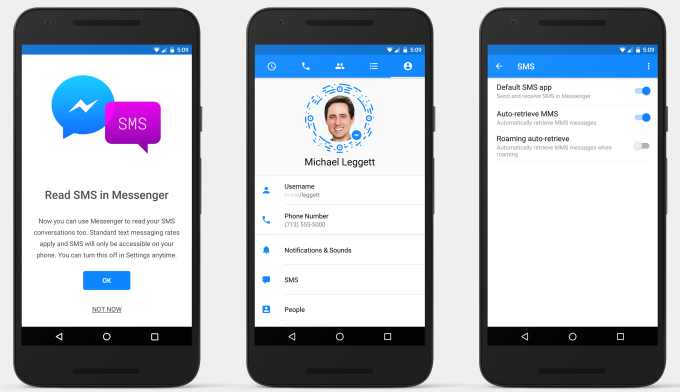 “A lot of Android texting apps didn’t keep up with the evolution of messaging, so we felt like we truly had to make Messenger the best SMS client for Android,” Facebook’s head of Messenger David Marcus explains. Eventually, Facebook could highlight the fact that chatting on Messenger is nearly free, incurring only small data rates, compared to the relatively expensive per-SMS fees some carriers charge. 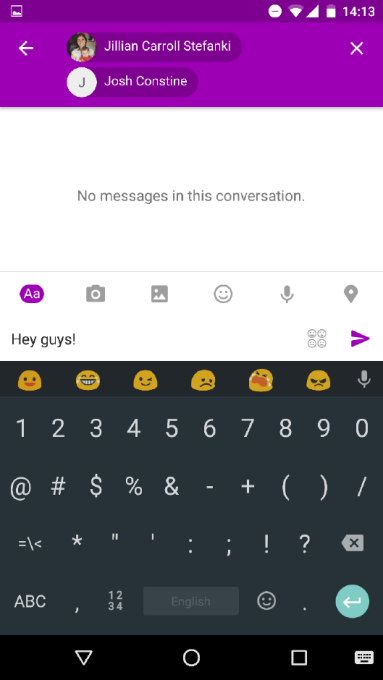 To protect privacy, Facebook does not process your SMS or store your conversations through its servers, only on the phone. “The data does not go to Facebook,” Vaccari says. Facebook also won’t merge your SMS threads into Messenger threads with the same person. That could cause chat timeline chaos if you’ve ever accidentally ended up Messengering and SMSing with someone at the same time.

Vaccari says Facebook might make thread merging an option down the line, but for now, “We’re not trying to change how your SMS behaves. You’re just using a different client or shell.”

Still, Facebook does one little trick to favor its own threads. When you type in a name to compose a new message, it will surface your Facebook friends with that name above their phone number contact from your address book. This subtly pushes people to Facebook chat with friends instead of SMS them.

Meanwhile, Facebook is much less subtly forcing people onto its Messenger native apps. It began eliminating Chat in the main Facebook app in 2014, only offering it in the Messenger companion app. Then earlier this month, it stopped letting people chat from its m.facebook.com mobile site. The company sees messaging as the future of social, and it doesn’t care if it ruffles some feathers to win.

With Messenger at 900 million users and the Facebook-owned WhatsApp at over 1 billion, Facebook dominates the chat-over-data business. Outside of China where WeChat rules, there’s no serious third-party competitor. The status quo of SMS is what people slip back to. But now, they could just slide right into Messenger.