About two years ago, Pinterest launched a different flavor of search engine called Guided Search. Instead of relying on deep data on the user, it would create a network of related topics that users can dive deep into. The idea being that a search like “iPhone” would net additional categories, like “design,” “hardware” and such.

Now Guided Search is about two years old, and the company says it serves around 2 billion searches per month. Guided Search engineer Naveen Gavini said that people also see on average around 55 ideas per search. The team — while small — still hasn’t been able to sit still after the launch, as more and more people begin using it. After all, each tool requires continued refinement if it’s going to continue to grow.

For Pinterest, that’s meant finding new ways to personalize its search tools to give users ways to figure out an endpoint for the ideas they are looking for. Localization, too, has been key — the way people search and what results they hope to find may be radically different based on where they live. The company has been focused on improving both of those in order to make Pinterest the go-to search engine for ideas, Gavini said.

“I think based on [what we’ve learned] we’ve really invested in making [discovery] more suited for that style of searching,” Gavini said. “We’ve improved guides, worked a lot on localization, and applied a lot on personalization of those guides. Initially when we launched, you could click one to three guides and be at the bottom of that. Now you can go six to seven levels deep, they’re personalized and localized based on you. That’s a lot of the behavior we’ve seen and adapted to.”

The refinement has taken a lot of work on the back end, as well. With performance tied directly to engagement in most instances, it’s important to ensure that each search returns enough content fast enough that users don’t get frustrated and leave the service. “Initially when we launched, it was a great first version — now search is twice as fast, that’s like everything from as soon as you type a letter the autocomplete showing results really quickly to actually completing a search and finding pins,” Gavini said.

Pinterest, too, is a naturally visual experience. That’s made the company have to rethink how people search for products and ideas on Pinterest. One way the company tackled that was through the launch of visual search, which allows users the ability to highlight and search for specific parts of an image. Gavini said that was to tap into a different kind of behavior the company was seeing when users were looking to refine their searches further. Pinterest now sees around 130 million visual searches a month, Gavini said. 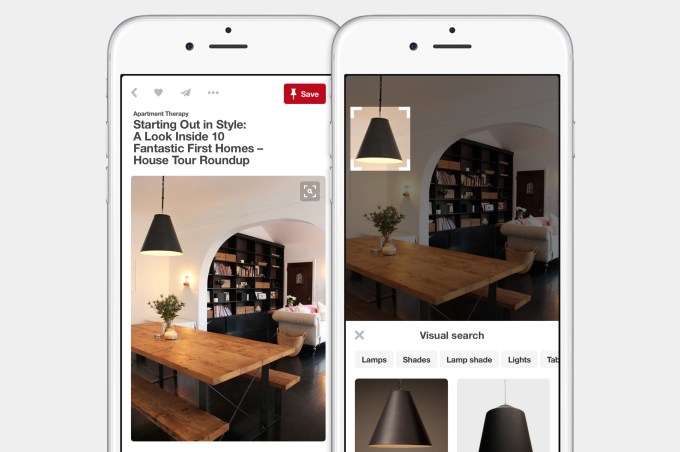 All this may seem like a lot of searches, but in reality, it still seems a little shy of what other services have. Facebook, for example, reportedly serves around 1.5 billion queries a day (most of which are for names). The company has 1.65 billion monthly active users — so a little less than a query, per monthly active user, per day (though that stat was reported in February and it could have risen since). Pinterest in September reported that it had 100 million monthly active users. So if it were to serve just under one search, per user, per day, that means Pinterest still has some distance to make up. (Pinterest’s user base has probably risen since then: leaked documents showed that the company was estimating it would have 151 million users by the end of 2015.)

Guided Search — or search in general — is critical for a service like Pinterest. It can capture the attention of people who are in a more active discovery mode, looking for a specific range of results. That’s one step closer to taking an action than simple passive browsing, which is where advertisers can convert users into potential customers. The closer the advertiser can nudge a user to that conversion, the more likely they can close a sale, and that in turn helps drive Pinterest’s business. That requires figuring out how users are using the service.

To be fair amid all this, behavior on Pinterest is likely different than behavior on other search engines. People on Pinterest are generally looking for ideas on what to do next and things to discover, which may require a lighter touch when it comes to searching. “Once they get to results, what we’ve found is people’s patterns kind of differ, they shift more into, ‘I found something and I want to get into refinement mode,'” Gavini said. “That’s where we’ve launched a few different things. I think, there’s some really basic things. That’s what we’ve really worked on in the past few years.”

There’s an opportunity to learn from the way Pinterest’s search engine has evolved over time. While the service is what Gavini describes as “human powered” — pulling together results from the way other people search through ideas — a bit of personalization can go a long way in improving the experience. That, in the end, improves engagement, and gets users coming back to the service as a go-to place for figuring out the answers to their ideas (which is good for Pinterest’s business). In short, Pinterest search seems to be growing at a decent clip, but there’s a lot of work to be done.