Facebook is continuing its heavy-handed push to get users to install its private photo-sharing app Moments. The company’s latest move – warning people some of their photos will be deleted if the app isn’t installed – has managed to make Moments the number one app in the App Store. Users are being given a deadline of July 7th to move to Moments or download their Synced albums, Facebook warns. After that date, Facebook will delete the album containing their Synced Photos, it says.

Facebook is using notifications to spread this message, and further details can also be viewed from the Synced album’s page on Facebook (if Moments is not yet installed).

The company has also taken the step of actually emailing users and telling them to install the app, which is unusual, but necessary now that it has plans to delete their data. 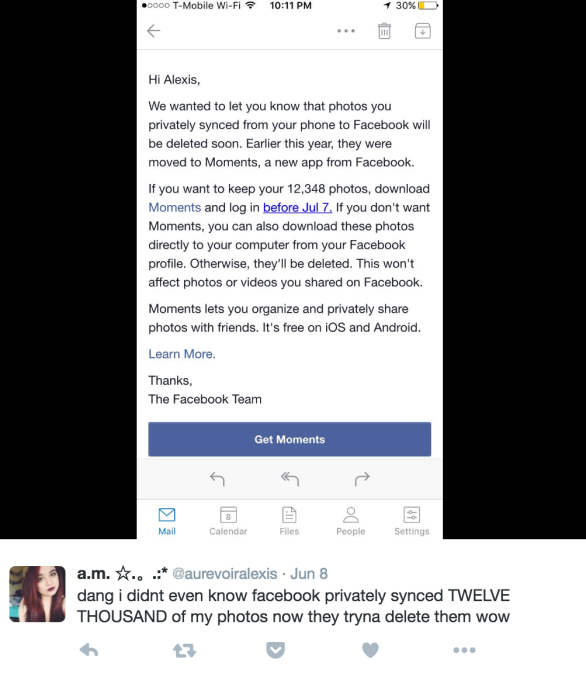 Many Facebook users probably forgot they even had a Synced album, however.

Photo-syncing was an optional feature Facebook launched on iOS in 2012 which allowed users to automatically copy all their photos from their smartphone to a private album on Facebook. The idea was that by having photos already uploaded to the social network, it would be easier to later find and share them with friends.

These photos are stored in an album called Synced (in the app) or Synced from Phone (on the desktop).

This is the album that’s going away on July 7th – not all your Facebook photos uploaded from your phone, and certainly not all your photos.

Of course, some Facebook users may not understand this, having long ago forgotten about the photo sync feature. It’s possible that a portion may think that Facebook is actually threatening to delete their photo archives if they don’t install Moments.

Others are simply angry that they’re being forced to install yet another Facebook app after being pushed to install Messenger.

facebook told me we will delete ur photos if u don't download moments by 7 july
I replied
Go Ahead.

I'm gonna delete @facebook from my phone before I install Messenger AND Moments! Facebook is the new MySpace. https://t.co/ewszcNBEGY

Forced adoption is a tactic that clearly works for the company, though. Facebook pushed all users to download Messenger by removing chat from its main app back in spring of 2014. This soon made Messenger one of the top apps in the App Store. The move came at a critical time, too – the messaging app explosion was upon us, with Facebook battling standalone apps like WeChat, LINE, KakaoTalk, and Kik. And it had just bought its way into the market via the $19 billion WhatsApp acquisition.

But some people continued to resist installing Messenger. They had been using messaging in Facebook’s mobile web app instead. Now Facebook is closing that loophole, as well – this month, it began telling mobile web users that “your conversations are moving to Messenger.” For now, you can dismiss this notice, but the feature will be entirely disabled this summer.

This has been working. Messenger, which had historically been ranked as the #1, #2 or #3 application throughout the year, had seen the occasional bad day where it has dropped in ranking a bit…even down to #9 or #10 at times. Today, however, it’s back to #3. 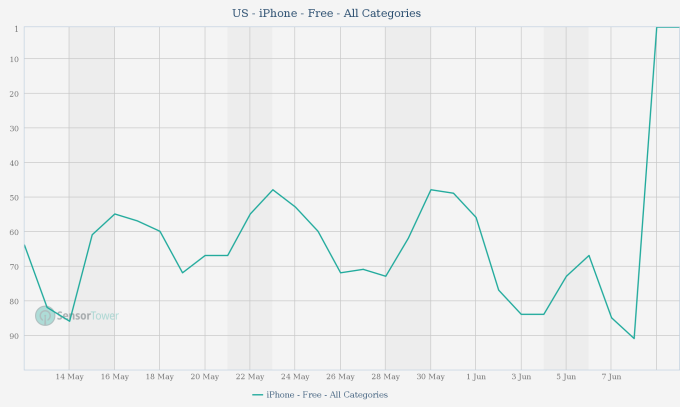 Now it’s Moments’ turn. Facebook has long since known it has its next potential hit on its hand with Moments – it began promoting it in the News Feed last fall, and it used Messenger to send automatic notifications when you’ve received photos from a friend. Notifications appeared in Facebook’s main app, too. At the end of the year, Facebook then alerted users that it was killing its photo syncing feature in January, and suggested they move to Moments instead.

That suggestion is turning into a harsher deadline: move to Moments or your photos will be deleted. As expected, this big shove has worked, as well – Moments has shot up from being ranked in the 90’s to the number one app on the iTunes App Store where it has remained for the past couple of days.