If every company is a software company, perhaps every line of business (LoB) employee should be a programmer. That would be appear to be the idea behind Salesforce’s massive TrailheaDX announcement today.

Ultimately, Salesforce hopes these LoB employees will be able to build apps without the help of IT or trained programmers. While the technical folks with programming knowledge will create components for the less technical masses, it won’t preclude just about anyone from creating a program by pulling these components together (or so they say).

And just to show how serious it is, Salesforce put together a heck of a package for the announcement. It’s one worthy of IBM, except cooler because they got Apple co-founder Steve Wozniak to keynote and a musical performance by Lenny Kravitz. It’s all part of a two-day extravaganza starting today in San Francisco.

The package starts with tools for the developer class using CSS, HTML and JavaScript to build components in the Salesforce Lightning applications development environment. . New tools designed to help accelerate app and component development include Lightning LockerService to ensure the app is secure, Lightning Inspector for debugging and Lightning CLI for code validation. All of these components were announced earlier this year, and will be included in the next Lightning release some time this summer.

The magic happens when mere mortals without a programming background can build an app (or at least manipulate some code in some way) using the Lightning App Builder.

But that doesn’t mean Salesforce is going to leave you to your own untrained devices. Trailhead is an online training system that has been in place for a couple of years now and it’s being souped up for this release (hence the DX). You used to be able to earn badges as you complete training, and you still can, but in the deluxe version you get more comprehensive training and you can earn super badges. What this means is that you have completed some serious training and have developed level of expertise as a result. 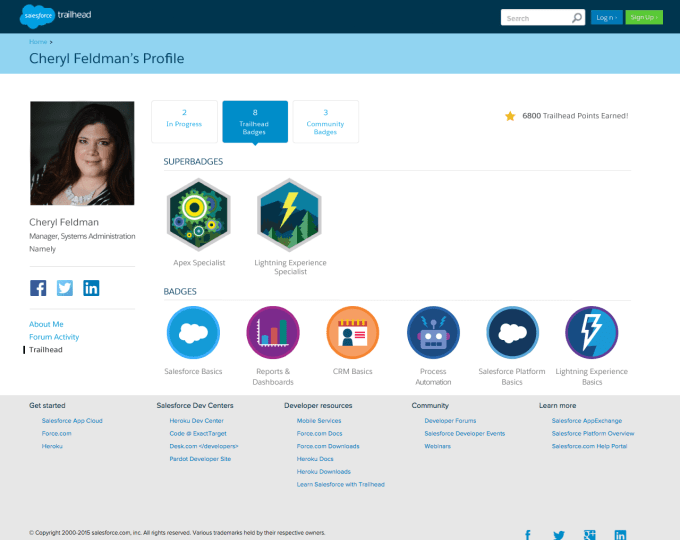 All the silliness of the naming conventions aside, training is an important component of a system like this, and gamification via badges is part of that, says Al Hilwa, an analyst at IDC. “Training is an important aspect of any successful platform outreach effort. Platform owners ignore that at their peril,” he warned.

Anyone who has been around awhile, knows that these types of drag and drop programming environments pre-date the cloud by a fair bit, but Salesforce is certainly beefing up their offering. “The notion that non-professional developers are always looking to help the business move faster is a long-running driver behind much of the innovation in abstracted or model-driven development tools. Salesforce is definitely improving its capabilities for the citizen developer [on the Salesforce platform],” he said.

But Salesforce didn’t stop there. To show they are truly serious they are putting up a $50 million fund to prime the pump and encourage third party developers to create Lightning apps and components. They plan to fund some of the best ones via their Salesforce Ventures funding arm.

And to finish off the package, Salesforce is going to open a business incubator inside its offices in San Francisco where a dozen or so early-stage businesses can work with Salesforce to help build their burgeoning businesses built on top of the Lightning platform.

It’s a huge effort on the part of Salesforce, and given the company’s reach and the success of its platform to-date it’s likely the program should help increase usage of the Lightning platform. One thing is clear though. Regardless of how it does, Salesforce knows how to pull out all the stops when it announces a new product.

All of this will be part of the Summer 2016 Lightning release cycle due out later this summer.