Partially confirming earlier reports, Twitter announced this morning plans that will begin to distance it from its strict adherence to the rule that tweets can only contain 140 characters. The company says that, among other changes designed to welcome new users to its service, it will no longer count media attachments and @names in select replies toward your 140 allowed characters. However, links will still count — a decision we understand has its roots in making Twitter’s character counter more intuitive.

That is, characters you see in the composer interface should count, even if they are in links. But you won’t see characters for things like pictures, videos, GIFs, polls and Quote Tweets, which is why they will not count. 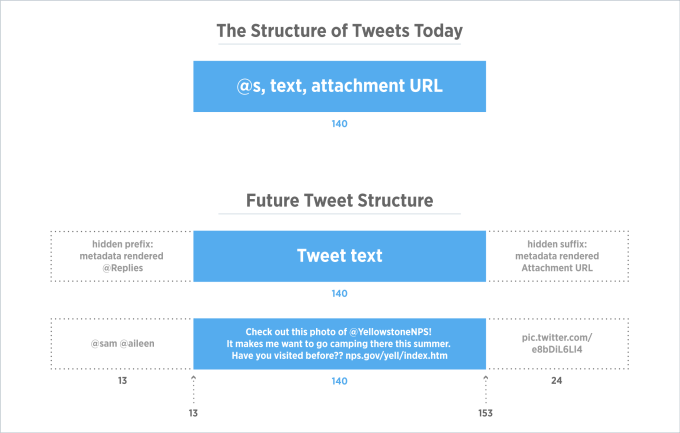 Meanwhile, the change with @replies is designed to make it easier for users to have group conversations on the service.

When many users begin to chime in on a conversation thread, being able to reply to everyone has required that you limit your words. At some point, you simply have to drop people’s names (their @username) from your tweet in order to fully express your thoughts. The update will change that, as the tweet no longer includes the leading @mentions — they are displayed differently in the user interface.

Twitter has often struggled with being too confusing to new users, not only because of its restrictions on how much you can type, but also because of its less than transparent rules around who can see your tweets. That has required savvier Twitter users to develop workarounds to make sure their tweets are seen by the widest audience.

Another change in the works will eliminate the need for one of these “hacks” — placing a period before a reply that begins with the @ sign. (e.g. .@). This was necessary because Twitter has a rule that hides from reaching all your followers tweets that start with a username.

Originally, this rule was implemented to help keep Twitter’s timeline clear from person-to-person conversations that could clutter up the experience with idle chitchat. But it was never an ideal rule to have in place. After all, Twitter is a great big, public conversational platform — the fact that you could follow chats between other users you cared about was part of its draw.

To make sure your entire audience could see your replies, many Twitter users began placing a period in front of their response. This soon became a new — if unofficial — convention. But it also helped to create a sort of “secret language” on Twitter, which newer users often felt was alienating.

Twitter is now trying to move away from a past where new and weird rules had to be explained, so new users can more intuitively understand how to use the service. This is more critical than ever, given Twitter’s stalled user growth.

“One of the biggest priorities for this year is to refine our product and make it simpler,” said Jack Dorsey, Twitter CEO and co-founder, in a statement. “We’re focused on making Twitter a whole lot easier and faster. This is what Twitter is great at — what’s happening now, live conversation and the simplicity that we started the service with.”

The ever shifting point at how funny an @reply must be before you put the dot before it.

@pgball yeah, I hate it when people don't know to use a dot before @reply

The company also noted that other changes to improve its user-friendliness have been working out — fewer than 2 percent opted out of Twitter now showing tweets that were missed while away, and a new, topic-focused onboarding flow increased follows by 48 percent, and mutual follows by 56 percent on average, on Twitter’s mobile apps.

Twitter says that, following the changes, new tweets that begin with usernames will reach all your followers. The company also says you can retweet a reply to signal you want it to be viewed more broadly.

One final change involves being able to retweet and quote your own tweets — something that wasn’t possible before, and a bit of an annoyance to those who use Twitter as a platform for sharing their own content or links.

Because not everyone sees your initial tweet, many users wanted a way to later rebroadcast their same tweet again — but Twitter prevented this. Of course, to some extent this helped cut down on spammers who could overrun the timeline with the same reposted content. But it also limited users who wanted to make sure their good tweets were seen — or, in the case of quoting tweets, wanted to comment on their original post without having to compose a new tweet.

To make this possible, Twitter will enable the Retweet button on your own tweets, so you can easily retweet or quote tweets.

Twitter is making the announcement about the changes today to give developers time to prepare.

As this change will impact the hundreds of thousands of products built on top of Twitter’s platform, Twitter is offering a grace period while developers transition their products. The changes will impact the public REST and Streaming APIs, Ads API, Gnip data products and Display products, like Twitter’s Fabric Kit for embedded tweets and timelines displayed on web and mobile, the company noted in a blog post aimed at developers.

Twitter did not give an exact timeframe for when the changes would go live, beyond “the coming months.”

If you want to read more about how Twitter’s new rules will change our behavior, read Josh Constine’s “24 more characters, for better and worse.”