AR/VR is the new hotness. VCs invested $1.7 billion in the 12 months leading to March 2016, $1.2 billion of that in the first quarter of this year alone. There are four AR/VR unicorns already (Magic Leap, Oculus, Blippar, MindMaze). Big numbers, very exciting. But as DFJ Partner Bubba Murarka says, “not all VCs have taken the red pill yet.” 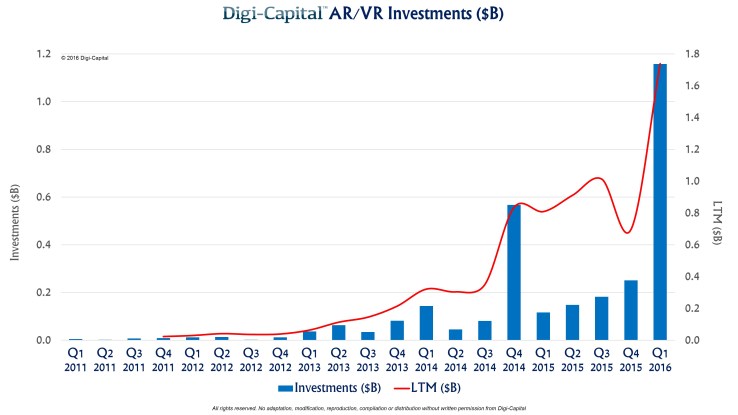 If you want something new, you must stop doing something old

Accel principal Kobie Fuller sees AR/VR as “the next phase of computing, where it’s not a question of if, but when.” DCM General Partner Jason Krikorian believes AR/VR can enable “new experiences not possible before.” Mayfield Managing Director Tim Chang describes AR/VR as spawning “the next evolution of human story telling at a whole new level — this is what it’s like to be me.”

Qualcomm Ventures’ Managing Director Jason Ball considers that “AR/VR is the new UX/UI for everything, but it will take time.” AITV General Partner Bill Malloy says that “despite it not being fully understood yet, AR/VR could surpass TV and PC in the long term.” Colopl Next CEO Shintaro Yamakami thinks AR/VR could become “the bedrock of almost every industry,” while Danhua Capital Managing Director Dovey Wan sees AR/VR as “increasing information density and decreasing distance.”

So does this mean everyone’s on board?

Qualcomm’s Ball thinks this will change in the next two-three years, “The ‘Maybe’ crowd will become the ‘I Told You So’ gang, the ‘No’ folks will turn into the ‘Oops, I missed it again’ bunch.” Having backed two AR unicorns, Qualcomm has a distinctive point of view.

If you build it, they will come (eventually)

VR will be big, AR will be bigger (and take longer). But as in all early-stage market growth, it’s curved, not straight. So while there is huge long-term potential for AR/VR, there could be just a few billion dollars of revenue this year, a progressive ramp in 2017 and a hoped-for inflection point in 2018 (when AR roadmaps have long enough battery life with cellular capability for telcos to cross-subsidize mobile AR as smartphone replacements).

Comcast Ventures’ Managing Director Michael Yang doesn’t see uncertainty about market timing as a barrier. “The big guys like Google, Facebook, Microsoft, Samsung and Sony entering gives confidence about the market, and that talent will flow in. That makes people and deal flow possible.” But The VR Fund General Partner Marco DeMiroz thinks that “startups in this space need to raise 18 to 24 months of financial runway until the mass market arrives.”

Just because you can make something visually stunning in AR/VR doesn’t mean you’re going to raise money.

Where RRE Managing Partner Jim Robinson wisely chose to not invest in 1990s VR, this time he’s in the market. “The technology is mature enough that it generates a genuine physiological response, and the middle layer of getting humans into VR is why we invested in 8i. They’re creative and technical, not overhyped, and smart about managing their cash during these early years.”

Inevitable Ventures’ partner and musician D.A. Wallach jumped into the market six years ago with DAQRI, and VR more recently with 8i. “Users will decide what content does and doesn’t work in the next few years, so fundamental technologies enabling compelling emotional experiences are really interesting at this stage of the market.”

For those in the industry, AR/VR is all-encompassing. But VCs see things differently. TransLink Capital Managing Director Jay Eum sees AR/VR as a vertical slice across larger horizontal sectors. “Dive in to a specific sector and find a problem that can be solved efficiently or an experience that can be enhanced through AR/VR, then you’ve got something valuable. That’s why we invested in Penrose Studios.”

Comcast’s Yang thinks similarly. “Next VR was compelling for us because they know how to operate in their industry beyond their VR chops. You need the knowledge, relationships and go-to-market to make it work.” Combined with market timing questions, Accel’s Fuller is looking for “practical business models now, that will also scale in the long term.”

FirstMark Capital Managing Director Matt Turck invested in Sketchfab because it is “strategically positioned at the intersection of 3D production tools (Photoshop, Sketchup, TiltBrush, RealSense, Tango) and 3D consumption platforms (VR, AR, web, mobile, 3D printing). So regardless of which technology wins, they will be part of the ecosystem.”

Suffolk Equity General Partner Freddie Martignetti comes back to, “investing in outstanding teams, who’ll succeed regardless of market timing.” In other words, AR/VR startups need to be great at something industry-specific where they can make money for the next two years, as well as having the ambition for dominance as the market scales. Just being good at AR/VR without something broader to sustain you isn’t enough for VCs.

Not all VCs are the same, and they don’t all think alike. You need to do your homework on them as individuals if you want a shot at investment.

Accel’s Fuller sees opportunities in “improving existing user behavior, immersive experience sharing as the next evolution of media, and mass AR/VR user-generated content. These will allow AR/VR platforms to stand on their own with habitual usage and longevity.”

Balderton Capital partner James Wise is interested in “backend infrastructure to capture, process and create AR/VR, AR/VR apps broadly, and the middle layer that makes it all possible. AR/VR needs to become radically simpler, so everyone can use and create.”

DCM’s Krikorian believes the market needs to enable users “to do stuff, not just watch stuff. It’s not only about lean-back entertainment, and we need to see real people having real interactions to build real relationships. For that to happen, the friction needs to be taken out of the system the same way we’ve seen in mobile.”

CAA Head of Business Development and CAA Ventures’ head Michael Yanover is interested in investing in “content platforms, not content pure plays, where CAA can add value and connectivity for consumer driven businesses.” 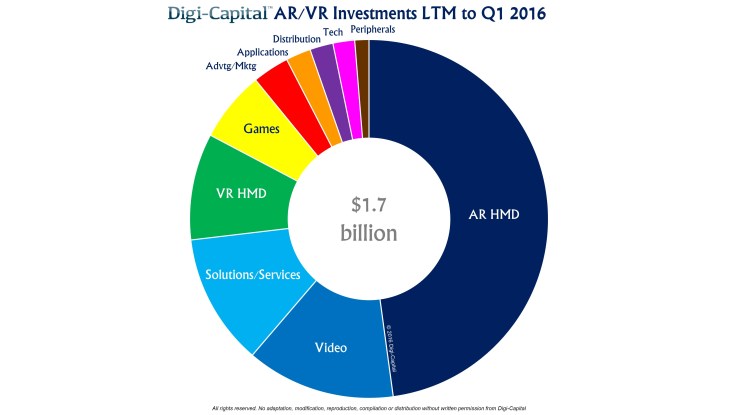 So where has the money been going? The leading AR/VR investment sectors in the 12 months leading to Q1 2016 were AR/VR hardware, video, solutions/services, games, advertising/marketing, consumer apps, distribution, tech and peripherals. While Magic Leap took almost half of the total, the remaining sectors still raised 45 percent more in Q1 2016 than Q4 2015.

Early-stage investment follows a predictable series: Seed, Series A, B, C, etc. Some funds are series-agnostic, others are more specific (e.g. First Round Capital). But early-stage markets are unusual, particularly from Series B onwards. AR/VR is no different.

For the seed stage, the market is narrow but deep, with dedicated and focused AR/VR funds, incubators and angels who often work together. These include HTC Vive X, Colopl Next, The VR Fund, Super Ventures, Signia Ventures, Maven Ventures, Rothenberg Ventures, Presence Capital, GREE VR Capital, Boost VC, Greg Castle and others, plus the Sand Hill Road VCs who are happy to start at the seed stage and follow on.

For Series A, the market becomes broader and shallower. Some of the AR/VR seed investors have the financial capacity to follow on, but others don’t. Here, Digi-Capital tracks more than 200 global VCs and corporates who have invested in AR/VR, and there are many other VCs who are actively exploring Series A investment.

AR/VR is cool, but that cool factor is beginning to wear a bit thin with VCs.

For Series B onwards, the market changes dramatically. Series B usually requires traction in the form of revenue, so it becomes much harder for VC firms to invest in AR/VR because of the early stage of the market. This is where the VCs on Sand Hill Road are guiding portfolio companies by leveraging relationships with strategic corporate investors and international investors from China, Japan, South Korea and elsewhere. 20thCentury Fox Home Entertainment President Mike Dunn makes a pretty clear case for why they invested in ODG. “We know it’s going to be a big part of our industry’s future, and opportunities to invest in entrepreneurs of that quality don’t come along every day.”

Another aspect for AR/VR entrepreneurs to consider is fund vintage. AITV’s Malloy puts it succinctly. “If your fund is in ‘harvest mode’ late in the lifecycle, AR/VR is hard to invest in because of time horizon. If you have a relatively new fund, then you have the flexibility to see what happens with market timing without getting squeezed.”

AR/VR is cool, but that cool factor is beginning to wear a bit thin with VCs. Borealis Ventures’ Managing Director Jesse Devitt calls it like he sees it. “Stop showing me dragons. Sure, you can make a beautiful dragon in VR. And yes, it’s cool the first time you see it. By the twentieth dragon it gets pretty old. Show me something useful in AR/VR. That’s a lot cooler.”

In other words, just because you can make something visually stunning in AR/VR doesn’t mean you’re going to raise money. If there isn’t something compelling from a user’s perspective (whether consumer or enterprise), and what you’re doing isn’t easier or better in AR/VR than on a smartphone, tablet or PC, why are you showing it to a VC?