Product Hunt, the popular aggregation site for apps, gadgets, and other products, has figured out a path to revenue for the relatively new platform – let product makers sell their wares right on the site and take a cut.

It’s a common revenue generation model, but one that seems to have taken some time for other tech platforms reliant on the community to develop. The 10-year-old Twitter and 5-year-old Snapchat are still experimenting with monetization strategies and Pinterest, going on seven years, only adopted a similar sales model to Product Hunt’s with Buyable Pins last summer.

Founder Ryan Hoover told TechCrunch he’d been thinking of implementing a direct buy option for well over a year now, but he wanted to wait for the right time to launch.

The platform has gained massive brand recognition throughout Silicon Valley and has worked to stretch its wings beyond San Francisco and the tech scene by adding categories such as books, games, podcasts and live chats in the last year.

Combined with an upward trajectory of user growth, Hoover believes his startup is ripe to start experimenting with revenue generation. 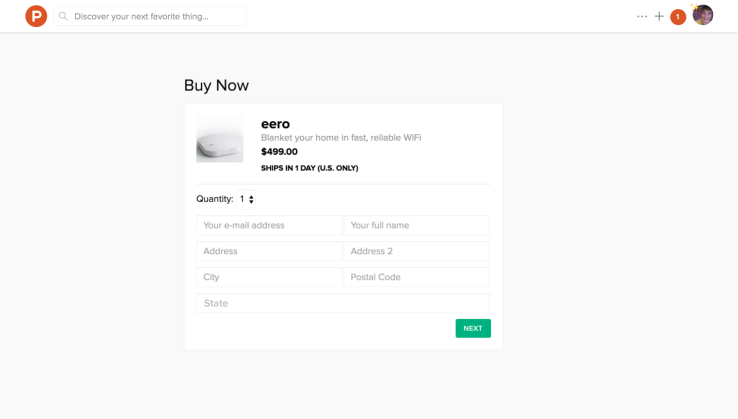 The percentage Product Hunt is getting from each sale will vary, depending on the price of the product, volume sold, and the deal that each product creator is able to negotiate.

Though Hoover says the new buying feature is more of an experiment and that he’s still very focused on building the community and getting feedback on the process.

“A move toward revenue generation is still not our primary focus,” he told TechCrunch. “But what I will say is maybe seventy-five percent of makers on Product Hunt are right there involved in the conversation and answering questions so we have an interesting opportunity in that direct connection with those makers already, which makes it easier for us to move in this direction.”

Not every product seller can set up shop right away, but a handful of startups have worked out a deal to start selling on the platform today, including Eero, Electric Objects, Oristand, Blockhead and “Octobrellas” from Blunt.

The aggregation site is also partnering with GE to help introduce the new selling program and sell some of GE’s products to the community.

The rollout is similar to the way Pinterest launched its Buyable Pins, by partnering with certain merchants and testing out consumer behaviors around the process. Pinterest told TechCrunch it now offers 2.5 million buyable products through the platform.

Knowing what I know about the loyalty of Product Hunt’s community and from various anecdotes some product creators or “makers” on Product Hunt have shared with me, I’d say the move will be very beneficial to Hoover’s bottom line if he can negotiate the right deal.

The Secret of Hoover’s Success

Product Hunt’s user base tends to be very enthusiastic about new products – showing their appreciation for the most loved items with an upvote. And some have reported a flood of sales from the site.

JC Fulknier, founder of ResetPlugs, told TechCrunch he received over 500 orders within a week after appearing on Product Hunt, and that it was better than exposure from press and CES combined.

The founder of Maitre, an app letting folks create a waiting list, wrote on Medium how the platform helped him generate $1,000 in a single day. He used some clever marketing tactics to get there, but the product isn’t novel and people still bought it.

There are countless other examples of product makers gaining success (whether from generating new users or sales) from a mention on the site. It’s been good to those able to get listed and it makes sense Product Hunt would want to get a cut of some of the profits.

My guess is the buying feature will be popular for those visiting the site as well as it cuts out an extra step requiring them to click off the site to get the products they already want, but people don’t always react well to change so we’ll have to wait and see how it goes.