With 17 percent of the GDP, it’s fair to say that Samsung is South Korea, or at least has represented it on the global business stage for the last decade or so.

But for the last year or so, with the contraction of the global economy and the dynamism of Chinese (Xiaomi) and Indian (Micromax) competitors in the smartphone industry, the giant chaebols of South Korea — Samsung first, then Hyundai and a few others — have experienced difficulty.

Not only did their profits stop increasing, but for some like LG, they have been “bleeding money, and subsequently talent,” according to our contacts. 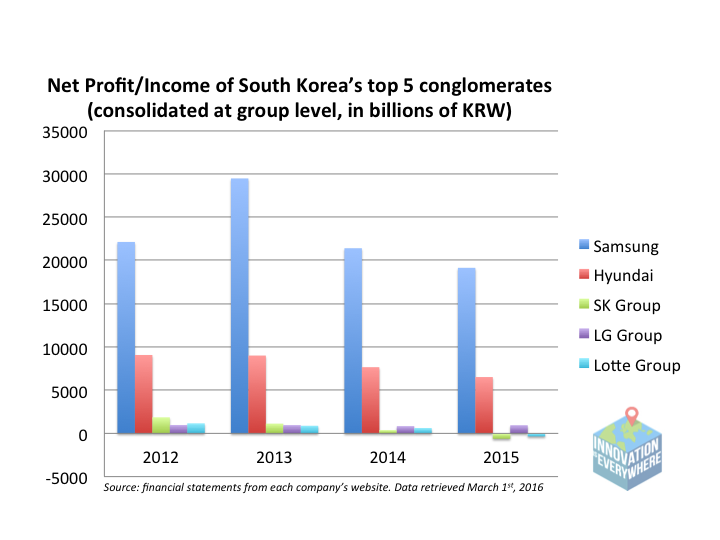 The fall of the chaebols – how South Korean giant conglomerates stall

In a country where those huge conglomerates used to attract the graduate students from the top three universities (collectively known as SKY1 for Seoul National University, Korea University and Yonsei University) and be the primary scale of social life and recognition, this is quite a shock.

If South Korea went from having the same GDP as Ghana in 1957 to being on par with Israel or New Zealand today, it’s partly because of the investments driven by the government, and, in a new era of trouble, it again put a huge stack of money on the table to transform the country.

After a week of exploration of the business and startup scenes in Seoul, a few recurring comments allow us to understand a big change has been in the making for the last two years. 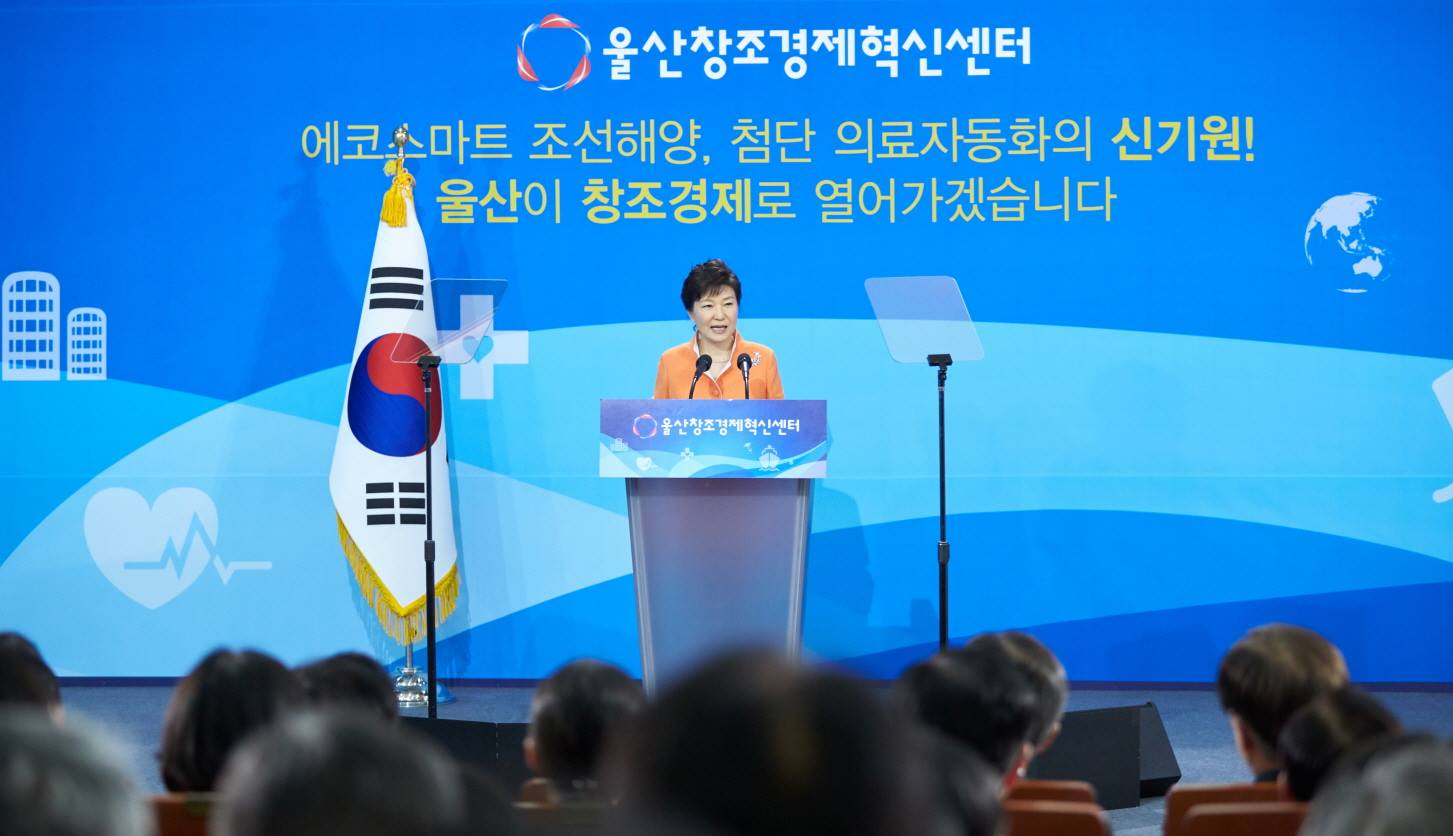 Not everyone seems to like the current president, Park Geun-hye, but, without exception, everyone has “give credit” to the way she has been driving quite a revolution via her “creative economy” plan.

The program, announced in her inaugural address of 2013, has since been developed into a set of strategies, and, depending on sources and articles, range from a few to a few dozen billions.

Among the most prominent investments:

It is already possible to find startups hosted by the CCEI on StartupKorea.com, as well as other details on each center, such as their specialty field.

If other governments in the region and elsewhere have rather unsuccessfully poured money into creating a startup scene from scratch, the South Korean government has at least two strong references in the field of infrastructure creation leading to growth. 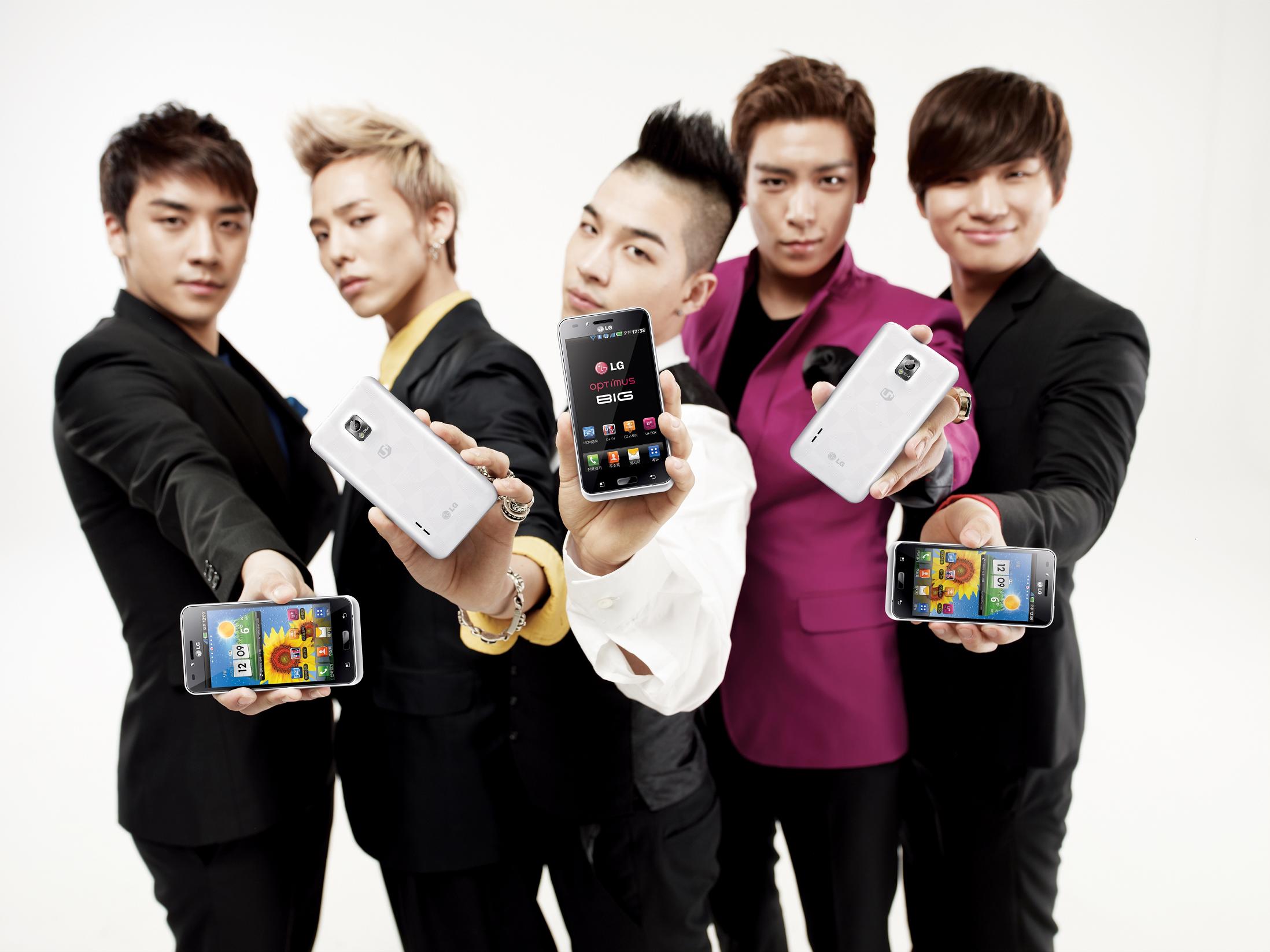 K-Pop, proudly brought to you by South Korean government

The first one is the deployment of the fastest high-speed Internet, making South Korea the first country to have more than 100 percent penetration. The second was with K-Pop, into which the government invested some $6 billion in venues, subsidizing concerts and shows. It’s admittedly an amazing export product in Asia, setting the trends in fashion, music and TV shows while still being in South Korean only, and not designed for export initially. Eventually, the 4G completed an already dense market to make it a perfect place to test apps of the future, in optimal infrastructure conditions.

This costly bet on entrepreneurship and creativity is still amazing in a country where the professional and social life have long been exclusively dominated by the large conglomerates known as chaebol. Now, thanks to this support, most of them have opened labs and accelerators — it’s a big change for their usually secretive culture.

As a broader result, some 60 accelerators are now active in the country, with a variety of models, from FuturePlay’s tech-driven and KAIST (the Korean MIT) engineered tech startups, to D-Camp’s accelerator funded by a consortium of banks, to Google’s first Campus  in Asia. 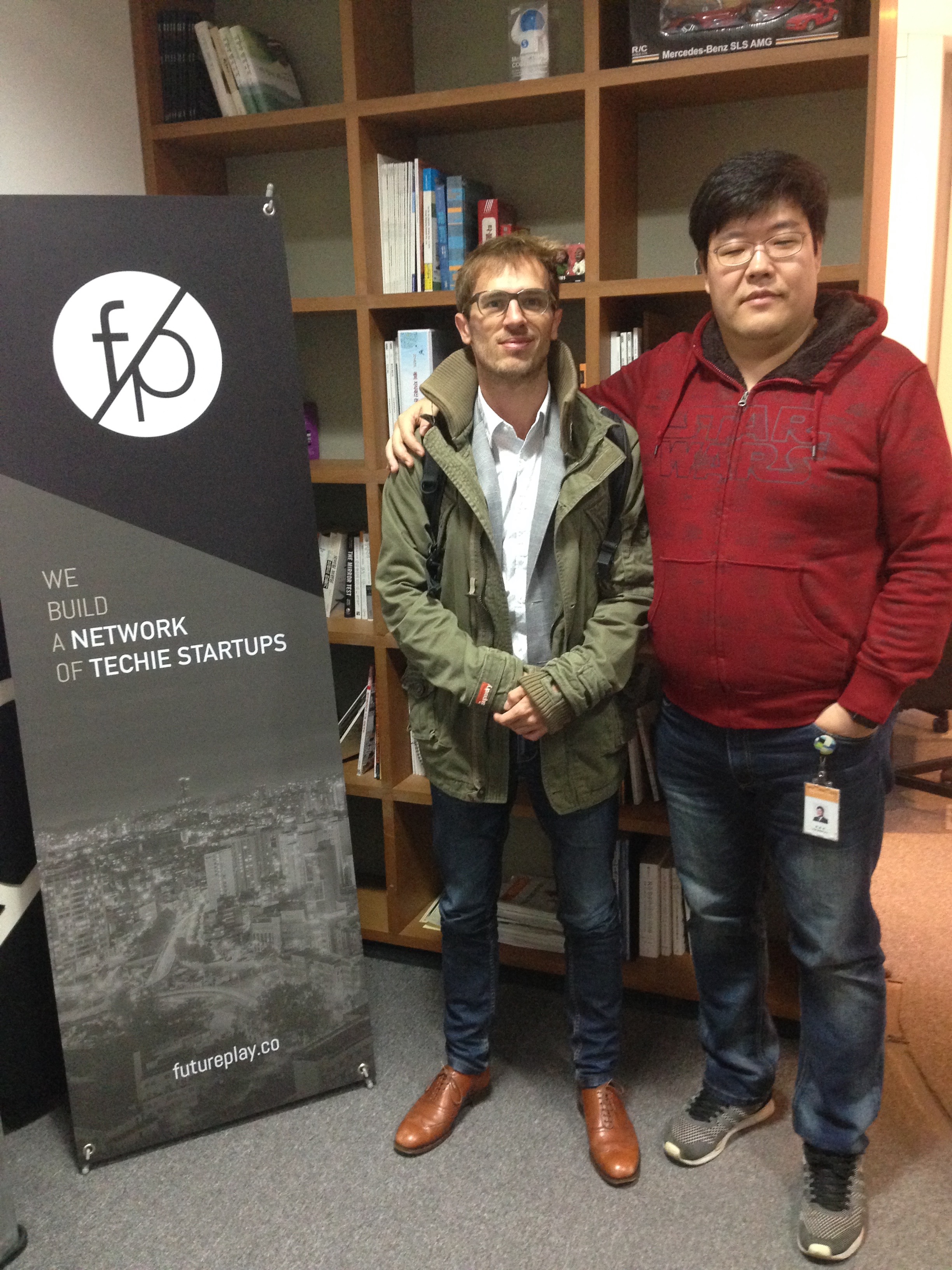 Iterations within these government schemes also help to adapt fast. Again, the culture of speed and iterations of South Korea is at play. For the angel investment laws, for instance, four major changes have been passed in the scope of just two years, letting Richard Min from +822, an event company, and also heading Seoul’s fashion tech accelerator, say that the biggest startup in South Korea is actually South Korea itself, led by its government.

There’s still a long way to go, and some loss, but it’s part of the game. Tim Chae from 500 Startups still sees the value of it: “Even if 90% of these new entrepreneurs aren’t true entrepreneurs, finding the 10% of the new talent, true founders is always worth the price.”

Beyond the surface of these shiny statistics, it’s interesting to take a look at the specialty of South Korea as a unique tech market.

South Korea is not merely the “market of the future;” more precisely, Richard Min adds, it’s “the convergence capital of the world,” where an amazing infrastructure meets a density of population, revenues and culture that has the capability to create strong local particularity. 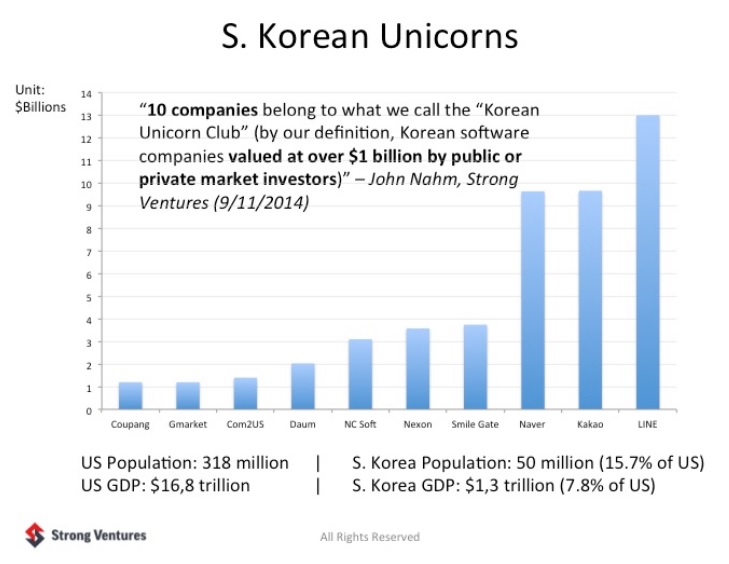 One interesting feature also detaches Korea from regional ecosystems, or even the global ecosystem: South Korea-only unicorns. South Korean tech startups can reach valuations of $1 billion and above, a feat usually reserved for startups growing in several countries, because of the high density of the local market in terms of infrastructure and revenues.

Coupang, the local e-commerce leader, has already surpassed the bar of the $1 billion valuation, and there’s still a lot of room for growth. In their latest round of funding of more than $1 billion in the summer of 2015, their founders shared that it would not be for international expansion, but rather tapping into more verticals. Other estimates in the growing fintech field alone note there could be 4-5 South Korea-only startup unicorns.

And it goes further, as Richard Min explains: “I’d have to put content and internet of things on that list. Even VR. And many would. Those areas are getting a ton of government as well as conglomerate and VC support/funding… so you can bet you’ll see people take advantage. For me “convergence capital of the world” means just that as well — converging classic giant industries with tech to bring out new disruption and innovation (hence tech, music, fashion, film as the spearhead categories for our conference), and where else but Korea (in Asia) does it make sense to bring together those industries? The point of the creative economy is to foster the one real infinitely renewable resource: creativity and innovation… and the government puts a stimulus investment to build that ecosystem to do so.”

Launching in Asia, and in the world

South Korea is also described at many of our meetings as a launchpad for mature mobile markets, as developers can experience a market where very few technology constraints exist, and invent new types of media or apps that take full advantage of the 4G and the 5G (up to 1,000 faster), which is in test today and should find its first applications available in South Korea by 2018.

Typically, streaming here is not an issue, and most smartphones can receive TV signals directly, as well.

Richard Min deems that the rise of the smartphone helped South Koreans accept foreign products and apps, and, conversely, is now allowing them to develop for overseas markets: “If Angry Birds was the first Trojan horse from the West, it also showed to younger Koreans that a career at Samsung was not the only way to be successful, hence, a new generation of entrepreneurs serving first the local market, and hopefully the surrounding countries next.” 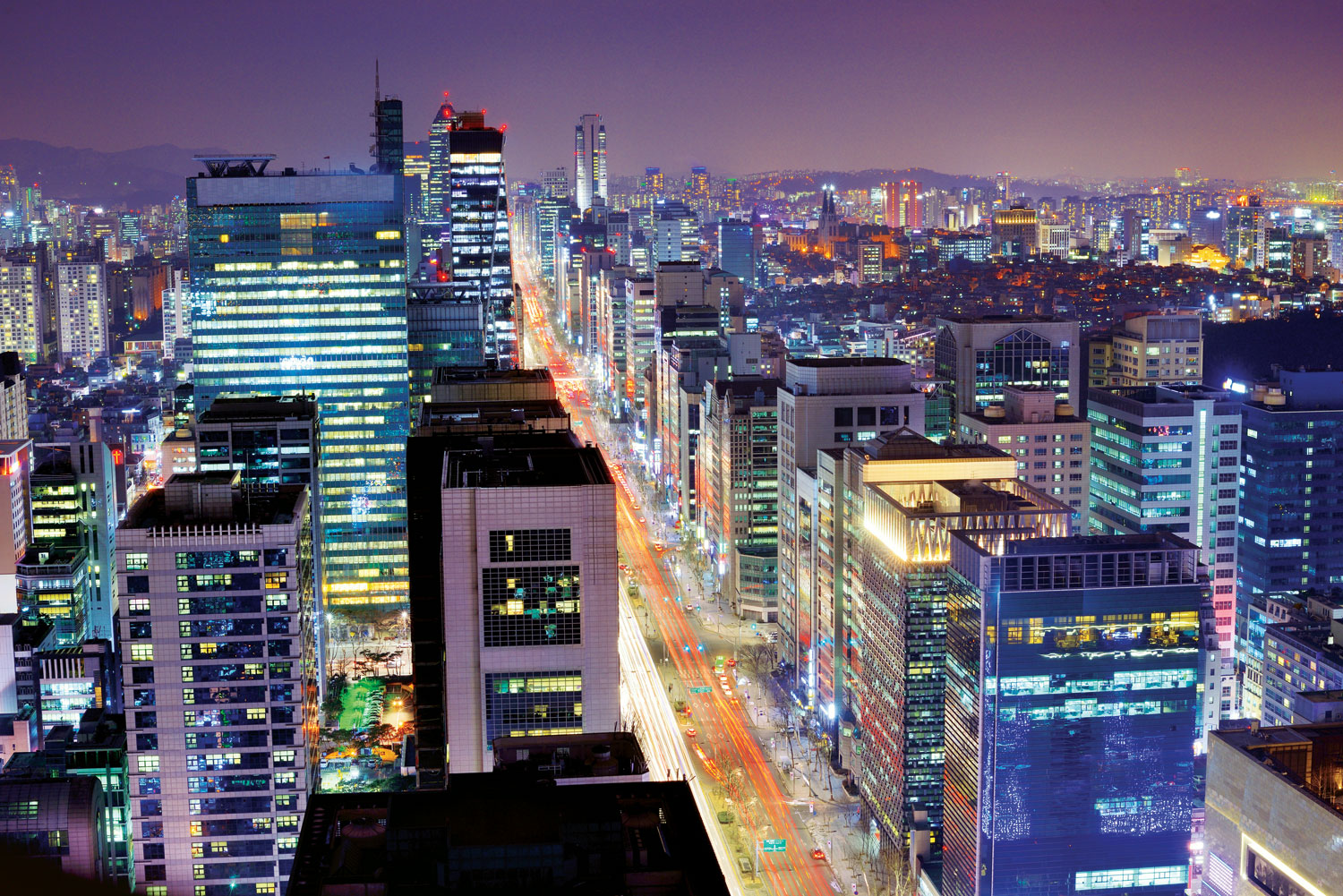 For Tim Chae, the timing is good, but more needs to be done: “There will be a Silicon Valley type of Hub in Asia within the next 5 years, it’s certain, outside of China which stands as another planet completely. Will it be Hong Kong, Singapore, Seoul?”

Regionally, the support from the government, combined with the pali-pali (fast, fast!) culture in South Korea and the first-of-its-kind mobile and Internet infrastructure all help differentiate from nearby markets.

Japan still has stronger brands, although they have been sidelined for a while (think of Sony, Toshiba or Nintendo, not to mention Sharp’s sale to Foxconn), and China is strong both on prices and now on innovation as we saw while visiting Shenzhen back in November.

So can South Korea be the “convergence capital of the world,” acting both as a test-bed for the future of mobile and a launchpad for Asia?

One of the needs people in the tech ecosystem identify is a change of mindset and a success story from the younger generations: “Today, the Coupang, the Kakao, have all been launched by people in their forties, educated in the US… we need a local “Zuckerberg,” someone young, with strong local anchors, to inspire the next generation of entrepreneurs,” adds Min.

Near-future: O2O and fintech as potential fields for unicorns

In the meantime, two fields are gathering traction and attention from the VCs. As in many emerging markets, the banking industry has been in South Korea the first to be set up, to allow all other types of transactions to happen smoothly.

In the last two years, the government started to deregulate parts of the finance industry, and P2P lending platforms have been opening, such as People Fund, which processed $13 million in 2015.

O2O is the second field where lot is happening, due to a combination of dense cities (Seoul-Incheon is the world’s fourth largest city, with 23 million inhabitants), high technology and need for convenience.

Kakao Talk, the South Korean leader in messaging apps (and a forefather of WeChat and LINE), is now entering the field in order to diversify its revenues from the sales of stickers and games. They are trying out a pilot with Kakao Farmer to deliver fresh products from farms.

Other startups include Baedal Minjok ($36 million raised in a Series D) in food delivery, and Plugger, whose promise is to deliver a fresh new car battery in case yours is dead.

The risk is that in five years, we’ll be like Japan is today

There’s a lot of activity going on in South Korea these days to prevent the decline of the chaebols, which could leave the country without a new wave to surf.

One risk mentioned by several of our contacts is the end of the mandate of President Park Geun-hye in a year and a half. Will the strong support she initiated be continued?

We’ll be visiting South Korea again in June to go deeper into our understanding of this fascinating country, and to assess what opportunities lie for MNCs and organizations interested in innovation.