The 2016 Volvo XC90 T6 R-Design has an all-new look and a powerful 2-liter supercharged engine with 316 horsepower. But this is TechCrunch, where we’re all about that tablet-like center console and pushing all the buttons to see how well the vehicle can drive on its own. 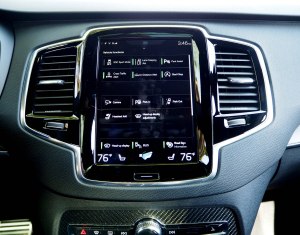 Volvo’s goal is to eliminate injuries or fatalities in crashes in its vehicles by 2020, which means removing as much human error as they can. The semi-autonomous driving features in the 2016 XC90 take a pretty big step in that direction. Whenever the SUV’s sensors can detect lanes and a car in front of it, it will handle driving tasks all on its own.

I tested this out several times during the week I had the XC90. When I was creeping along the highway under 30 mph, I could press a button in the steering wheel to let the system know I wanted it use Adaptive Cruise Control with Pilot Assist. If conditions were in place – lanes and a car to follow – the system would take over. I could do all my dance moves while Beyoncé sang about Becky with the good hair.

If the XC90 lost track of the lanes, it would ask me to handle steering duties with a ping and a message in the dashboard. This is called the “human-machine interface,” and some systems handle it better than others. I thought Volvo did well to alert me without scaring me that something was wrong. Vehicles are not yet capable of letting humans zone out completely; you still have to be alert to traffic and ready to resume control even while dancing to Beyoncé in the driver’s seat. 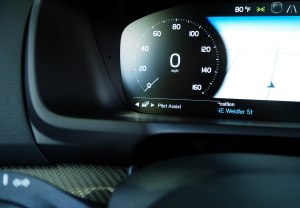 Even without using Pilot Assist, the Lane Keeping Aid used lane markers to keep me from drifting. On roads that were very familiar to me, and where I do have a tendency to drift as I take a corner, the wheel would tug a bit to put the vehicle back where it belonged. Fair enough.

But it was interesting to encounter the ethical dilemma aspect of autonomous driving while using that feature. There’s a hilly stretch of road near my house that’s popular with hardcore cyclists in training. There is no shoulder, so drivers just have to keep an eye out and pass when it’s safe. There is, however, a bright yellow double line in the middle of the road. So when I deliberately straddled the line to pass a biker making his way up the hill, the steering wheel of the XC90 tugged a bit toward the cyclist. Its programming told it that straddling the double yellow line is a terrible idea–which it usually is–without taking into account the human driver deciding not to knock over a bicyclist.

Nearly all of the technology is in place to make autonomous cars happen very soon, but it’s these tricky human decisions that algorithms can’t yet process. And Volvo’s system is gentle–it didn’t completely take over and run the cyclist off the road. It deferred to my human judgement without a fight. We worked together to parallel park; I worked the brake and gas while it did the steering. I let it drive me partway home in heavy traffic after a half marathon that turned my legs to jelly. So even using semi-autonomous features only about 10 percent of the time I had this Volvo was welcome.

The idea is to let these features take over more often and for longer as the technology evolves. Volvo is further testing semi-autonomous vehicles beginning next year in the Drive Me London program, with data analysis assistance from Thatcham Research. By 2018, the program will be testing about 100 fully autonomous vehicles on the streets of the United Kingdom.