Twitter has announced a new feature designed to make it easier for users to find interesting and relevant accounts to follow on its service: a new “Connect” tab. Available on both iOS and Android, the tab combines the ability to find friends and family from your phone’s Contact list with Twitter’s own algorithmically generated “Recommendations.”

To be clear, the ability to pull in contacts from your phone and see a list of recommended users were previously available, the Connect tab simply makes those features more accessible than before. Or as Twitter says, self-mockingly, “finding new accounts to follow used to require jumping through a few hoops and a dash of luck.”

Yikes. But yes, that would be an accurate description of how people-finding previously worked.

As before, Twitter’s own recommendations are based on a variety of factors, including things like who you’re following now, tweets you’ve liked, popular accounts in your local area, what’s happening in the world right now, and more. Twitter says it will also explain why it’s making these recommendations in the new “Connect” tab – meaning, you’ll see headings like “Because you follow…” along with a list of Twitter accounts, for example, above Twitter’s suggestions.

These are organized into sections in the Connect tab, with the option to click on “More” to see more recommendations in some areas. “People You May Know” and “Popular Near You,” however, get more screen real estate as they’re presented as cards you can scroll through horizontally.

Meanwhile, “Trending Now” recommendations gets the biggest billing at the top of the screen to point to currently newsworthy accounts in an automatically updating banner. This also ties into Twitter’s decision to position itself as a “News” app instead of “Social Network” – something that recently prompted its move to the new category in the iTunes App Store, in fact.

The company says its recommendations will also be improved over time.

Also of interest: at the bottom of the new Connect tab, Twitter has chosen to recommend its own official accounts in a dedicated section.

The feature is rolling out now in the updated version of the Twitter mobile app on iOS and Android. To access it, you’ll see a little blue prompt introducing the Connect tab once it becomes available to you. This appears in the upper-left of the screen, by the “add friend’ button. 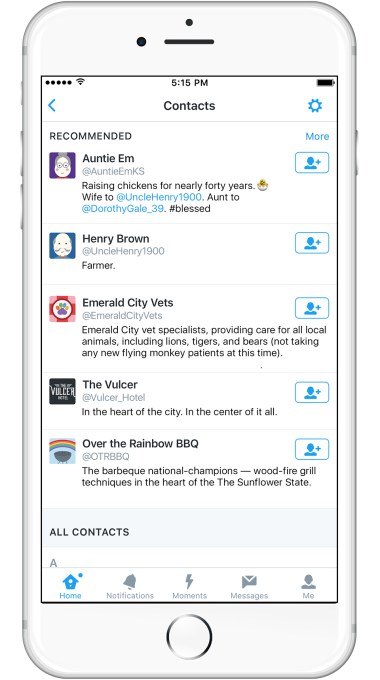 The feature’s release comes at a time when the company is struggling to grow its user base. Currently, Twitter has a sluggish 310 million monthly active users, only up from 305 million in Q4 2015. The hope is by making it easier for Twitter users to find interesting accounts to follow, the company could increase usage and engagement with its service.