“Project Include started as dinner brainstorming sessions on how to make tech meaningfully more diverse,” Pao said in a release. “Today we’ve joined forces to provide CEOs with comprehensive tools–frameworks, research, metrics, and recommendations–for diversity and inclusion. And the early feedback we’ve heard repeatedly from CEOs is, ‘I wish I had had this earlier.’” 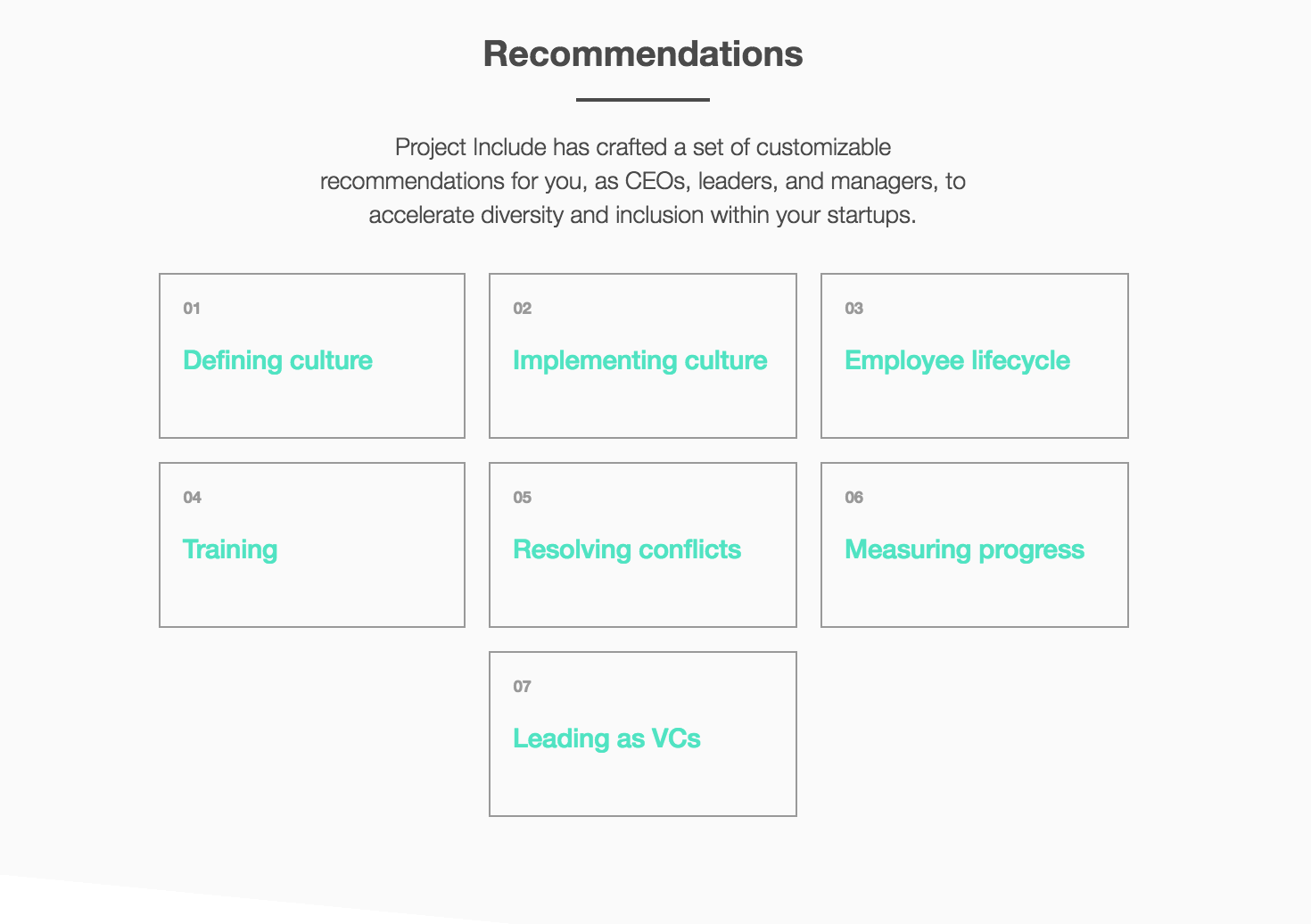 What you see above is the result of a roughly 85-page document on best practices for startups to become more inclusive. If you decide to explore Defining Culture, for example, you’ll see recommendations like “commit to inclusivity in the company culture,” “include transparency in company values and culture” and “define and share clear compensation bands.” Project Include also offers recommendations for VC firms like applying metrics to portfolio reports and valuing the effort it takes to go into diversity and inclusion efforts.

One section that really hits home for me is around measuring progress. The last couple of years have been filled with diversity reports with stats around gender, race, POC and women in leadership positions and technical roles, and so on. In the last few months, we’ve started seeing stats around LGBTQIA populations at companies as well as representation of people with intersectional identities, such as POC and female, or POC and LGBTQIA. But we have yet to see any sort of standard best practices emerge for reporting diversity and inclusion, until now.

“The wrong metrics can present a misleading view of system health, and optimizing against them can produce distorted outcomes,” Project Include states. “There is danger in vanity metrics, which provide good optics but lack significance. For example, some companies include non-engineers in their definitions of their engineering teams, artificially inflating their diversity numbers with groups that are usually more diverse. Internally, this can erode trust with employees who see a lack of diversity on their teams, and can delay identifying and addressing problems, while externally, it can lend a company artificial weight as an industry leader.”

That said, Project Include recommends companies prioritize the following metrics:

With the following inclusive demographic breakdowns:

If you want to hear more about Project Include, I’ll be talking to Erica Baker next week at TechCrunch Disrupt NYC.