D.J. Sherrets Contributor
D.J. Sherrets is a product designer in New York City and previously worked at Google.
More posts by this contributor

Despite all of its new bells and whistles… and the billions of videos, ads, and effects that have been added to the service, Snapchat chief executive Evan Spiegel still thinks of the new media juggernaut he’s created as “a camera company”.

Speaking at Columbia University’s #StartupColumbia event on Friday, Spiegel ran through a number of the defining features of the company that now accounts for more than 10 billion video views on various mobile devices.

The runaway success of Stories, Snapchat’s video and photo watching tool, even caught Spiegel by surprise. “Stories blew us away,” he said. “What was envisioned at the time as an ephemeral profile — this is who I am right now — has become a lot more… To watch the evolution of Stories into more of a broadcasting platform [and] away from just a profile-based concept where it started is very exciting.”

While Snapchat Stories may be the feature that brings the company the revenue model it needs to validate its $16 billion valuation, and while the ephemeral messaging feature may be what initially attracted the hordes of millennials sending digital ephemera to each other billions of times a day, Spiegel says that the camera itself remains Snapchat’s unifying feature.

“The beautiful thing is it sort of sits in the middle, but more importantly it opens to the camera,” Spiegel said. “The thing that feeds a social network is content… Similarly with communication… So in our view, when you take a snap and you choose this path between talking to your friends or adding it to your Story we end up with this harmony where both of these businesses feed themselves. I don’t think it’s one or the other.”

In a way, even the company’s movement into filters, stickers, and lenses such as face swap are further extensions of the original thesis of Snapchat as a photographic communication tool. “Now you can put the way you feel… in the moment you’re experiencing. For us that’s just the beginning of some fun, creative tools,” he said.

Looking beyond the product, on which Spiegel said he spent 40% of his time, his other duties are recruiting (which occupies another 40% of his time) and then the other operational decisions that go into running a company. 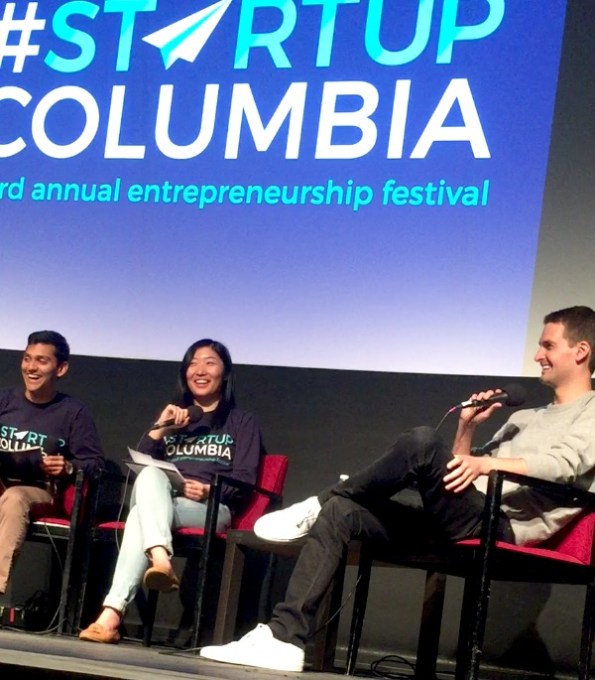 Over the course of his conversation with students and interviewers Columbia undergraduates Karen Yuan and Mayank Mahajan, Spiegel reminisced about the early days of growing the business and the time of the key decisions that influenced its growth.

From its earliest days, and in its earliest decisions, Snapchat and its college-aged executive focused on recruiting dedicated employees who would be committed to the company’s long-term success.

Spiegel said that everything from the decision to move to and stay in Los Angeles and the creation of a backloaded vesting schedule which increased from 10% the first year to 40% the fourth year was designed to self-select employees who believed in the company and its project. “If you think four years is long-term, then we’re not really interested in working with you.”

Spiegel said this aspect of company-building, the recruiting, is one of the critical attributes of a good entrepreneur. “Building a team is the most important thing you do, and if you don’t genuinely just love the people you work with and take care of them… and (care) about their families and their lives, then it’s a non-starter because you’re not going to be able to build a great team.”

Snapchat’s young founder also had advice for budding entrepreneurs about accepting capital and the nuances of working with venture capitalists. A number of the questions focused on Snapchat’s early days, including about the first financing round.

Spiegel advised to never accept if someone says terms are “standard,” and described a right of first refusal term in the Snapchat convertible note seed round of requiring access to 50% or effectively the majority of the Series A round that came the following year.

Spiegel said this kind of term can discourage possible investors who seek to own a larger stake and so may not bid at all. This and other terms were unwound over time, he said. “The big, simple takeaway is anytime you hear ‘standard terms,’ keep asking why, and why, and why, and why,” he said.

Asked about the difference between entrepreneurship in college compared to after college, Spiegel cited the need to balance but ultimately needing to make a choice to go for building a meaningful company.

“I think some point as early as sophomore year my classes started taking a hit because I was working on projects all the time, but if you’re ok with getting bad grades, then it doesn’t really matter,” Spiegel said.