This week was completely loaded with earnings reports from some of the biggest tech companies in the world — and it was a crazy week of swings for most of the companies that reported.

There’s a running theme here: growth is being heavily rewarded — and lack of growth, punished — by Wall Street. And that’s especially true when it comes to more mature companies. While Facebook handily beat expectations on earnings and revenue, it also showed that the company still continues to grow at a healthy clip in terms of both generating cash and adding new users. Looking back at Apple, it’s clear that the company isn’t growing. It’s, in fact, declining.

Here are the ups and downs for the end of the week. We’ll wrap in Microsoft and Alphabet for this one as well:

And then there’s the big one.

Apple: Down 11% after a complete whiff on earnings and posting its first sales decline in 13 years, along with its biggest activist investor dumping his stake in the company.

In short, the week was pretty mixed, and showed off a couple of key points.

First, Twitter’s loss is basically Facebook’s gain. Any concerns that there would be softness in the advertising market after Twitter said brand marketers did not increase spend as quickly as expected in the first quarter were probably thrown out the window following Facebook’s blockbuster earnings. Twitter reversed its user number decline by adding a few more million users than expected, but its revenue is not growing as quickly as expected — so the stock got hammered, while Facebook soared.

Second, and more importantly, is that Apple’s growth engine has slowed down. The company said it sold 51.2 million iPhones this quarter, compared to 61.2 million iPhones in the last quarter. Apple has become a bellwether for the tech industry — if it’s down, something must clearly be wrong — but this time around it’s Apple’s woes that caused Wall Street to erase tens of billions of dollars in value from the company.

And finally, Amazon is appears to be turning into the monster that Wall Street expected it to be all along. The company is rapidly scaling up its Web Services business — now generating $2.57 billion and, as Bezos says, hopefully on track for $10 billion annually. But perhaps more noticeably, Amazon posted four straight quarters of a profit. For a company that’s traditionally been pretty meh when it comes to generating profits, this seems like a pretty significant moment for the company as it continues to expand its new line of business, and grow internationally. 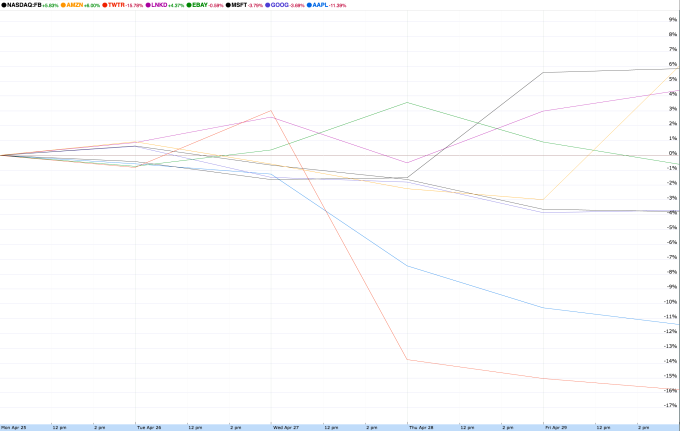 Stock prices tend to move quickly on earnings reports — and whether or not companies are performing to expectations of industry watchers and investors. These companies are all, in many ways, beholden to the people who have bought up some ownership of the company, whether that’s a duty to increase the value of the stock or return value to shareholders. (Though, Facebook may be somewhat of an exception depending on whether shareholders approve a new stock structure for the company.)

If stock prices continue to go down, it increases risk for companies on a couple of fronts. First, stocks are a key part of compensation for many companies trying to attract talent, and if the price keeps dropping the amount of money a company can offer a recruit drops with it. Second, it can attract investors that will buy up a lot of stock in a company — like Carl Icahn, who pressured Apple to return more of its massive cash pile to shareholders — in order to push companies to shift their strategies.

Many of these companies are still printing money. Apple and Google generate billions of dollars in profit, and Twitter is still generating hundreds of millions of dollars in revenue. But the point everything always comes back to is growth — can these companies show that they can grow at a sustainable pace and continue to increase their value. That’s going to determine whether investors are going to want to own shares of the company, which will drive up the stock price and make it easier to get things done without facing pressure from Wall Street or having issues attracting talent.

There are still a few more earnings reports to come — they’re mostly small fry compared to these companies — but we should probably expect to see the same trends: growth will be rewarded, and companies with a lack thereof will see their value challenged by Wall Street.