Less than a year after it brought on investors to help crack the Chinese market, Airbnb is going after another Asian mega-country with a billion-plus population: India.

Airbnb turned to investors China Broadband Capital (CBC), Hillhouse Capital and Sequoia China in China, and it has teamed up with media giant Times of India Group in a deal focused on localization and execution. The tie-in does also include a Times of India investment in Airbnb .

Times of India said it will use its range of media, which includes newspapers/onlines Times of India and Economic Times, to “drive awareness of Airbnb accommodations, and help Airbnb create a truly localized presence for India.”

“We will provide support on operations, hiring, strategy and advertising, to make Airbnb’s entry and operations in India as effective as possible,” Satyan Gajwani, managing director of Times of India’s digital arm Times Internet, told none other than Economic Times.

The deal for Airbnb, which raised a massive $1.5 billion from investors in December at a valuation of at least $25 billion, is similar to partnerships that Times of India has struck with other global tech firms keen to enter India, where growing smartphone sales are projected to drive the number of internet users past 500 million by 2017.

Airbnb clearly sees that potential. Speaking last year, its head of operations Varsha Rao said that India’s travel market could be worth $40 billion within the next five years. Airbnb already has operations in India and last year it made Amanpreet Bajaj, who founded Flipkart-owned LetsBuy.com, its new country head, but now it aims to go deeper. 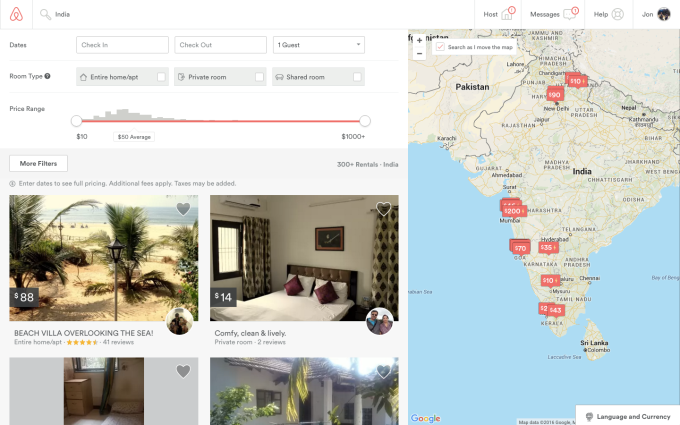 Some of Airbnb’s stays in India

Times Internet is an Uber investor-partner, while it has deals with Business Insider, Coursera, and Huffington Post among others. Times Internet caters to this segment of global expansion into India with ‘Times Global Partners,’ an initiative that pools its resources to help with localization and India launches.

Airbnb CTO and co-founder Nathan Blecharczyk said in a statement that the company is “working on adapting our product for the Indian market so that Indian travellers can live like a local anywhere in the world.”

Like China, the market isn’t just about overseas travel, there’s plenty of money being spent inside India’s itself. And there’s plenty of competition there, too, thanks to budget hotel networks like OYO Rooms, which landed a $100 million round led by Japan’s SoftBank last year. OYO Rooms, and others like it, are focused on offering a standardized hotel experience on a budget in India, where accommodation searching and booking remains an offline experience in many parts of the country. Airbnb, on the other hand, primarily sells itself as an experience marketplace — that’s to say that each potential accommodation option is unique in a positive way. (According to its marketing, at least.)

Airbnb seems likely to push its affordable stays while also seducing Indian consumers wanting to travel with its two million listings, which cover more than 34,000 cities across some 190 countries worldwide.