As a Berlin-based VC firm focused on SaaS, we often get questions about the current state of the European cloud software landscape. To be able to answer these questions more precisely we decided to analyze each major European ecosystem, starting with France.

Our goal was to find all the relevant players in the French cloud ecosystem — from early-stage startups to large public companies — and put them on a map. The result, below, shows more than 200 cloud software companies across more than 15 categories. 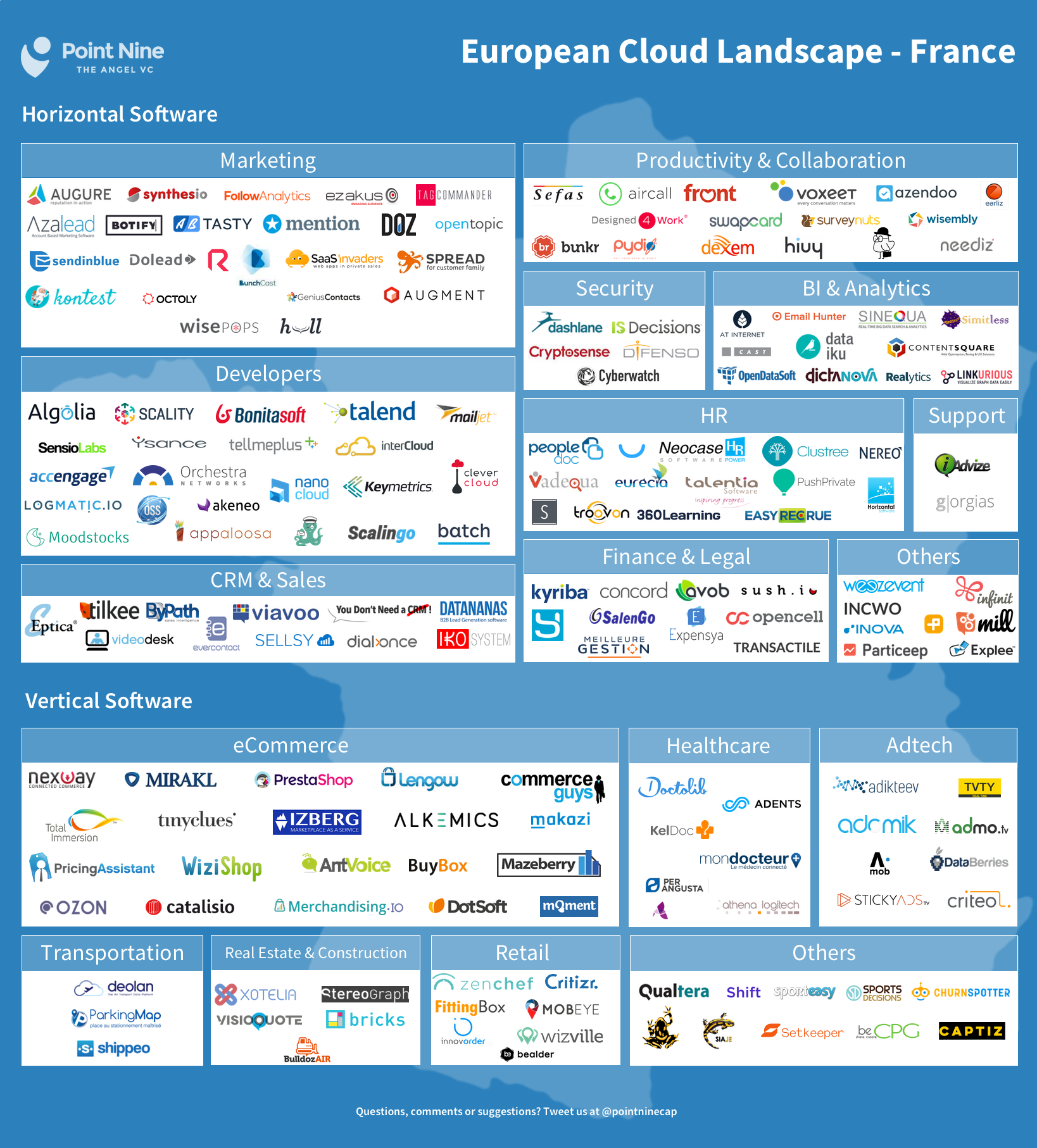 Our research revealed a couple of interesting insights. Here are six of them.

The top three software categories (Marketing, Developers and Productivity & Collaboration) account for more than 50 percent of the companies in our data set. Marketing and developer tools alone account for almost 38 percent of all companies. 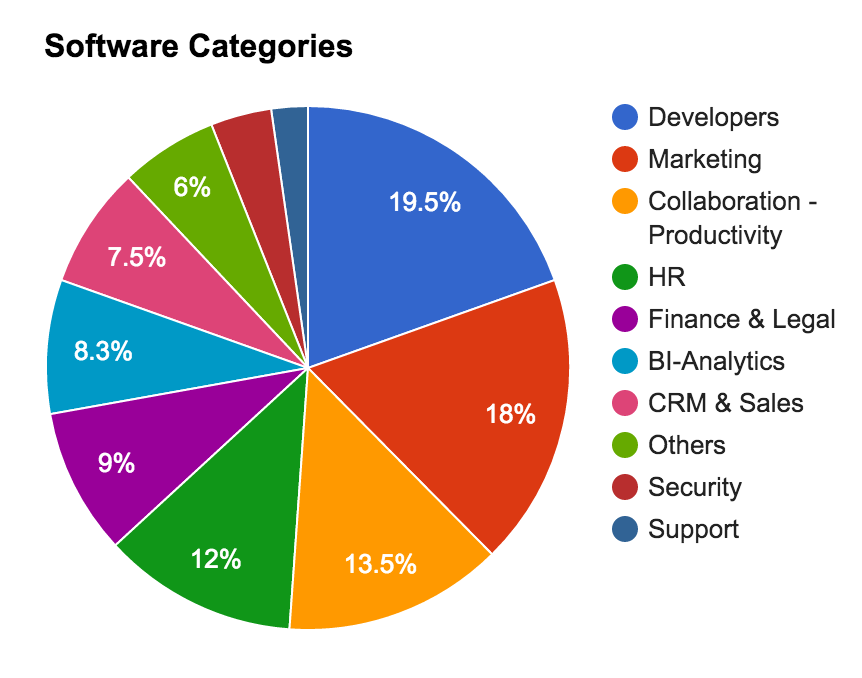 These categories also attract the most money from VCs

When we only take into account VC-backed companies, we can see that the distribution looks very similar. The only big change is that the Marketing category jumps from No. 2 to No. 1, with 23.4 percent of the companies listed. 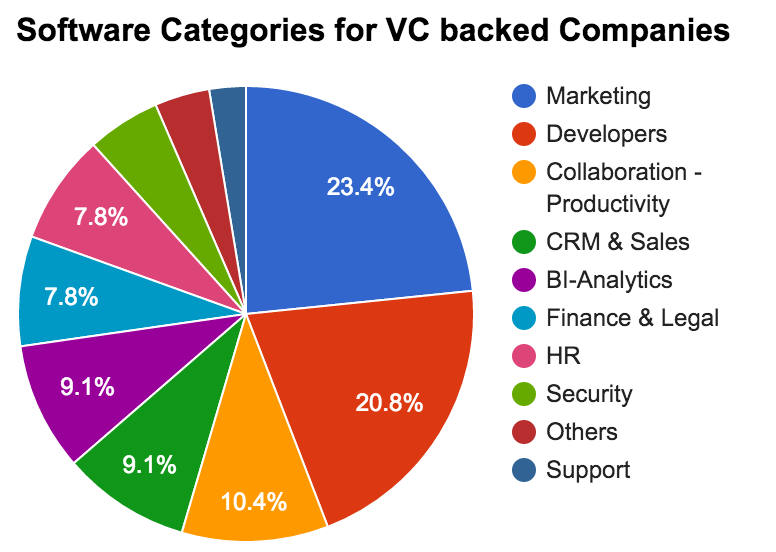 This trend is confirmed by the median funding size by category: 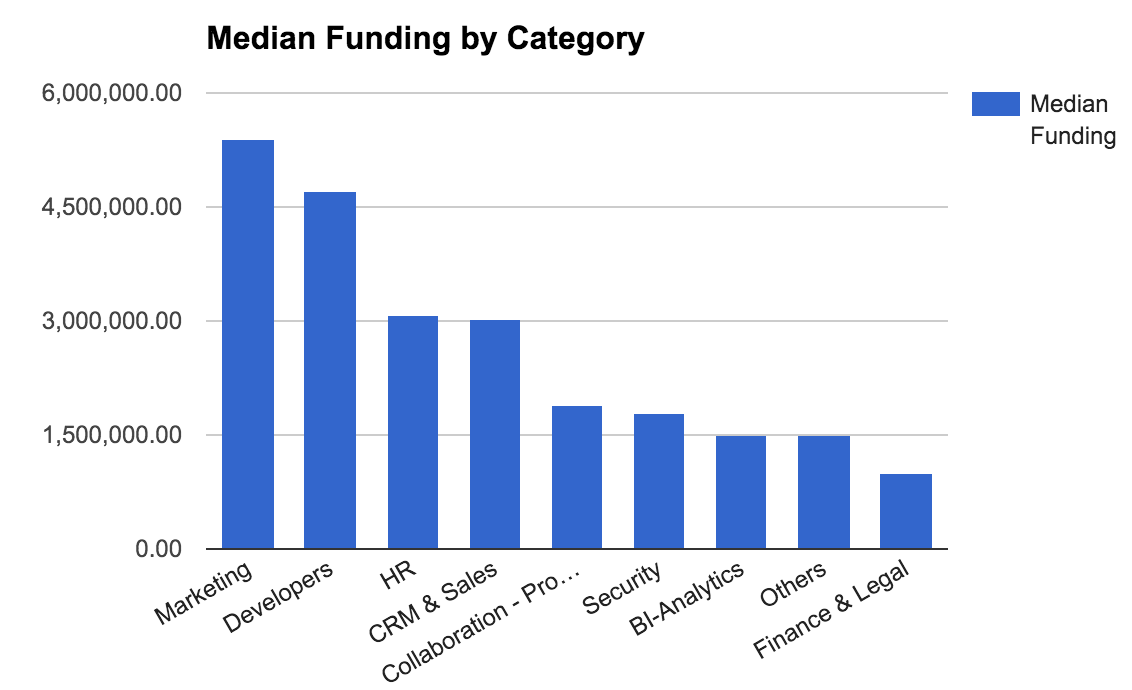 The median funding values for the Marketing and Developers categories are the highest of our batch, with $5.4 million and $4.7 million, respectively, followed by CRM & Sales and HR, both at $3 million. The rest of the categories stay under $2 million.

Many French global cloud companies are born in France, but raised in the U.S.

If we only look at companies that have raised more than $15 million (15 companies in total), more than half (nine) have moved their headquarters to the U.S. Twelve have permanent offices in the U.S.

This is an important trend, because, for a majority of these companies, the U.S. is their biggest market, and moving their headquarters to San Francisco or New York is key in capturing it. It also grants them better access to capital. That being said, they all keep offices in France (mainly for engineering). 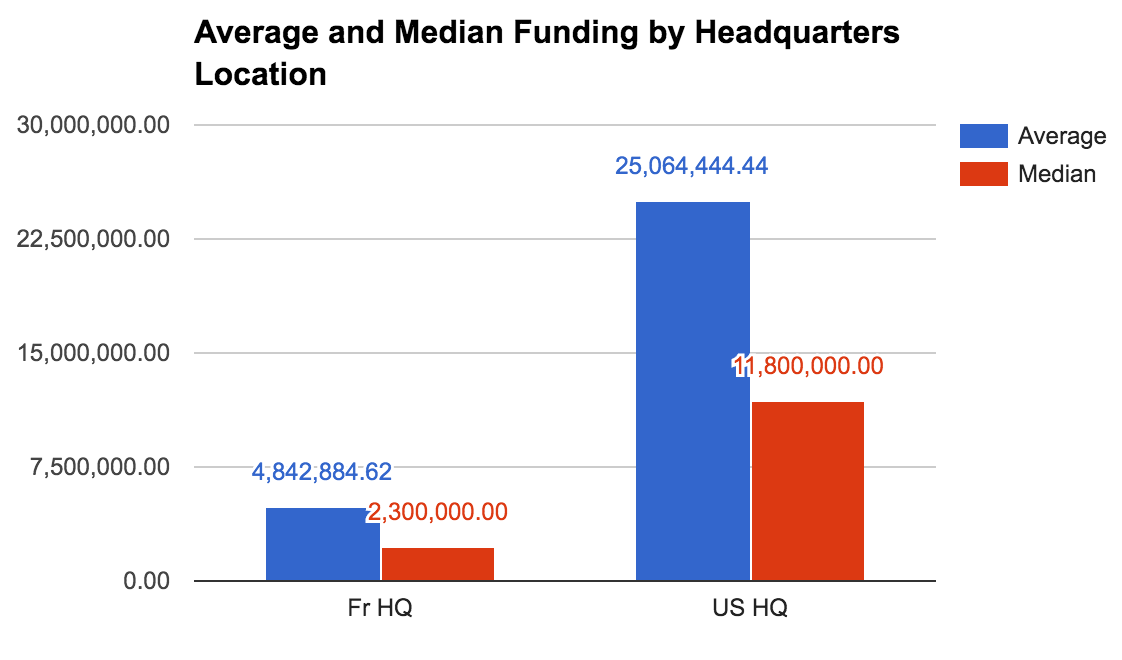 As you can see, there is a huge difference between the median and average funding values depending on where the headquarters are located.

Interestingly, this trend does not only apply to well-funded startups. More and more early-stage startups take the opportunity to go to the U.S. thanks to programs like Y Combinator, Techstars or 500 Startups (e.g. Front).

The bridges between the U.S. and France are strengthening.

Surprisingly, it’s not about the West Coast and San Francisco only; 44 percent of the VC-backed French startups with U.S. headquarters are based in New York. 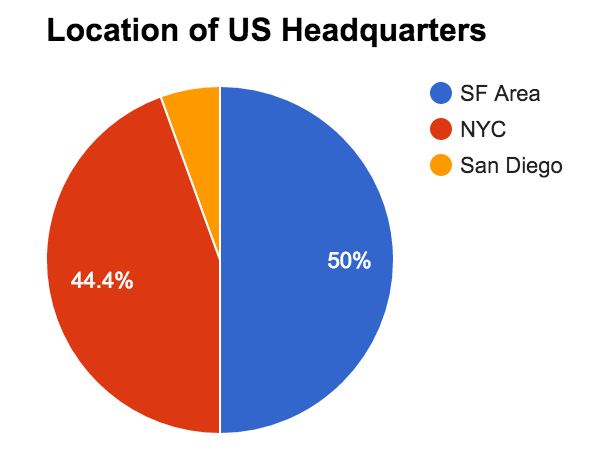 First, a few words on the distinction between vertical and horizontal software:

Here is the percentage of vertical versus horizontal companies in our list: 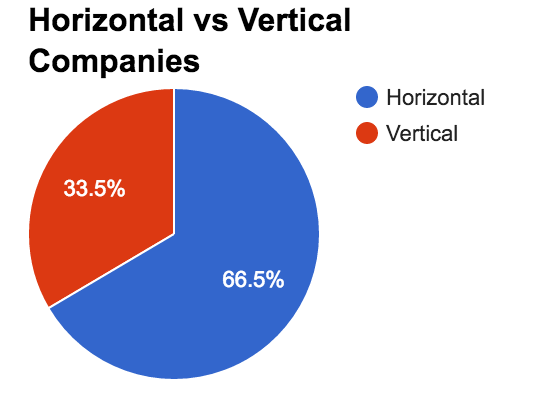 More horizontal companies are created and funded compared to vertical ones, which is normal because creating vertical software requires industry-specific knowledge and experience, which is more scarce.

From a funding perspective, the median values for horizontal and vertical companies are almost the same ($2.5 million versus $2.3 million): 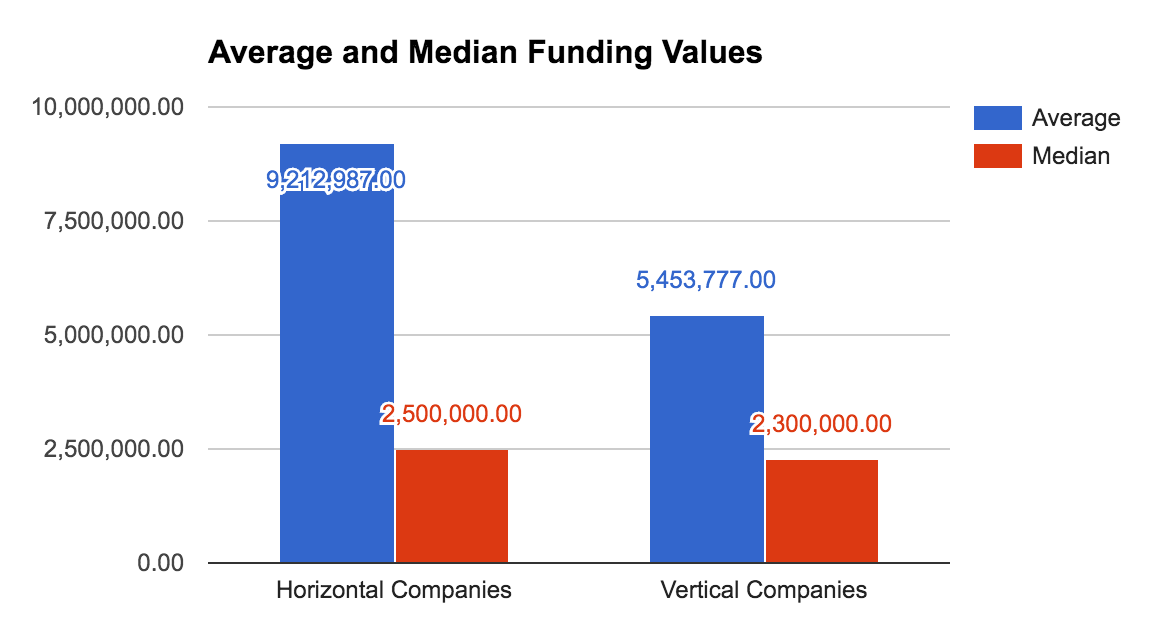 But there is a huge difference for the average values ($9.2 million versus $5.4 million). The explanation is that, obviously, at the higher end of the spectrum you’ll find many more horizontal companies that have raised hefty rounds.

If we look again at the 15 companies that have raised more than $15 million, 12 of them are horizontal and three are vertical. Clearly, big horizontal companies raise more money.

When we dug deeper in this list, we noticed an interesting difference. In general, the successful horizontal companies were “global companies” earlier in their life. They get traction while still in France (or built a first version with their engineering team in France), then raise big rounds and move to the U.S. to compete internationally while keeping their engineering office in France (e.g. Algolia).

The playbook for vertical startups is different, as they often need to dominate their home market first before expanding in a region/country. They keep their headquarters in France and open offices where they expand. Becoming global takes longer, and capital access is slightly different. This is mainly because vertical software is much more geography-dependent (local legal specificities, local industry rules, customers, culture, etc).

But things are changing with the maturation of the market. Of the three vertical startups that raised more than $15 million, two of them are relatively young companies (Mirakl, 2011 and Doctolib, 2013), and they all received funding from U.S. investors while still headquartered in France.

So, with the maturation of more and more verticals, we can expect this gap to narrow.

When it comes to e-commerce tools, the French are real pick and shovel sellers

One vertical clearly stands out when we look at our map: e-commerce. 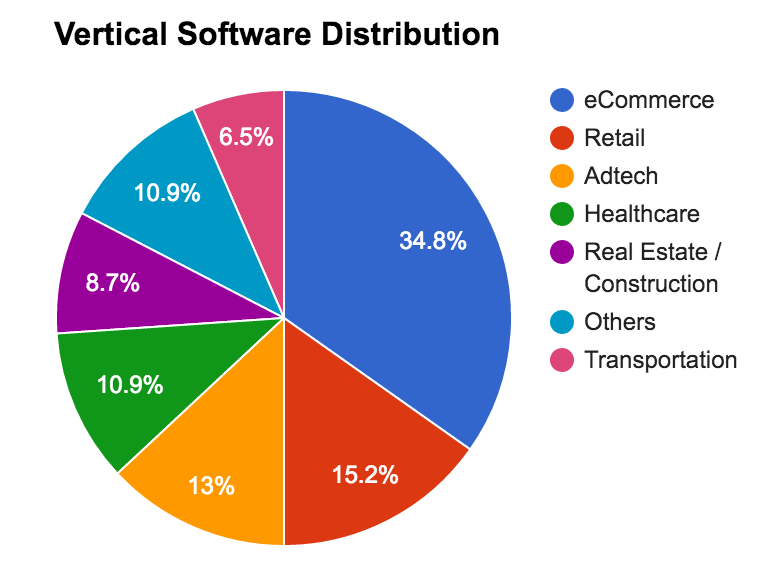 France is pretty strong when it comes to e-commerce tools, with promising companies such as Mirakl, Lengow, etc.

This landscape provides an interesting picture of what a typical French SaaS company looks like. In terms of how this picture will evolve, there are two key trends:

More bridges between France and the U.S. There are more connections between France and the U.S. thanks to startup programs like Y Combinator, 500 Startups, Techstars, etc. and initiatives like Stripe Atlas. With local French players (accelerators) building relationships with their U.S. counterparts, we’ll see more and more French SaaS going to the U.S. at an early stage. But because it’s so competitive to hire engineers (East Coast or West Coast), a majority of them will keep strong roots in France.

More vertical champions. We’re also witnessing the opposite trend with promising vertical startups that are growing fast while staying in France. As explained above, internationalization is much more complicated and geography-dependent for vertical software. And because many verticals are finally getting mature, we’ll see an increasing number of vertical SaaS champions staying in France and expanding in Europe first.