Since its earliest days Apttus has always been a Salesforce shop. It’s built on the Salesforce platform and worked exclusively with Salesforce CRM, but that changed today when the company announced it would also be supporting Microsoft Dynamics in the future.

There seemed to be a shift in the company’s thinking at the end of last year when Salesforce bought SteelBrick, a fellow quote-to-cash vendor for $360 million. While Apttus remains loyal to Salesforce, it also recognized that it needed to expand its markets if it wants to continue its march to IPO.

“When you’re going through IPO, you don’t want to give investors the idea there is a constraint on the platform. When you get to hundreds of million of dollars, you need to expand on other platforms,” Apttus CEO Kirk Krappe told TechCrunch.

One of the reasons Apttus looked to Microsoft was it saw tremendous market potential. While Gartner estimates that Salesforce controls more than 18 percent of the market (significantly more than any other single vendor), Microsoft has more than 6 percent and doesn’t include a single vendor offering a soup-to-nuts quote-to-cash offering, according to Krappe. Apttus saw a market opportunity and seized it.

What’s more, while it might appear from the outside this was a reaction to the SteelBrick sale — and on some level it does appear to be about sending a message to Salesforce– Krappe says the company has actually been working on this since last June, well before the SteelBrick sale was announced. 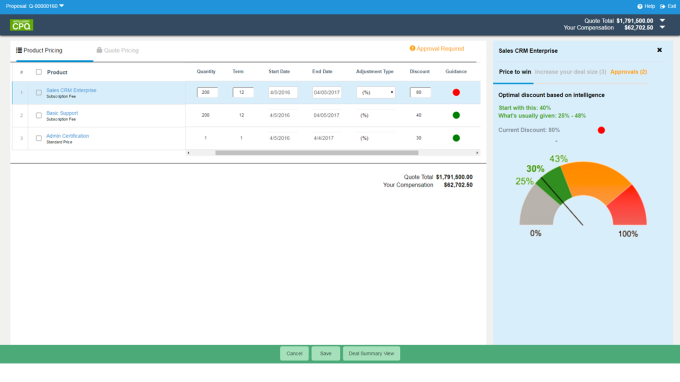 Regardless, Apttus still gets the vast majority of its revenue from the Salesforce platform, works closely with the Salesforce sales team and even has 15,000 users inside of Salesforce itself, but Krappe didn’t want to be limited as he looks ahead. In fact, he hinted that it would be supporting a third company some time later this year. The most obvious suspects would be Oracle or SAP, which have 9 and 12 percent marketshare respectively, according to Gartner.

Apttus has had discussions with Salesforce about this move — Salesforce Ventures is a significant investor — and pledged to stay out of the way when there is competitive bidding between the two companies. What it plans to do is to go after large existing Microsoft customers such as American Airlines, customers that are solidly Microsoft shops and could benefit from a quote to cash offering.

Even while Apttus is looking to expand its market opportunities, it’s also announcing expansions to the product too with a new Incentives Suite and Intelligence Suite. The Incentives, as the name implies offers a way to drive sales through incentives to sales teams and third parties. The Intelligence piece uses machine learning to help sales people do things like find the most successful quote packages put together by the highest earning sales people.

With the current market conditions not terribly friendly to IPOs Apttus, which had openly discussed an IPO this year is now looking ahead to next year, perhaps as early as the first quarter. It’s already working with Morgan Stanley and has put together an IPO working group in-house, which is charged with preparing for when the company files an S1, signaling its desire to go public.

Apttus has raised $186 million. The most recent funding came last September in the form of $108 million Series C.