Microsoft’s recently launched, A.I.-powered bot Tay may have embarrassed the company when Twitter users taught the machine how to be racist, but Microsoft hasn’t given up on the future of bot development. It’s just getting started. At Microsoft’s annual Build conference in San Francisco today, CEO Satya Nadella unveiled the company’s plans to bring the world of bots to “conversational platforms” – meaning not only Skype, but also other communications tools like Slack, Outlook, LINE, and more.

News of the bots’ unveiling was previously reported by Bloomberg, but today’s onstage demonstrations revealed how bots, including Microsoft’s own virtual assistant Cortana, aim to help pave the way for the future of communication, productivity, and interactions with businesses and brands.

In Skype, the company showed off rich Cortana integration which put the assistant directly into the app where she could help users do things like identify the persons, places and things in your messages, underline them, and then display more info in a card-like interface when clicked.

She is also able to help you perform a variety of tasks, like adding items to your calendar, booking travel or hotel rooms, or even pre-populating conversations to friends with text.

What’s interesting about Cortana’s integration in Skype is how it has a larger understanding of everything you’re chatting about and doing – it’s not just focused on the single task at hand.

For example, in the demo shown today, Cortana was able to figure out that the user was attending a conference referenced in a personal chat with co-worker, block calendar and travel time for the event, and then even proactively introduce a hotel bot into the conversation to suggest hotel rooms.

The Westin bot, then, popped up, displayed a variety of room choices with image thumbnails and pricing. In two steps, the hotel room was booked and the information was added to the user’s calendar automatically.

And because Cortana understands a user’s connections, she also suggested that the user message a friend who lived in the city – and even helpfully wrote some of the message text to the friend on the user’s behalf. 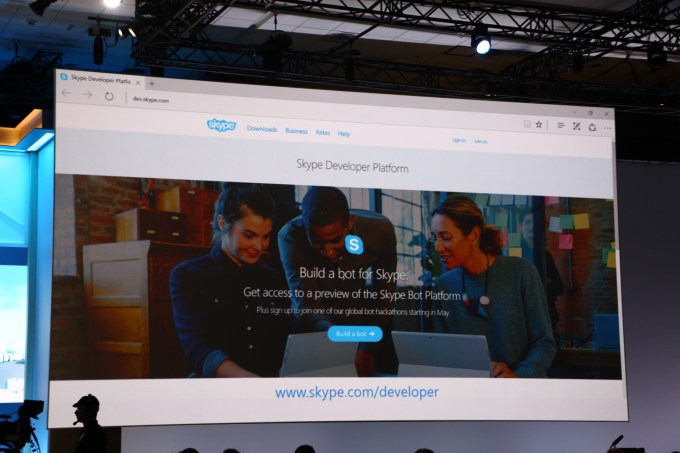 The bots’ integration in Skype is rolling out today on Windows, iOS and Android as a preview. This includes a way for users to test Skype Bots and offer feedback.

As a side note, Skype for Hololens went live today, too, but without bot integration.

Though Cortana is Microsoft’s leading “bot,” it’s just one example of the future of bots, in Microsoft’s vision. The company also unveiled a larger agenda aimed at helping developers build their own bots for Skype and elsewhere.

The company launched the first-ever Skype Bot SDK, which lets brands, businesses and other third parties create their own bots that can work on Skype, seamlessly integrating into users’ chats. These aren’t just text bots, as many of the SMS-based virtual assistance startups we’ve seen so far – Skype bots can introduce both audio and video experiences, the company said.

One example of this is Skype Video Bots, which offer a different take on video calling – basically, you can Skype call a bot in a virtual environment.

For Microsoft, bots aren’t just a handy feature to help get more people using Skype, or taking advantage of its Bing-powered assistant Cortana. Skype is used by over 300 million connected users each month, the company reminded conference attendees, but the potential for bots scales far beyond Skype’s user base.

According to Nadella, bots are the next applications – and they make using technology to interact with businesses and services easier for many users who are confounded by the numerous mobile apps available today, or who are frustrated by navigating the endless sea of websites. Bots work better because you simply talk to them, using natural language. 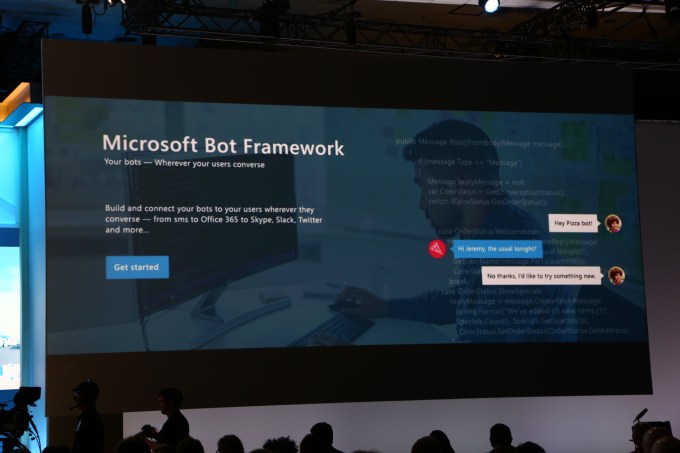 “We want to take that power of human language and apply it more pervasively to all of the computing interfaces and computing interactions,” he explained. “Bots are like new applications that you converse with – you’re not really looking for multiple applications, or pages and pages of websites,” he said.

The company is also launching a bot directory, giving us a brief peek at a few bots it had created itself. This includes a BuildBot which helps attendees navigate the conference itself; a Bing News bot and another Bing Image bot, both that help you navigate the web with bots; a caption bot which understands images; and a Bing Music bot that search for YouTube, Vevo, LyricFind and more for songs. 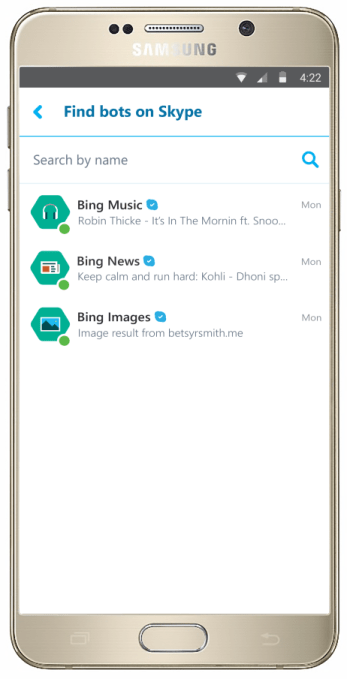 Bots “represent a huge opportunity to write new types of applications,” Nadella told developers, adding that bots will be “core – like .NET was – to all apps going forward.”

Preview Bots are available now in the latest versions of Skype for Windows Desktop, Android, iPhone and iPad. Skype’s Developer Platform and bot creation tools are here. And the Microsoft Bot Framework is here.