While improvements in camera-phone technology have led to our mobile devices slowly but surely replacing clunky single-purpose cameras, most heavy editing and production still has to be done on desktops. This is especially true for live video, which often requires a full mixing board and production studio.

Enter Switcher Studio, a mobile production suite that lets you use an iDevice for live video mixing and production.

In its most basic form, Switcher Studio lets you record HD video from the built-in camera on your iDevice, which can either be recorded and edited, or streamed live directly to sites like YouTube, Ustream, and Twitch.

But, the magic happens when you enter Director Mode. This is when you disable video recording on your main mixing device (probably an iPad), and wirelessly connect up to 4 other iOS devices, all which can be used as video sources. 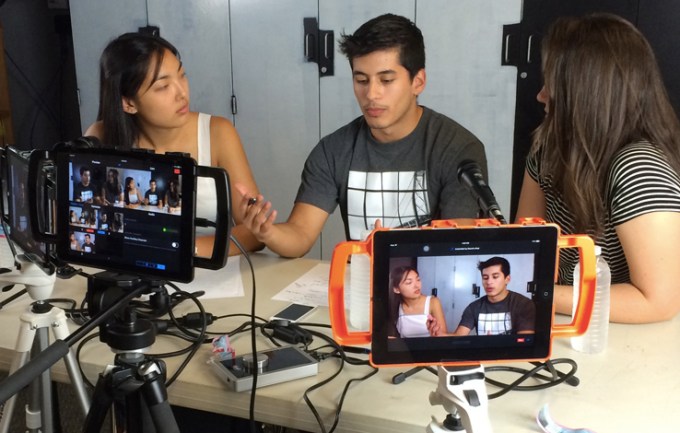 These additional cameras can then all feed live video into the main device, essentially turning your iPad into a multi-camera live production studio. You can even add a laptop as one of the video sources, in case you want to do things like add web browsing or a Powerpoint presentation into your production.

The studio also includes a bunch of editing features designed to make your video look like it came out of an actual studio. These include transitions, picture-in-picture, and TV-style graphics and overlays. These edits can either be done in real-time, or in post production after your recording is done.

The company, which is still self-funded, charges $25 per month to use its platform. This includes access to the iOS and desktop apps, as well as its cloud platform (which lets users live stream to services like YouTube).