The Famous app got itself banned from Apple’s App Store about a month ago. They sidestepped the ban by promptly launching an Android version instead, and is today back on an iOS device near you in the form of a web app. 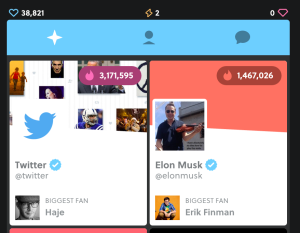 The Famous interface, in which your correspondent is the world’s biggest fan of Twitter. Which is true on several levels.

The App Store ban wasn’t the first brush the company had with disaster. Before its renaissance as Famous, the game was known as Stolen, and under that particular name, the company landed itself in a colossal cyclone of crap. The company shut down the app when it became clear that you could buy and comment on profiles of people who hadn’t consented to being used in such a manner, making it a high-risk zone for abuse, harassment and bullying.

For the new version, the company recycled much of the game mechanics, minus the commenting and chat functionality that made it prime bullying real estate, and re-launched as Famous, with a bit of help from game developer Zoe Quinn.

In its new incarnation, Famous is a fantastically addictive game that involves a surprising amount of strategy. As long as the company manages to keep the platform clean and free of spam and abuse, it’ll hopefully continue going strong. The web app is very well done, but who knows? Perhaps Apple will eventually change its mind about having banned Famous.