I’ve spent a lot of time over the past few days with the folks at Nike, who were showing off a whole bunch of new and upcoming products at their Innovation for Everybody event.

The big attention-getter was the HyperAdapt 1.0 — namely, self-tying shoes. Nike had already toyed with the idea of emulating Back To The Future Part II by announcing limited edition, self-lacing Nike Mags with star Michael J. Fox. HyperAdapt, however, is set to be the first mass-production shoe with these capabilities, and it’s scheduled for release during this coming holiday season. 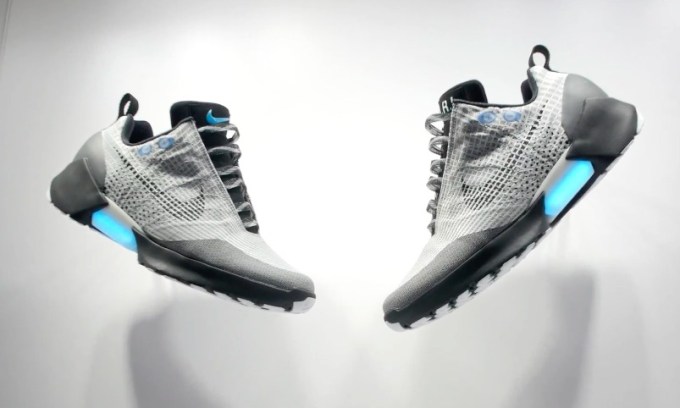 I got try on the shoes myself, at least for a few minutes. It’s fun but also surprisingly normal to feel them automatically tightening around your feet. (And the sound the laces made as they adjusted themselves made just as strong an impression.) They tightened just enough — they were pretty comfortable, so I only fiddled with the settings to see if I could.

Nike also showed off a new Nike+ app that’s meant serve as your main entry point to the Nike world — Nike’s Nikki Neuburger described it as “the all-access point to unlock your potential.” It includes a feed of personalized content, as well as the ability to shop, find nearby stores and connect with experts and other Nike services.