Late last week rumours began to spread that GoButler, the messaging­-based virtual assistant that let you request anything on-demand, was heading to the deadpool, with March 11th the alleged date. Well, that day came and went and the startup is very much alive.

However, as of today, it would be fair to say that GoButler is effectively re-booting, replacing the human-powered and open-ended feature of its virtual assistant with what is described as a “fully-automated service” — one that is based entirely on Natural Language Processing (NLP).

This will initially target flight search and discovery — one of the most common use-cases for the previous version of GoButler — and in future will expand to other verticals. In a statement, the New York-headquartered startup confirmed the change in strategy and new product:

“Starting on March 11, GoButler’s product will shift to a fully-automated service, rolling out our first category — flight search and discovery.

After taking this past year to collect data from our users on their wants and needs, this is an exciting crossroad for our company, as we move to position ourselves in the artificial intelligence (AI) and NLP space. As we work on perfecting our AI and natural language, we will be rolling out category by category, starting with the automation of flights. Though this means our original digital assistant service will no longer be available, this is an important step in creating a company with scalability and longevity. 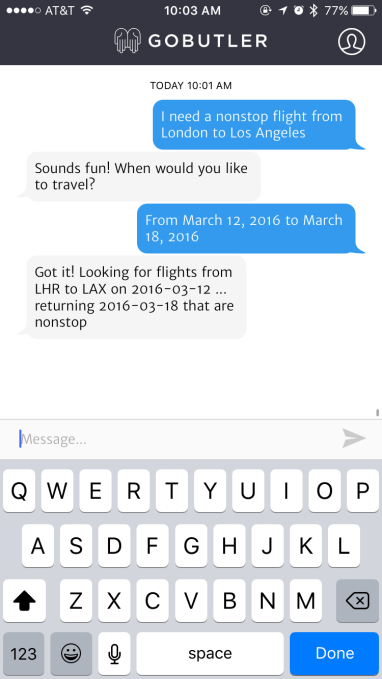 On the issue of “scalability,” it’s not hard to see how a service that retains the conversational messaging-based UI but does away with the human labour otherwise required to handle requests is potentially a lot more scalable. But it’s also a much harder technical nut to crack.

In a call, GoButler founder and CEO Navid Hadzaad conceded that the ability to scale was a major factor in GoButler’s decision to shift to a “fully-automated” version of the service, even though that initially means reducing its utility.

However, he also stressed that for many types of “commodity” requests, hinting that flight booking is one of them, human labour potentially introduces more mistakes than it eliminates and slows down the process — something that messaging-happy users don’t have much tolerance for.

In other words, an AI-driven but still message-based service has the ability to provide a better user experience for certain types of requests and verticals.

Hadzaad also points out that it’s only now that GoButler could make such a move, having garnered the conversation data needed to feed into and train its NLP engine. As a result, the flight booking and discovery ‘bot’ should be able to handle even the most severe edge cases, he says. That said, the newly booted GoButler comes with a ‘beta’ label and is purposefully being soft-launched today.

(Interestingly, in contrast to the NLP technology, the business model here is very simple. The flight booking and look up component is powered by Priceline’s API, and means that for every flight booked, GoButler gets a kick back in the form of affiliate revenue. That’s also a model that can easily be replicated for other verticals.)

Meanwhile, the GoButler CEO won’t say exactly how much runway the young company has left, but that there’s still plenty of cash in the bank after raising an $8 million Series A round led by General Catalyst Partners in July. Hadzaad also says investors are supportive of the shift in focus, pointing out that although he agonised over the decision it wasn’t one he took alone.

“I never wanted to build a services company, I want to build a technology company,” he says, noting that at Rocket Internet, where he co-founded the on-demand laundry app ZipJet, he experienced how hard it is to scale a service exposed to human mistakes. That’s something Silicon Valley underestimates, although Hadzaad refused to be drawn on how competitors still partly or wholly reliant on human labour, such as Magic, Operator, and Facebook’s M, will fare.

However, in a post to be published on LinkedIn, Hadzaad says that anyone who is trying to build a large business on top of a human layer will fail.

“There’s certainly a business to be built in the personal assistant/concierge space (i.e. “everyone’s AmEx Concierge”),” he writes. “However, looking at the small target market, in addition to the economics of these companies, it will be tough to build.”

“We know conversational commerce will change the way people will interact with businesses in the future, and our data has proven that the most efficient, fastest product will exist through total automation,” adds GoButler in a statement. “We’ve worked hard to get this point, and are excited to establish ourselves as a frontrunner in the conversational commerce space.”