Sustainability was a trend I picked up on this year as I met with several startups at SXSW 2016. One company that clearly falls into that category is Hotaru, which created a water-recycling portable shower.

The early-stage hardware startup, based in Tokyo, received an undisclosed amount of angel funding from Taizo Son. Their compact shower product works by using multiple water reservoirs to store and purify water. I spoke with CEO/co-founder Riki Kitagawa and co-founder Ryo Yamada; they claim their device can recover 95-98 percent of the water used in the shower.

The compact shower can be easily deployed in any area. It does require a power source, but Riki and Ryo told me that you can hook it up to a car for basic power to run it (unheated water). To power the water heater, a generator or AC hookup is needed.

Hotaru is focused on a concept they call “water freedom.” This freedom of being able to live anywhere — even in locations where plumbing or access to water treatment is not available — is achieved by personalizing  water treatment.

Obviously, outdoor living, military or travel uses come to mind for this concept (more showers on airplanes anyone?). However, when I contemplate the sheer waters savings that could be achieved, even in a residential setting, from a system like this, it seems pretty powerful.

Making sure the water remains purified is obviously a concern, and they are taking that challenge very seriously. The shower is outfitted with various sensors and alerts to maintain that level of purification.

The team was hilariously enough demonstrating the product on the trade-floor show by taking showers (with clothes on of course).

We were not able to discuss planned pricing or market availability at the time of publication. 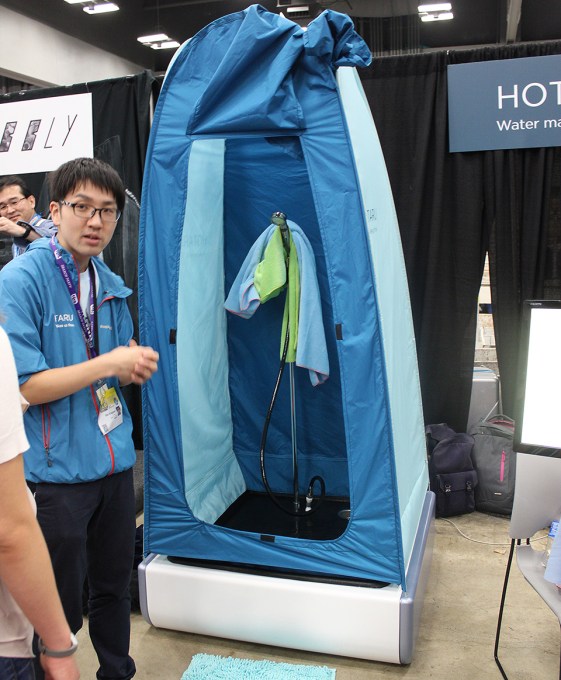