Disney Infinity producer John Vignocchi stopped by TechCrunch HQ to give us an early peek… and things got intense.

We here at TechCrunch tend to take everything a little too seriously, so the stakes were high. Namely, we were fighting for the Iron Belt — a finely crafted leather masterpiece that we promptly lost and replaced with a plastic dollar store wrestling belt with Iron Man crap glued to it.

I’ll save my full impressions for a proper review in a couple days, but at a glance, at least, Marvel Battlegrounds seems like a blast of a game… but one that comes with some big built in costs.

The pacing of the game is fast, but not quite to the newcomer-crushing degree found in other brawlers like Super Smash Brothers. The learning curve is certainly a bit less steep than Smash… though, at the level we were playing at, we were mostly just mashing buttons. It reminds me a bit of Power Stone, a 1999 Dreamcast game that I really, really loved.

As you take and give damage, you build up a charged attack that does massive damage to everything around your character. These seem like they’re going to be key: in each match we played, knowing when to fire off (and how to avoid) these attacks are what swung the game toward the eventual winners.

My only hold-up, and it’s not a tiny one: like all games in this toys-to-life category (where physical, real world figurines are used to unlock the in-game characters), this one seems like it could get expensive fast.

There are around 25 characters to chose from at launch, one of which (Captain America) comes with the set. Each figurine costs $10-15 bucks, depending on where you buy it. If you want to have every character at your disposal (and with a multiplayer fighting game, you generally do. More characters = more variety = more fun.) that’s over $300 you’re shelling out on figurines. Add that on top of the $35+ you’ll pay for the required Disney Infinity starter set and the $20 you pay for the Marvel Battlegrounds playset to begin with, and… well … it gets a little crazy. 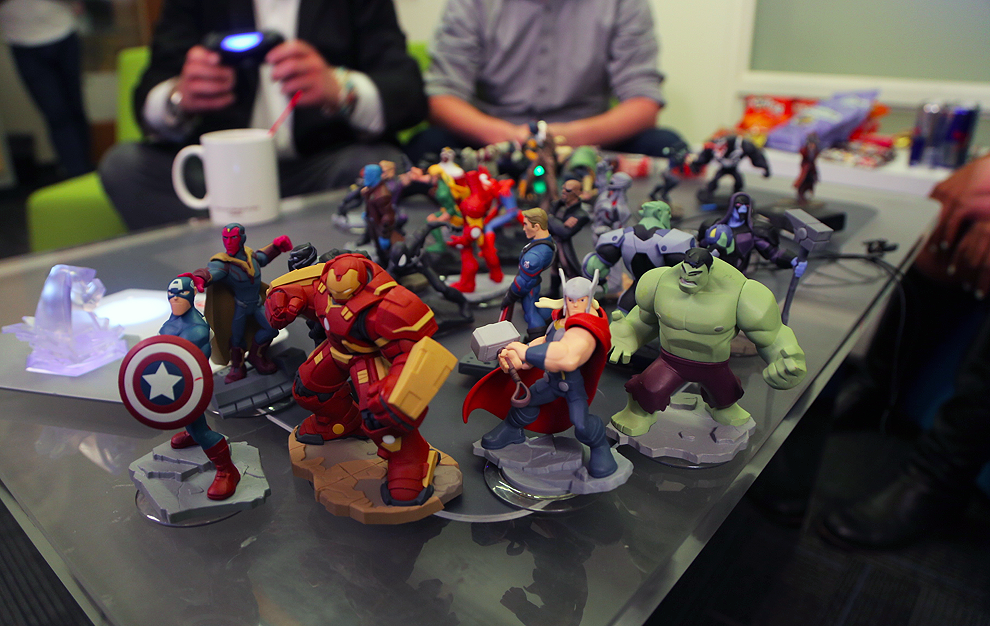 Stemming the craziness considerably is the concept of trial coins that you earn while just playing the game. Each trial coin can temporarily unlock any character on the roster until the next time the console is powered down, allowing you to give that character a spin — or to unlock a bunch of characters when your friends come over — without throwing down for the respective figures. Once the console turns off, though, they’re gone.

Meanwhile, Disney will also temporarily unlock a rotating handful of characters for one week at a time. That way, even folks with just one statue and no trial coins to spare will have enough characters available for a four-player match.

It also helps that older Disney Infinity 2.0 Marvel figurines work with this set, some of which existing Infinity fans probably already own. But, on that same note, some of these older figurines can be tough to find, thus making it tough to fully flesh out your roster.

All in all, the game seems like a blast; but is the inevitably-expensive toys-to-life category a good fit for a fighting game? Disney is being more generous than they have to be here with the trial character/coin system… but the completionist in me is already tempted to throw down piles of money just to have the full experience.