As our society moves away from the mass-produced times of yore, makers are helping to lead us toward a more unique, customized future. Bringing back local industry to cities helps build strong local economies and strengthens our workforce. The maker movement is encouraging entrepreneurs to share ideas, and the city is the central place where it lives, breathes, and succeeds.

Makers draw production back into the cities where consumption occurs, which can have profound economic and social benefits. In addition to added jobs, proximity means more innovation potential. As we become ever more focused on the uniqueness of place—and how technology can leverage what’s great about our environment to a broader array of the community—the maker movement delivers. The untapped skills and knowledge unleashed in a makerspace now have the potential to become part of the creative economy of the city as a whole.

Public investment in the maker movement is critical. City governments help ensure that not only does this effort continue and grow, but that there is a focus on jumpstarting the local economy through increased entrepreneurialism and building local businesses. In fact, we’ve uncovered a number of key ways cities can champion the maker movement:

Bring the Movement to Public Libraries

Libraries have always been a place to explore ideas through books, but with the advent of the maker movement, libraries are now places where ideas can be discovered through 3D printers, sewing machines, power tools, and laser cutters. The Chattanooga Public Library transformed the 4th floor of their previously rundown library into a 12,000-square-foot makerspace, which not only revamped the library but also largely contributed to the spread of the maker movement in the city. The 4th floor is an example of a win-win situation, where a public library experiences increased foot traffic, and local makers now have a place to work at an extremely low cost.

Place matters. The maker movement cannot exist without a physical space where people can design and prototype creations. Cities can help meet this need by donating unused buildings or funding infrastructure projects that house collaborative makerspaces.

In fact, the city of Eugene, Oregon recently sold an unused building for $1, which will be renovated and converted into a co-working space, incubator, and fabrication workshop. In Madison, Wisconsin, a $1.5 million investment by the city will expand a StartingBlock facility, where makers can learn to become entrepreneurs and local youth can access programs on electronics, art, sewing, metalwork, apps and gaming. 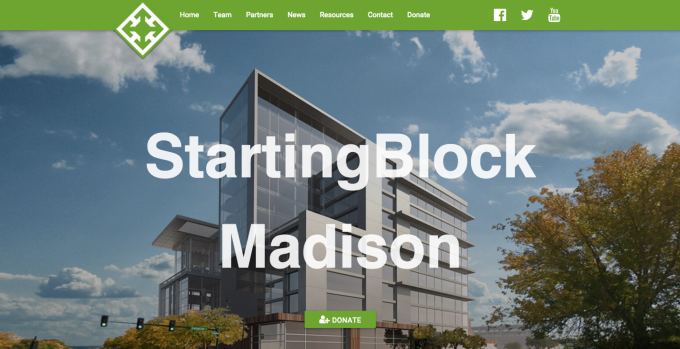 Children are the entrepreneurs of tomorrow. The science fairs and shop classes from past generations were earlier iterations of the makerspaces we see today. That’s why it makes perfect sense for the maker movement to be a critical part of K-12 curricula and programming.

Many makers in Burlington, Vermont, believe the essential pipeline for expanding the movement is through education for kindergarteners through high school. Children of all ages are encouraged to participate in “do-it-yourself-with-others” learning experiences that promote outside-the-box thought processes and analysis. To this end, the city’s libraries hosted maker workshops for K-12 students all last summer.

Cities play a key role in moving the maker movement forward. One of the critical outcomes of this investment and support are the numerous companies and partnerships that have been formed as a result of unleashing the creativity of makers. From the oft-repeated story of Square’s prototyping in a San Francisco makerspace to numerous examples across the country—these are the places where innovation is happening.

Maker-friendly cities are home to new enterprises, including companies that make everything from jewelry to drones to barstools to apps. Burlington’s makerspace is the birthplace of AirShark, a start-up company creating drones for industrial inspections and mapping uses. SnowShoe is the brainchild of doctoral students from the University of Wisconsin-Madison who leveraged the local makerspace to test out ideas, and ultimately create the SnowShoe Stamp. Every stamp, which will go into production later this year “connects physical objects with the digital world” to create specialized experiences on touch-screen devices.

Nationally, 26 percent of cities currently have makerspaces and 13 percent have hosted a Maker Faire. The diversity of what is happening is exciting and reflective of the uniqueness of place throughout the country, and cities are making it work in a variety of ways. The full spectrum is explored in our latest report, How Cities Can Grow the Maker Movement.

Cities are where makers are plying their trade, and it is in the urban arena where people, place and prosperity come together. Through active partnership and a clear policy focus on building this effort, cities can help makers transform the world into a more customized, local-first, and on-demand future. 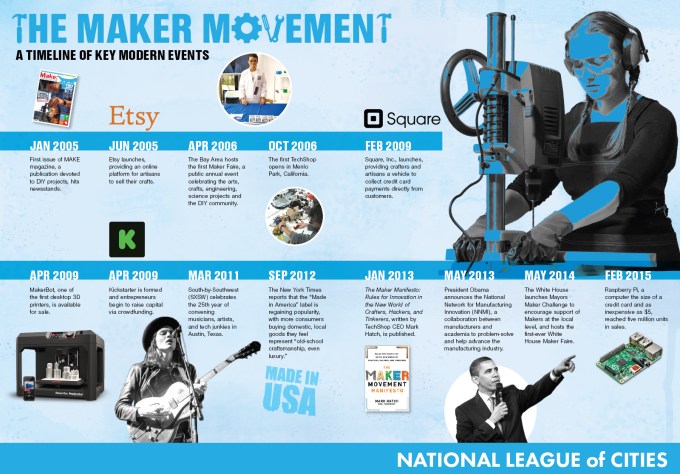