Today, NASA’s Jet Propulsion Laboratory released a new 360-degree video, giving you a virtual tour of the Martian surface. The video was created by stitching together images taken by the Mars Curiosity Rover on December 18th, 2015.

The scene takes place at Namib Dune with a view of Mount Sharp on the horizon. Curiosity’s Mast Camera took the images on the 1,197th sol (a Martian day) of its mission. A Martian day is about 40 minutes longer than an Earth day.

Open up the video in your phone’s YouTube app to view it best. By moving around your smartphone, you can get a high quality 360-degree look at Curiosity and its Martian surroundings.

The first version of this video was released on Facebook on January 30th, but because of the way the images were stitched together, the horizon was warped and the resultant 360-degree panoramic image was disorienting. Today’s 360-degree image was a huge improvement on the first and gives a cleaner virtual experience.

This isn’t the first time a 360-degree image has been created from Curiosity’s photographs. Back in 2012, NASA released a similar panoramic look from a Curiosity site. But now that Facebook and YouTube allow users to upload 360-degree videos, the public has an interactive way to see the red planet. 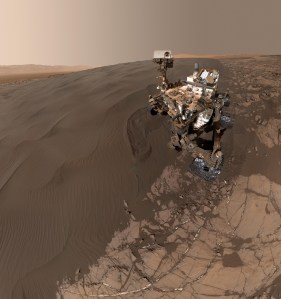 NASA’s also famously used another one of Curiosity’s cameras to create a “rover selfie.” The scene above was generated by combining 57 different images taken from Curiosity’s Mars Hand Lens Imager, located on its robotic arm, on January 19th, 2016.

In total, the Curiosity rover has 17 cameras, which are used for navigation, hazard avoidance and scientific analysis. 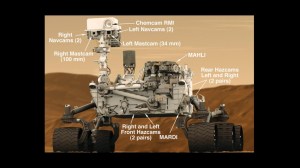 Curiosity, NASA’s largest Mars rover, landed on Mars with the help of a sky-crane on August 6th, 2012. The rover was designed to assess whether Mars has ever had an environment capable of supporting life.

Last spring, Curiosity discovered a unique rock formation in an area known as “Garden City” which suggests the existence of two distinctive wet periods in Mars’ history. Understanding the role of liquid water, a key ingredient for life as we know it, will help scientists determine if Mars currently supports, or has ever supported, life.

The nuclear powered rover also discovered rocks with very high amounts of silica in them. High-silica compositions are intriguing because they’re thought to be created from considerable water activity. Perhaps even more interesting, high silica deposits on Earth are often associated with places that support microbial life.

Curiosity’s science team is currently working on a couple different hypotheses to explain the rover’s discoveries and unravel the mystery of Mars’ past. Until then, the public can get a 360-degree look at the red planet we’ve yet to fully understand.