If you’re wondering about the seed-stage investment landscape in New York City, a new report from NextView Ventures could be a good place to start.

Pulling data from a number of sources (including AngelList, CrunchBase and Mattermark), NextView principal Tim Devane found that there were 175 seed-stage deals (defined as rounds of less than $4.5 million) in New York City last year, representing a total investment of $291 million. That represents 3 percent of all the venture money put into NYC companies in 2015, but 24 percent of all deals.

The report also breaks the investments down into four broad categories — consumer goods and services, food logistics, media and publishing, and financial technology.

On the consumer goods side, Devane said there was a “Warby Parker effect,” with “brand- and convenience-first consumer products” getting increasing funding over the past few years. In fact, he said investors have put $155 million into the sector’s seed deals since January 2014, compared to the lone $1.5 million round for Warby Parker back in 2011. 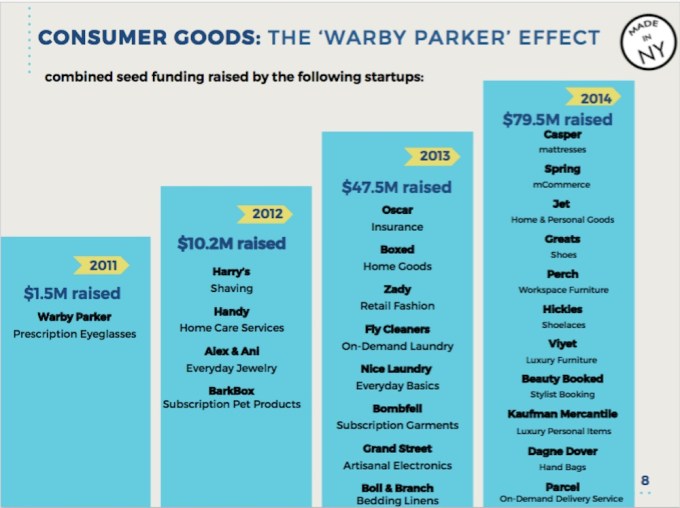 Similarly, funding for food logistics startups has taken off, though in this case the report’s numbers aren’t limited to seed deals — total venture investment went from $21 million in 2013 to $483 million in 2015. Devane didn’t seem to think this is entirely a good thing.

“The New York market can be a trap for food and meal delivery startups as the population density can create outsized order and revenue growth that is difficult to replicate in additional cities as the company expands,” he told me via email.

Devane, by the way, is based in New York City, even though NextView is headquartered in Boston. You can view his full report below.