It’s been a tough week for United Launch Alliance (ULA). A hearing last Wednesday brought news of a potential ban on Russian made RD-180 engines which ULA requires for their Atlas V rocket. To make matters worse, the U.S. Air Force is also considering ending an $800 million-per-year contract with the company.

This bad news actually works in favor for SpaceX, who is now certified to compete with ULA for high-budget military launches from the Air Force. In fact, SpaceX is the only other company capable of competing with ULA for these launch contracts.

Last Wednesday, the chairman of the Senate Armed Services Committee, Senator John McCain (R-Arizona) said that he was going to introduce legislation to reinstate a purchasing ban of Russian RD-180 rocket engines for military launches.

This is a problem for ULA whose Atlas V rocket, which they use for military launches, requires a single RD-180 engine. If McCain’s ban is approved, that would leave ULA with only 9 already-purchased RD-180 engines for Air Force launch contracts.

Congress originally cut ULA’s supply to RD-180 engines back in 2014 after Russia’s incursion into Ukraine. The ban was intended to reduce the United States’ reliance on Russia, especially when it came to military assets. 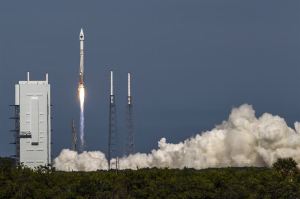 However, that ban was temporarily lifted in December when Congress enacted the 2016 omnibus appropriations bill. Senator Richard Shelby (R-Alabama) amended the bill to lift the RD-180 ban on ULA, whose rocket facility is located in Alabama.

In Wednesday’s hearing, McCain argued that the ban should be reinstated.

But the situation is complicated. The Air Force wants reliable access to space, but Congress doesn’t like companies giving money to the Russians in order to do that. Unfortunately, ULA doesn’t currently have another option.

This ban could also be seen as unfairly singling out ULA since NASA continues to pay hundreds of millions of dollars to Russia for rides to the International Space Station.

People are particularly angry about an event that happened late last year. In November, the Air Force opened up a competition for the 2018 launch of their GPS 3 mission.

At the time, the original purchasing ban on RD-180 engines was in effect and ULA declined to bid for the contract. ULA stated that, with the purchasing ban, they couldn’t guarantee an Atlas V rocket would be available when 2018 rolled around.

That Air Force contract is now expected to go to the only other viable option: SpaceX.

Some have suggested that this was a move by ULA to pressure the government into freeing up more RD-180 procurements. The reasoning behind this is that ULA has a longer and better track record for successful launches than SpaceX and it would be in the government’s best interest to maintain ULA as military launch provider.

For the past decade, ULA has enjoyed a monopoly on Air Force military launches. Because they were the only means to get military assets into space, the Air Force needed a way to ensure that ULA could maintain that capability at all times. Their answer was an $800 million annual “launch capability contract,” which was set to run through 2019.

When ULA opted not to bid in the Air Force’s November competition, some started to question the purpose of the $800 million capability contract. In fact, during Wednesday’s hearing, Air Force Secretary Deborah Lee James said that they were going to study the implications of ending the $800 million contract early. 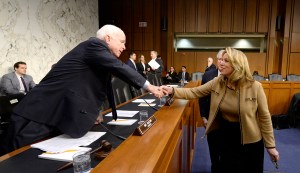 This contract was already a point of controversy after SpaceX received certification to join the military launch market back in May of 2015, ending ULA’s decade-long monopoly. The question was, if SpaceX can maintain the necessary launch capabilities without a nearly billion dollar contract, why should taxpayers continue to pay ULA $800 million each year?

Recent developments in Russia and the fact that ULA no longer holds a monopoly are the two factors that have turned the military launch market on its head. With two players now in the game, decade-long policies and contracts are getting called into question.

ULA has, however, taken steps to move away from the RD-180 engine. In September of 2014, the company partnered with Blue Origin to jointly develop a new U.S. made rocket engine. The engine is estimated to take 4 years to develop and be launch-ready in 2019.

But will that be soon enough?

Because of their pristine launch reliability record, ULA has always been an attractive launch provider for the Air Force. But today, ULA’s reliance on RD-180 engines has proven to be their greatest weakness, and SpaceX’s greatest asset.