Dropbox just released its diversity report for 2015 on the company’s blog, citing some progress around having more women in leadership positions, with 25 percent of the VPs at the company being women, but an overall decline in percentage of women. Last year, Dropbox was 33.9 percent women worldwide. This year, that percentage has dropped to 32 percent worldwide.

“And although we’ve seen improvement in the number of Blacks and Hispanics in the company, and in technical roles, their representation is starting from a very low base,” Dropbox CEO Drew Houston and Dropbox Global Head of Diversity Judith Michell Williams wrote on the company blog. “We know we have to do a lot better. Our goal is to continue to increase the number of women and underrepresented minority applicants in our pipeline and make sure we remove any biases in the hiring process.” 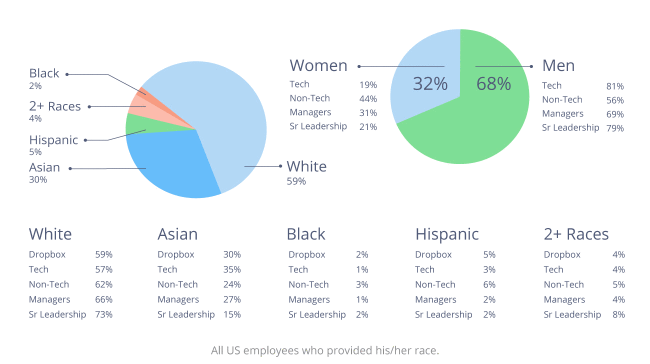