So about this time of year my inbox gets flooded with junk from Sundance. Reps, PR, invites to parties. Raise a chalice with Matt Damon and Stella Artois at Sundance! [Sure, why not]. Raise a glass with Canon [sense a trend?]. See the Extraordinary Difference Vaseline is Making [what?]. You get the picture.

But for the last couple of years, the big inbox trend for Sundance has been VR. In 2014, there was a small VR exhibit with a few crazy experiments. Last year, it got bigger with huge corporate sponsors as device makers entered the fray. This year, VR is an enormous chunk of the Sundance press in my inbox — drowning out all but the most aggressive foreign documentary stumpers. 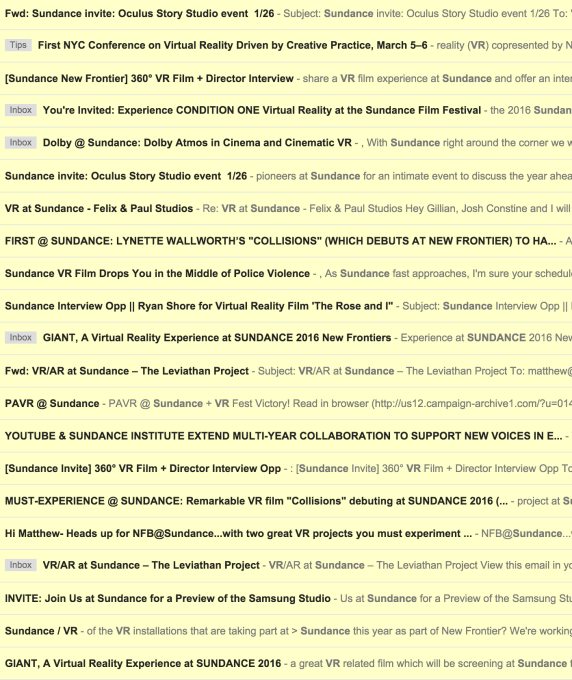 Frankly, many of the VR projects at Sundance this year have been out for weeks or months already, and have debuted in other venues. So standing out as a premiere will be difficult, because insiders will assume what you’ve brought is a road show to get people hyped about VR in general or your forward-thinking programming attitude. Which, fine, okay. But that doesn’t leave a whole lot for dedicated VR enthusiasts to look forward to at Sundance.

There are a few interesting things popping up. The Leviathan Project (pictured above) is a VR ride on a flying whale inhabited by bioengineered creatures (yes, please). There is the lithely titled Perspective; Chapter 2: The Misdemeanor, a VR experience that puts you in the center of police violence as a result of alleged petty theft (potentially powerful). And there is GIANT, a film that puts you in a physical room designed to simulate a basement, and then puts VR goggles on you and lets you experience a mother and father trying to comfort a child through make believe as bombs fall ever closer, closer, closer to your hiding spot (I’m sweating just thinking about it).

Anyhow, I’ll be at the show and will try to sample some things I haven’t tried, which is a legitimate reason for almost any company to be at a crossover event like Sundance. The base function of VR is very simple at the moment because it is truly a “you won’t get it until you try it” situation. You can go blue in the face explaining to someone what VR feels like or why it could be important, but they will never truly understand until they have a transportive experience in VR.

So the roadshow stage of VR’s life cycle has some legs yet. The vast majority of the world’s population has never even seen a VR rig in person, so that’s got to continue.

By next Sundance, however, I feel that this period will likely be on the wane. This will allow filmmakers to bring not just ‘experiences’ but full-fledged films and artistic endeavors to the field. For now, we’ve got one more cycle of “VR is a thing!” pieces to come from Sundance. After that we’ll be able to transition to: Is this a valid use of VR? Does it move the art forward? And, you know, is it good?