You might have noticed that Uber has started to pay attention to your habits. For example, the app often suggests my home address as a destination whenever I request a driver.

Google is today rolling out similar functionality across Google Maps for Android.

With Driving Mode, first spotted by Android Police, the app will offer addresses for home, work, or recently searched locations as potential destinations.. A bit like Google Now, Driving Mode is entirely proactive, showing a map with traffic statuses on nearby roads, and offering various routes to expected destinations. 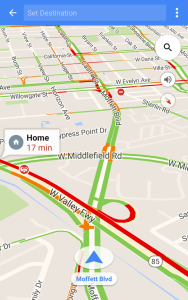 Of course, users can still input an address, but with each direct Google Maps inquiry, the user is giving the company more information to better predict the desired destination based on the day of the week, time of day, etc.

For example, if a user always goes to the gym after work on weekdays, Driving Mode will likely recognize that trend and offer traffic-based directions to the gym as soon as the user enters Driving Mode from the office parking lot.

Users can access Driving Mode within the Google Maps app, or add Driving Mode to their home screen as a short cut.

Over the past few decades, most software has predominantly focused on collecting data from the user based on a search query and a result. But after years of collecting data from users, Google and other tech companies are starting to be more and more proactive about the way they influence our lives.

Whether or not you have an explicit question, Google wants to have the answer.

Driving Mode for Google Maps on Android is just a small step in that larger shift, but it’s easy to see a pattern emerging with Google Now that will only continue to grow.