VLC, the popular video-playing software offering support for a wide range of media formats, is now available for Apple TV. For those with large video collections, that means you’ll be able to play your files on your TV’s big screen without having to convert them to a supported format. One of the more notable features in the new release is that the VLC app now supports “casting” through a “Remote Playback” feature. That is, you can send video files from a browser or app directly to the Apple TV, explains VideoLAN, the Paris-based organization that publishes the VLC software.

Plus, the VLC Apple TV app will be able to play files from Windows Shares, UPnP, FTP, and Plex servers, in addition to those available on the local machine. The app will actually automatically discover network storage and shares, then let you browse them using the clicker or the Remote, and choose the content you want to play.

Casting media is not quite as simple with VLC as with something like Google’s Chromecast, for example, but it will be one the app’s standout features.

Instead of just pushing a button, you’ll have to drag-and-drop one or more files into your web browser, opened to a page for the Apple TV. You can continue to add files to this interface to queue them for playback, until you reach your storage limit on the Apple TV – the files remain locally available on the device.

You’ll also be able to paste the URL for direct streams, as well as control playback, from the web interface VLC provides. Once playback ends for a network stream, the app will save the URL in a “Network Stream” view for easy access in the future. This section will also include URLs recently played back from the iPhone or iPad, too.

You can also paste in multiple URLs, to similarly queue them up for playback.

VideoLAN says the new version of the VLC software has been in development shortly after the debut of the fourth-gen Apple TV, which introduced an App Store. The software was released to beta testers in November, and is now being made available to the public – to find it, just do a search for “VLC” on the Apple TV’s App Store.

The software offers a number of features beyond playback of all file formats, including support for chapter navigation, multiple audio and subtitle tracks, and custom playback speed. That latter feature is something that no other video playback apps on the Apple TV currently offer, notes VideoLAN.

The ability to speed up playback is something that many use when consuming educational content, or watching talks, so it was a feature that the team felt was important to include from day one, they said. 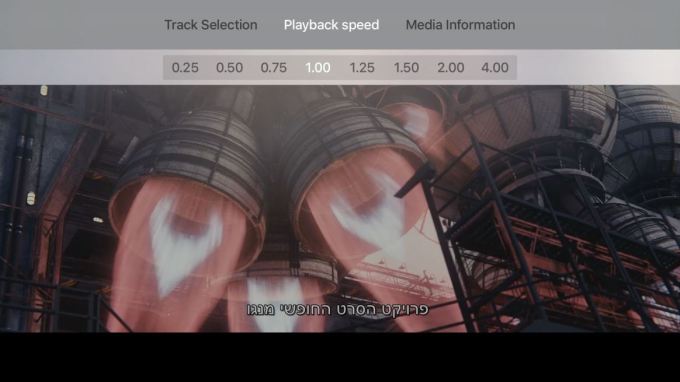 For the first time, VLC also integrates with OpenSubtitles.org, which will allow users to download missing subtitles during playback. Subtitles can also include right-to-left languages, like Arabic and Hebrew, as well as those requiring complex text layout, like a number of Asian languages.

In addition to video content, VLC’s app can be used for web radio and music, too, which is enhanced with lyrics and album art pulled from the web through an integration with the service hatchet.is.

While the VLC app is now live for all, VideoLAN is already planning a slew of features for an upcoming release, including integration with cloud services like Dropbox, Box, and OneDrive.

VLC has had a shaky history with the App Store in years past, having been booted for things like licensing issues, and other unknown reasons. Its debut on the Apple TV helps to set a precedent for how Apple will treat video playback applications like this on its Apple TV App Store going forward.