Cuvva, a burgeoning startup based in Scotland, is solving a problem that I didn’t know existed: the need to insure a car for as little as an hour.

Sure, one day or temporary car insurance has been around for yonks, but the Edinburgh-headquartered company think it’s spotted a gap in the market by offering hourly car insurance sold through its iOS mobile app — with typical users wanting to borrow or drive a friend’s or family member’s car at extremely short notice and only for a few hours.

“In the U.K. especially it is really difficult to borrow a car from a friend or family member at short notice because you need to arrange to be covered by the insurance policy the owner holds on the car,” Cuvva co-founder and CEO Freddy Macnamara tells me. “With Cuvva all you need to do once signed up is enter the licence plate of the car you want to drive and tap pay.” 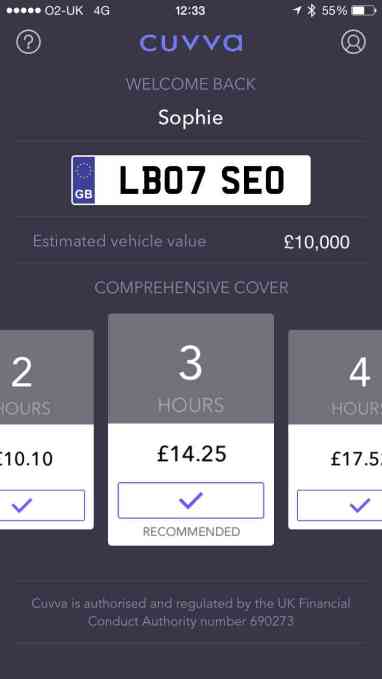 That sounds simple enough — and plays into the on-demand narrative currently dominant in the tech industry — but the sign up process, which is used to verify the person wishing to be insured is who they say they are and has a full driving license, is a little more involved.

Macnamara tells me you’re required to give the Cuvva app permission to query the DVLA (the U.K. driving license issuer) database on your behalf, which would flag up any potential problems, as well as upload a photo of your driving license and a selfie taken through the app. This way the startup can issue your insurance almost immediately.

It’s also possible — and means Cuvva can out execute legacy insurance companies built on older technology — because the DVLA has recently opened up its data in the form of an API, which the startup has been able to build on top of.

Competitors cited by Macnamara include several web-based providers of temporary motor insurance, such as Tempcover, DayInsure, and Sky Insurance, who are the current market incumbents.

“Due to its comparative flexibility Cuvva hourly can be viewed as competitive on price with these offerings, however its real utility is its ease of use – removing the cognitive overhead inherent in “just” borrowing a car in the same way that Uber has affected customer attitudes to getting a taxi,” he says.

Meanwhile, to help grow the business over the next 12 months, Cuvva has raised £400,000 in seed funding from an Edinburgh-based private angel syndicate.