The accelerator 500 Startups is eyeing an aggressive global expansion plan in 2016, with 10 new micro-funds planned worldwide, and as the investment firm plots its next course founder and managing director Dave McClure says that diversity in the fund and its portfolio are the top priorities.

McClure points to the geographic reach and multinational makeup of the existing team at 500 as indicative of the firm’s existing commitment to look beyond the typical profile for founders and investors in Silicon Valley.

“If you look at the roster of some of the more forward thinking VCs in the valley, they’re still very white and very male,” says McClure.

Although McClure is quick to point out that when the firm prioritizes diversity at portfolio companies and the firm itself, it’s not about promoting a social agenda.

“There’s not a strong moral thesis around what we’re doing. We’re managing other people’s money and we’re here to make a profit. It’s purely a greedy and selfish notion,” says McClure. “Women and minorities are undervalued assets. You could argue that we’re arbitraging racism and sexism globally for our own benefit.”

The 500 Startups collective of funds and micro-funds is definitely global. In fact, the sun never sets on 500’s operations.

With funds and portfolio companies in China, India, Africa, Latin America and the Middle East, the firm’s exposure to global trends is arguably unparalleled among accelerators, and that exposure to world markets gives the firm a different perspective on talent development and opportunity, according to McClure.

“I don’t think diversity for us is just about gender, sexuality, or color. One thing that’s a lot different for us… a pretty significant portion of our team were not born in the U.S.,” says McClure.

The big push recently, for 500 Startups and other firms looking to burnish their reputations in the Valley, and get more exposure to a broader pool of entrepreneurs has been around investing in more female entrepreneurs.

As the data shows, the firm has invested in over 400 female founders and over 300 companies with at least one-female co-founder (in over 200 of those companies the founder is also chief executive). The firm’s own staff is roughly 50% women, a rarity in Silicon Valley by any standard.

And recent events point to the success of the thesis. 500 was one of the first investors in Michelle Phan’s cosmetics company, Ipsy, which raised $100 million in September.

“The reason we invest in women and minorities so broadly is because we believe other investors are being foolish,” says McClure. “Even if the investment doesn’t work out, economically speaking, it’s pretty much a commercial for us day and night.”

Throughout his globe-trotting the 500 Startups founder has been adamant about recruiting women into the investment ranks at the firm. And even as he downplays his firm’s work, he acknowledges that the under-representation of women in the executive ranks of technology companies is problem that needs addressing globally.

“The problems are much more dramatic in other geographies,” says McClure. “It’s a global problem, and we’re pretty excited about what’s happening, but there’s a lot more to do.” 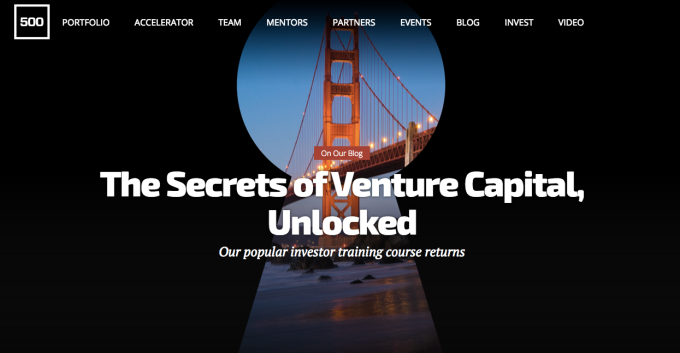 Looking for ways to extend its work, 500 is encouraging investors and would-be investors to diversify their own ranks and portfolios as part of its Venture Capital Unlocked: Secrets of Silicon Valley course. The firm is also putting its money where its mouth is with a new program that will offer $12,000 scholarships to up to 15 would-be students in the 42-person course.

The scholarships will be available to wannabe venture capitalists who have under $1 million in assets they’re looking to invest and who come from diverse racial, ethnic, and geographic backgrounds, according to the firm.

Training a new class of investors is vital to the health of the industry, according to managing partner Bedy Yang. “This is something that’s really important for the longterm,” she says.

By foregrounding diversity as part of the standard for the new program, 500 hopes to encourage a new breed of investor that is exposed to a broader range of experiences, she says. The students in the class (a partnership with Stanford University) are culled from a pool of impact investors, non-profits and small family offices, funds, funds-of-funds and angel investors, Yang says.

Beyond the firm’s push to address the diversity problems plaguing the investment community, 500 Startups also has big plans to shake up the venture model itself.

McClure has never been shy about criticizing venture investment for refusing to scale, but the firm is increasingly hoping to put its money where McClure’s mouth is.

The firm’s founder says he’s looking into building out an mergers and acquisitions shop inside 500 Startups — and that may be just the beginning.

“If we don’t end up being the biggest VC firm on the planet… If we’re not at 1,000 people in 10 years… Then I’m doing something wrong,” McClure says.

For him, the biggest hypocrisy in venture capital is the inability for firms that profess to be in the business of scaling businesses to actually scale their businesses.”

Ultimately, that could involve some sort of more liquid market for venture capital itself, says McClure.

“One of the challenges of being a VC fund is that most of them are 10-year illiquid vehicles, and it’s not a good option,” he says. “If you did have VC funds structured as trade-able entities, it would be better.”