Since the debut of the iPhone 6s and 6s Plus, which introduced support for a new, animated type of photo called Live Photos, a number of apps have launched to help iPhone owners do more with those moving images, including turning them into GIFs, save storage space by deleting the Live Photos and more. Now one of the first movers in this space, Lively, has rolled out a couple of notable features that extend what you can do with Live Photos. The app now allows you to trim your clips and even snag the best still frame from the video.

In case you missed it earlier, the app first debuted this fall, shortly after the release of the new iPhones, offering users a way to turn Live Photos into GIFs. Other apps offer a similar feature, like Live GIF, for example.

These apps are useful at present because Apple doesn’t yet support the ability to post your Live Photos to social media sites like Facebook and Twitter, or in instant messaging apps like Facebook Messenger. This is beginning to change, however, as Tumblr added support for Live Photos this month. For the time being though, if you want to share your Live Photos more broadly, you have to first convert them to GIFs – and that’s what Lively does. 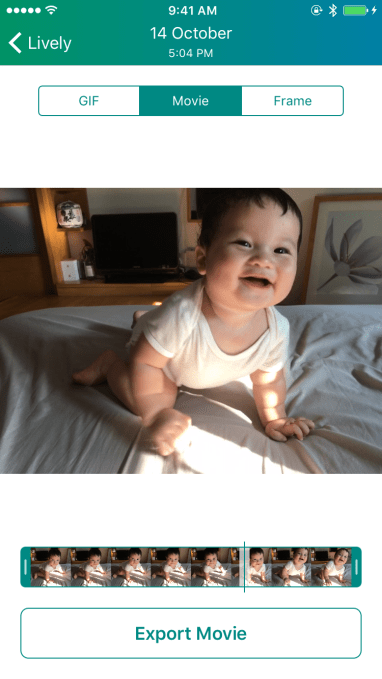 In the latest release, Lively has improved upon this process as it lets you trim the video part of your Live Photo before exporting it to a GIF. That means you can cut out the part where the iPhone has captured you lifting your phone or putting it down, which had been a particular annoyance up until the release of iOS 9.1 when iOS began to sense if a phone was raised or lowered so it would not record those moments. Still, there are older images that need trimming, and there are times when you just want to clip the video.

While the app developer, Jason Dinh of Tiny Whale, says that trimming is the most notable of the new features in Lively 2.0, I personally find that the ability to pick a frame from the video part of a Live Photo is actually the best of the new additions. This is particularly helpful when you’ve been trying to grab a shot of a wiggly kid or pet or some other action shot – often, the best photo wasn’t the still image that iOS captured, but one that can be extracted from the video section.

There are a couple of apps that let you pull stills from videos, like Vhoto (now shut down) and Stillshot (abandoned), but they don’t support Live Photos. That makes this feature a welcome addition.

Other improvements in the recent release include the ability to pull Live Photos from other albums besides the Camera Roll; GIF generation and playback optimization, support for better sharing, including posting directly to Twitter and Tumblr; localization; and accessibility support.

The app also supports the ability to make short, looping GIFs like Instagram’s Boomerang app, the developer also notes. The difference is that Boomerang requires you to use its app to record your shot, but Lively lets you make this edit after the fact.

A final tweak in the updated version is that Lively no longer asks you to purchase the app after three exports – going forward, you can use it for free indefinitely, and only pay if you want to remove the watermark that now appears on the photos.

Jason tells TechCrunch that in-app purchase rate was around 10 percent before, which was really good. “But that means 90% of the users couldn’t use the app at all after 3 exports. We would like those users to keep using the app, maybe it will work out in the long run,” he says.