I tend to shy away from trumpeting a startup’s metrics on their behalf or covering incremental app updates, but it has been a while since I heard from Musixmatch. The company originally pitched itself as an ‘IMDB for song lyrics’ and differentiates from a number of competing lyrics sites by being fully licensed and having the blessing of music publishers.

However, when founder and CEO Max Ciociola pitched me an array of Musixmatch news earlier this week, including newly added support for Spotify login and playback within the startup’s updated iOS and Android apps, one tidbit stood out: In terms of monthly users, the company has grown over 308 per cent in the last year, making 2015 a break out year for five year old Musixmatch and perhaps something that has been a long time coming.

More impressive still, this equates to 30 million monthly active users (MAUs), and 5 million daily active users (DAUs), while downloads across all platforms now total 50 million. That’s up from 10 million downloads at the turn of 2013 when the U.K./Italian startup raised its most recent funding round of $3.7 million, which brought total funding to $8.1 million. Musixmatch hasn’t raised any further funding since and says it has no immediate plan to do so. 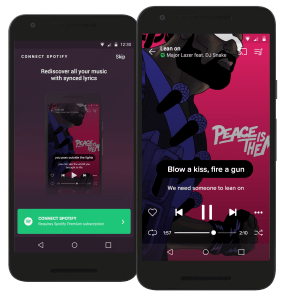 In a Q&A with Ciociola (a lightly edited version is published below), he attributes this recent traction to what he deems to be a number of “growth hacks”.

This has seen the company’s 30-strong engineering team find rather ingenious, albeit hacky, ways of getting Musixmatch’s lyrics to appear overlaid on and synced with third-party music apps, rather than forcing users to stay within the Musixmatch app itself and rely solely on their own local music library.

On iOS, for example, this involves using the notifications widget in order to display Musixmatch lyrics alongside Apple Music.

You seem to be on a significant growth spurt right now, having grown MAUs over 300 per cent in the last year. What is driving this growth?

It’s 100% organic. We don’t have a budget for acquiring users. Android is driving lots of traffic due to the nature of our Floating experience which lets lyrics pop up anytime you play anything from any music streaming service. We’ve made the same on iOS (although the nature of the OS is totally different) by Supporting Apple Music through the notification widget. It’s literally a growth hack and is getting users super engaged.

You’re announcing a new version of the Musixmatch mobile app with Spotify integration. This feels like an overdue move considering music downloads are being replaced by music streaming. What’s the thinking behind the new feature?

We started Musixmatch as a music player by letting users play their local tracks and enjoying them with Lyrics. That worked. But streaming and Spotify in particular are moving consumers from local music to music streaming. After we integrated lyrics into Spotify Desktop’s UI we’ve seen insane usage inside the desktop and we got tons of requests to add lyrics into mobile too.

Since Spotify built Spotify Connect we thought it would be great to offer this experience to connect your Spotify account inside Musixmatch and enjoy your playlists with lyrics. We’re bringing a new experience to streaming, less listening oriented and much more visually oriented because of lyrics.

Musixmatch is now 5 years old and in that time it feels like you’ve tried a number of products and ways to position the company, which originally pitched itself as an ‘IMDB for song lyrics’. What has worked and what hasn’t and can you share any lessons you’ve learned over the last 5 years?

We’ve tried to be a standalone app (for local music) by letting users play tracks inside Musixmatch vs using their native player because of the addition of lyrics. It worked but it didn’t scale. We’re now a separate layer on top of any music service: you play your music outside Musixmatch and we notify you of the lyrics in a beautiful UI or you connect your streaming service inside Musixmatch (as with Spotify) and enjoy your music in a new way. In this way we want to show the power of lyrics connected with any music service.

In the past, we tried to connect the lyrics experience with the singing experience (Musixmatch Mic) but that was a disaster (retail, latency, hardware, etc.). With Clip, we also tried to build a tool for letting people express themselves trough music and lyrics but we faced lots of copyright issues and we decided to take down Clip. We’ve learned a lot.

If I’m correct, you last raised a major funding round in early 2013 and total funding is just over $8 million in that time. Are you currently fundraising and do you feel that Musixmatch, as a European startup, is relatively underfunded compared to similar consumer startups in the U.S.?

We don’t really judge our company vs others by how much we’ve raised. There are companies in the same space that have raised $40 million and are not getting the same traction we are. We’re a group of 30 engineers fully focused on building an awesome experience and monetising it.

We’ve definitely changed the behaviour of people searching for lyrics on Google. They now have a place to enjoy lyrics with their music. And 1 billion people still search for lyrics on Google so this is a target for us. Look what happened during Adele’s new album release. Every time people search for music it is because of lyrics. We’re not fund-raising now, although this doesn’t exclude us doing so in the future. We’re focusing on revenues and growth.

Who do you see as your main competitors these days?

Rap Genius has done something pretty cool although mostly related to rap and annotating lyrics. Millennials want to listen to music with lyrics not annotate them. Annotating works for rap lyrics while not for any other genre. They’re mainly a web site playing the SEO game. They’re not as big as we are on mobile. But they’ve made something cool.

Sing by Smule is a fantastic app for Karaoke but Karaoke is not massive and it works only on Xmas.

We’re building a better music experience. Our users don’t use a headset and go running. They use their headset and watch the screen. That makes a lot of difference. It’s a watching experience. Not a listening one. Better than a video.

How do you make money and when might we expect Musixmatch to be profitable?

We license our data (lyrics and music vocabulary data) to companies interested in getting more data about music and what their users listen to. We say we’re the Music Vocabulary because we know what a song talks about. We can prove why Millenials listen to Taylor Swift and One Direction and not to Coldplay or Madonna.

It’s because the way these artists communicate with them. Lyrics are all about talking to fans and telling them a story. That’s why Eminem has a better Vocabulary than Bob Dylan (I swear I’m a big fan of Bob Dylan although my 13 year old daughter listens to Eminem!).

Making money as an app is hard. Users pay for gaming but not really for apps, and when I mean pay I mean paying my company’s bills. But there’s definitely a space for advertising as ads are becoming more native and our tests are showing that with a big audience you can monetise. That’s because users watch the screen when they use Musixmatch and that works for display ads. But we’re A/B testing continuously. 2017 is our goal for being profitable. We’re not so far and we know how to use the money we have.