Flipboard, the mobile and web app with some 82 million monthly active users who use the app to read content from around the web in a magazine-style layout, is today taking the wraps off a new version of its profile pages for publishers that includes new features like verified badges (a la Twitter), more monetization recirculation links (a la Taboola/Outbrain) and new ad tools. It’s an overhaul that should help those publishers sharpen up their presence in the app, but also help Flipboard make more ad revenue in the process.

The list of changes is not short, and is the result of months of work involving visits to many of the 400 top publishers who post to Flipboard today, said Jack Mazzeo, the company’s head of platform products. (Little side notes: Mazzeo — an alum of co-founder Mike McCue’s Tellme Networks — only joined Flipboard in May, perhaps with this overhaul in mind. Our sources had told us about some of these changes as they were being tested earlier this year under the name “Pipes”.) 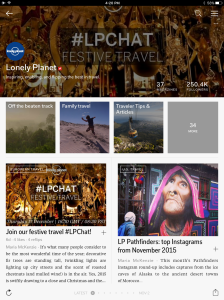 Some of the changes are being made to improve Flipboard’s usability. Following Twitter’s lead, Flipboard will now add “verified” badges to large publishers’ profiles, as well as the homepages of well-known individuals and brands.

This will be in the form of a red square with a white check. These badges will first start to be rolled out to the 400 top publisher partners, before Flipboard will turn its attention to the tens of thousands of smaller publishers and others creating content on its platform, the company says.

This is a sharpening of how Flipboard positions itself as a platform for marketing these different entities. “The whole purpose of is to make users understand [the verified account] is a real source,” said communications and marketing head Marci McCue, who says that, just as on Twitter, some of the biggest names have picked up people posing as them.

Flipboard will also (finally) give publishers a way of centralizing different feeds they may have for magazines on Flipboard into a single view. This is an important change, because in the past content was more siloed based on subjects as well as stories, news feeds and custom Flipboard Magazines.

Creating a single “homepage” was an important change to make because McCue says that publishers having been asking for more data about how their content is read on the site, and for more ways to grow that. This was one way to start improving both of those.

There are other features that Flipboard is adding in a bid to grow more traffic: perhaps top of the list is a new feature Flipboard is calling “End Cards.” These are essentially recirculation tools, which will feature a mix of other articles from the publisher in question, mixed in with links to ads as well as Flipboard’s take on native ads — sponsored articles. 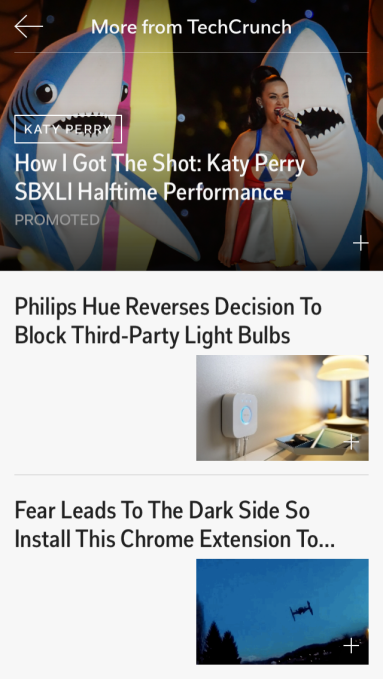 McCue notes that while End Cards (example from our own account, pictured right) will now automatically appear at the end of every story, and that there is no way of opting out of them, for readers technically it’s relatively easy to ignore these by not flipping the page at the end of a story.

However, I’m assuming that just as the Flip action is so sticky, it will be hard for people to avoid these. And Flipboard says that their tests of these have shown them to lead people to reading more: 15 percent of readers who have seen an End Card in its tests “continue on and open another story.”

Behind the scenes, Flipboard is also ramping up in the kinds of features that it’s giving to publishers to improve their analytics on the site, and how they advertise on it.

Publishers can now get unified numbers from comScore measuring their audience on the platform, and they can also get global views that will include Flipboard traffic alongside what they are seeing in their own apps and on the web. (Note: publishers will have to be subscribers of comScore’s Media Metrix service to get the full whack of data.)

“One of the things I heard from many publishers is that they wanted to represent the Flipboard audience in the same way that comScore represents audience,” Mazzeo said, and the same goes for Google Analytics, which Flipboard will now also integrate with to track traffic to their content from the Flipboard mobile apps.

The reason for pulling in and tracking more numbers? Advertising, of course: the numbers will help both Flipboard and publishers make the case to advertisers that this is a platform where they want to be.

Advertising is an area where Flipboard is also flipping the page: the company will now work with DoubleClick, via an integration with DoubleClick for Publishers (DFP), so that publishers can create and manage ad campaigns on Flipboard.

In the past, publishers would have had to use Flipboard’s own tools to do this, which would have been more time-consuming and potentially a gating factor to running ads at all. Now, the idea will be that publishers that are already using DoubleClick to create and track ads on the web and elsewhere will be able to add Flipboard into the mix relatively easily.

Flipboard would not say, however, what this might mean in terms of revenues: the company, McCue said, will continue to create and place ads on behalf of clients directly, and over time there may be more channels for ads created, such as direct links with larger ad agencies. All of these will result in different revenue splits for Flipboard, publishers, and any other party that happens to get involved.

Regardless of how it gets there, Flipboard has a pretty clear mandate right now: grow, grow, grow. The company raised $50 million earlier this year but at a flat valuation compared to its previous round. Others have noted that the company — once something of a startup darling for revolutionizing how content was read on mobile, in a beautiful and simple way — has been through several failed acquisition attempts and seen some of the initial hype peter out.

Flipboard’s fate hasn’t been helped by executive departures and the launch of several other services that directly compete with Flipboard. They include Apple News, but more importantly launches from places where people are already spending a lot of time online, like Facebook.