If on-demand is the future of delivery, a startup called Bringg aims to help established businesses better compete with the likes of Amazon and Uber going forward. The company has now raised $5 million in Series A funding to further develop its web and mobile platform that businesses to move into the on-demand era by providing features like real-time driver tracking, dispatching, alerting, mobile messaging, ETAs, and more.

Along with the Series A, Bringg has raised $7.5 million to date in outside investment.

Since its launch earlier this year, Tel Aviv and New York-based Bringg scaled its business to a few hundred customers in over 50 countries, including a number of markets outside the U.S. including parts of Europe, Asia and even Africa.

Founded in 2013 by Raanan Cohen (CEO), the former founder and CEO of MobileMax; and Lior Sion (CTO), previously the CTO of GetTaxi and Clarizen.com, the idea for the startup was to bring a Uber-like level of visibility to any delivery operation by offering the technology a business needs to add the features today’s consumers want – like the ability to be notified when a driver is on their way, get text-based alerts, track their delivery in progress, and more. 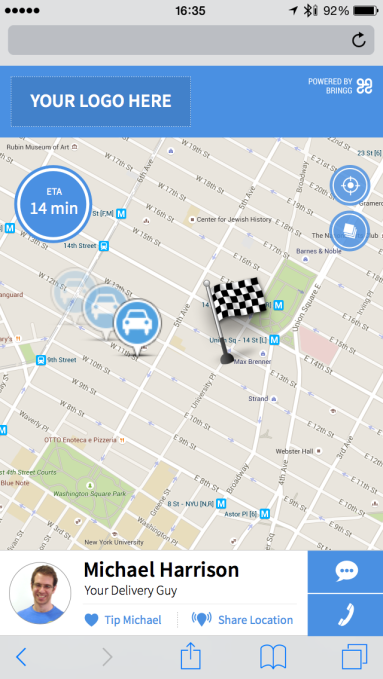 And on the business’s side of things, Bringg offers integration with existing systems, web and mobile dispatching, delivery tracking, as well as a driver application for communication with customers, signature collection, and other tasks.

Originally, the startup was signing up smaller companies, like food-delivery services Lish and Zuppler, for example. But it has found that the enterprise market – meaning businesses with more than 1,000 drivers already on staff –  holds more potential. This includes large retailers looking to compete with Amazon, service providers, and other home delivery businesses.

Says Sion, “these companies are not usually software businesses – they are retailers, or they are delivery companies.” These businesses are good at things like operations and marketing, but not necessarily technology and product, he explains. That’s what Bringg offers.

The co-founder says the company’s target audience is now bigger enterprises who already have existing delivery forces, but want to move more quickly in order to remain relevant.

“It was a little bit of a surprise that we were receiving more traction from bigger companies and enterprises,” admits Sion. “All the startups and big companies like Amazon and Uber are revolutionizing this business; the big enterprises are threatened by this revolution and disruption, but have no way to react,” he says.

“We help them with time to market. Instead of developing [on-demand infrastructure] themselves, they use us,” Sion adds.

Today, Bringg has nearly two dozen large enterprise customers, which is what prompted the Series A investment. Returning to the round was seed investor ITURAN, a fleet-management company, who has now been joined by a new U.S.-based strategic investor Bringg declined to disclose, along with a few unnamed individuals. (The new strategic investor is also a Bringg customer, notes Sion.)

The funding will be used to scale Bringg’s now 18-person team in the U.S. and Israel, expand development efforts, including adding new features like integration with mobile on-demand ordering systems, and to grow the company’s marketing and sales force to better target larger organizations.

Consumers may never recognize Bringg’s brand-name – it’s a white-label solution businesses customize and brand for themselves. But what this means is that we may soon see more companies beginning to offer things like real-time delivery tracking, the ability to see where a package is on a map, SMS alerts, tools to communicate with drivers, and more.