The Star Wars: Force Awakens train is a rollin’ and Google has gotten involved in a few different ways. One was by offering a special edition Google Cardboard in four Star Wars limited edition themes in Verizon stores on December 2nd. They were handed out to Verizon customers for free, but I was told that a lot of stores ran out.

Welp. If you want one, you can still get one. For free. Just order it through the Google Play store (US only). You don’t even have to pay for shipping.

In case you aren’t sure of what this thing is or does, Google Cardboard lets you drop your iPhone or Android phone into it and lets you view 360 degree videos and photos quite nicely. While it’s not “true VR” like what we see with Gear VR or eventually the Rift and Vive, you’ll enjoy the immersive experience you have. 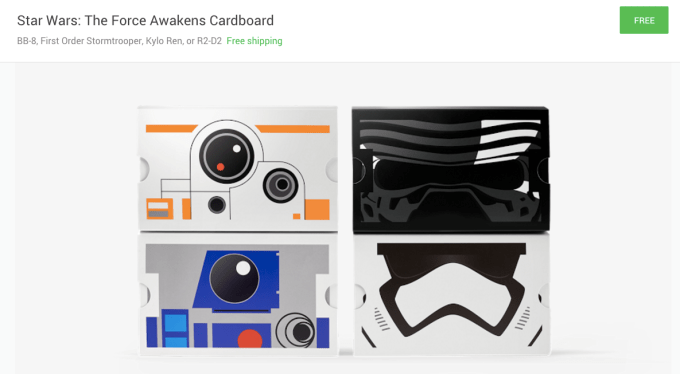 You can only order one, but if you get your friends or family to grab one, you can assemble the entire set of four which includes BB-8, First Order Stormtrooper, Kylo Ren, and R2-D2.

These are the droids you're looking for. @starwars Cardboard now available on @GoogleStore. https://t.co/skZOr0ZTyD pic.twitter.com/OKJqGWAAdX

Of course, once you check out, you’re reminded of all of the fun Star Wars things you can do with it:

That little infomercial is all you have to pay to get your Cardboard, so rock on and hurry up before they run out.