Yahoo is not going to spin off its 15% stake in e-commerce giant Alibaba,  target="_blank" href="http://www.cnbc.com/2015/12/08/yahoo-will-not-move-forward-with-alibaba-spinoff-sources.html">according to sources cited by CNBC. Instead, Yahoo is going to look into selling its core Internet business.

“If we see there is a strategic fit and it makes sense for our shareholders and we can return value, I mean we’ll look at it, but at this point it’s way too premature to talk about that one,” Shammo said at the UBS annual global media and communications conference.

Yahoo’s decision not to spin off Alibaba comes after a lot of uncertainty around whether or not Yahoo’s spinoff would be taxed. Despite those tax risks, Yahoo CEO Marissa Mayer said in June that the company would move forward with the spinoff of e-commerce giant Alibaba.

If Yahoo were to go forward with the spinoff, it would likely result in a nasty proxy fight with activist shareholder Starboard Value, which has been pushing for Yahoo to ditch its core business instead. Yahoo’s 15% stake in Alibaba is worth around $32 billion, while its core Internet business is worth anywhere between $3.4 billion and $4.1 billion, according to analysts.

Yahoo’s stock is up 2% in after hours trading. Yahoo has declined to comment. 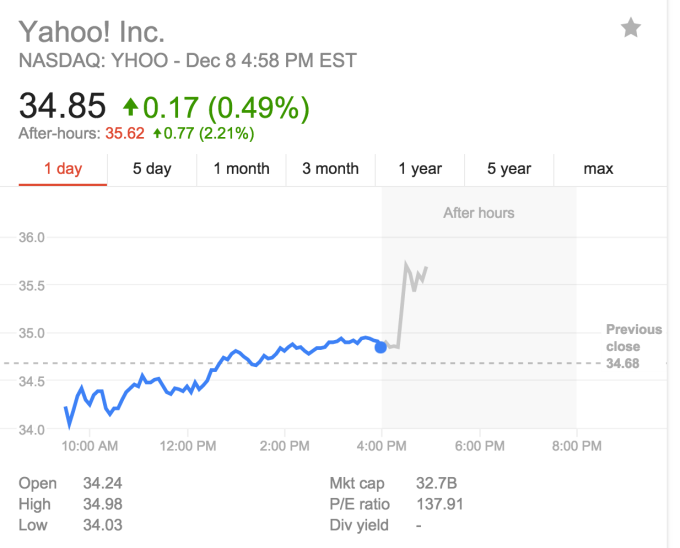