Making good on an announcement from this March, Starbucks and Postmates have now teamed up to launch a pilot program that will see the on-demand delivery startup powering deliveries for the Seattle-headquartered coffee chain. The service, which the companies had earlier promised would debut in the second half of 2015, allows consumers to place a coffee order via the Starbucks mobile app, pay using a credit card, Apple Pay or their Starbucks Card, then request delivery by providing their address.

The price for delivery is $5.99 and tips are expected, so the option is clearly being aimed at those placing larger food and drink orders – like those for meant for groups, such as office co-workers, for example.

The feature is only being tested for the time being in select Seattle area neighborhoods, including downtown Seattle, and nearby neighborhoods like South Lake Union, Capitol Hill, Madison Park and the Sodo area.

The ability to place an order for delivery is an expansion of Starbucks’ already successful Mobile Order & Pay feature, which became available nationwide this fall after a staged rollout that now allows customers in over 7,400 stores place orders in advance of their arrival using the Starbucks mobile application on iOS or Android.

As with the launch of the mobile ordering feature, delivery is also initially available only in the iOS version of the Starbucks application, the company says. 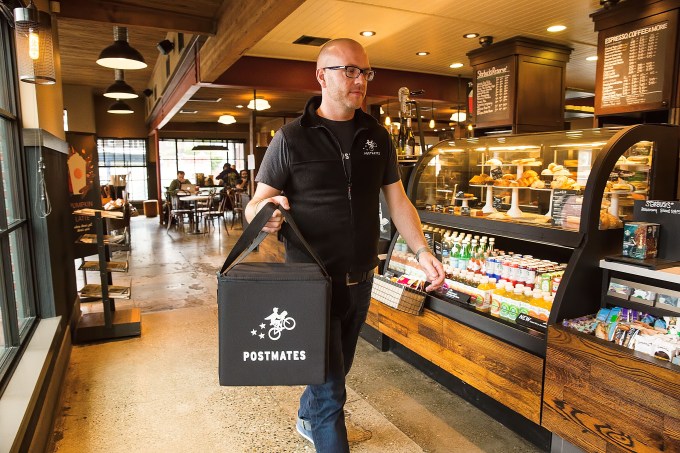 Starbucks today has over 16 million active users for its app, and the company has led the market in terms of payment and loyalty innovations, including mobile payments. Mobile payments account for 20 percent of all in-store transactions across the U.S., a company spokesperson noted this September, and Starbucks processes nearly nine million mobile transactions each week. That means it already has a customer base that’s poised to use mobile payments for both pickups and deliveries, without the need to educate the customer base or explain the benefits.

“Our customers are highly engaged with Mobile Order & Pay, placing five million transactions a month, so delivery becomes a natural extension that provides another easy and convenient way to meet them where they are in their day,” said Adam Brotman, Starbucks chief digital officer, in reference to the delivery service’s debut.

Originally positioned as alternative to waiting in line, Mobile Order & Pay lets you put in your order, choose your location, and pay before you even get to the store. But now, customers in select Seattle areas will be able to request delivery instead.

However, in this case, determining which store will provide your coffee is handled behind the scenes. Postmates is actually handling the logistics involved, the company explains, as Starbucks has implemented the Postmates’ API in the app. That means the app will send your food or drink order to store closest to your current location and dispatch the nearest Postmates courier to pick it up. Customers will also be able to track the progress of their delivery by watching the Postmates courier travel in real-time in a map within the application.

The goal is to have orders delivered under 30 minutes so food and drink items remain hot, says Postmates.

Though Starbucks is characterized this delivery service as a test, it seems likely the company will move forward with a larger rollout in the future after first learning from and reacting to customer feedback. In that case, a nationwide expansion would probably follow along the same lines that Mobile Order & Pay did – that is, a staged rollout instead of hitting all markets at once.

If that’s the case, it will be a huge win for the delivery service Postmates, which has already scored a number of high-profile deals with retailers and restaurants including Apple, Walgreens, Chipotle, and 7-Eleven.

This is not the first time Starbucks has made a foray into deliveries. The company launched its own delivery service in October, dubbed “Green Apron.” However, this pilot program for now is focused on delivering within large office buildings or other dense urban areas by way of a central kitchen, beginning with New York’s Empire State Building.