The Star Wars marketing blitz is on, with everything from trailers hitting the Internet to cans of food donning the likeness of characters at the supermarket.

People are flat out excited to see this new installment, Star Wars: The Force Awakens, on December 18th. To feed that excitement, the official Star Wars app (iOS / Android or search for “star wars official” on either store) has gotten a Google Cardboard-powered virtual reality experience called “Jakku Spy.” It was developed by Lucasfilm’s ILMxLAB studio along with Google and Verizon.

The premise is this: you’re on the desert world, Jakku, and you’re a Resistance secret agent. You’re in 360-degree immersive virtual reality and you experience the story in a series. New vignettes are available every few days. Naturally, the story will feed your appetite until the movie comes out on the 18th.

If you head over to a Verizon store today (and are a customer!), you can pick up a Star Wars-themed Google Cardboard to experience it yourself. It comes in BB-8, Kylo Ren, First Order stormtrooper, and R2-D2 flavors. 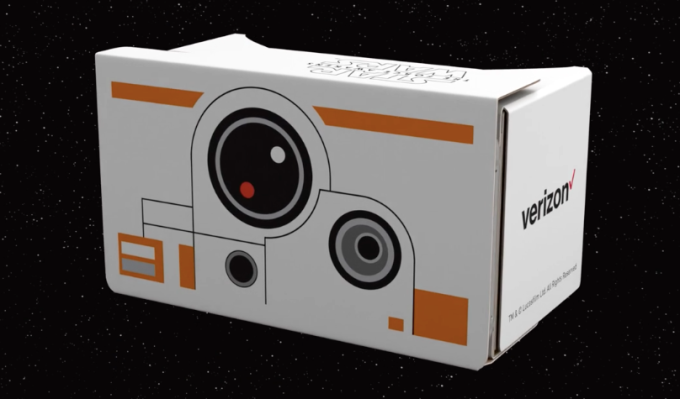 ILMxLAB’s whole foundation and mission is about creating immersive entertainment, and that includes virtual reality. We think a lot of people are going to get to experience virtual reality in Google Cardboard for the first time with Jakku Spy. It’s a great opportunity because there’s this familiar content — characters and vehicles that you’ve seen in trailers — but you’re seeing it in a completely new way.

That “new way” includes activity happening all around you. Sounds. Noises. The Lucasfilm group wanted you to feel like you had walked right into the next episode of Star Wars.

“When we pitched this idea, it was really about, ‘Can we not only tell people a story that’s legitimately connected to the film, but can we also make them feel like they’re in Star Wars?'” Bredow said.

Make sure that your Wi-Fi connection is strong, because downloading each “episode” will take a bit, as they’re pretty big files.

I won’t ruin it for you, but a certain droid delivers a message to you. Since the ILMxLAB worked with everyone who was involved with Star Wars, I’m assured that hardcore fans won’t be disappointed by the experience. “We’re actually working on them with the exact same people who are making the movie at the same time,” Bredow said of the VR-creation.

Star Wars in “first person” is something I’ve waited my entire life to try out…with the Disney ride the closest that I’ve ever gotten. Since “Jakku Spy” was created in concert with J.J. Abrams, checking it out is a no-brainer. For Google and Verizon, the tie-ins are a pretty genius way to get people to come into a physical store and take something with them that will change the way they think about seeing one of the most popular movie franchises of all time.

I hope that Lucasfilm’s ILMxLAB keeps playing around with VR as a platform. Can you imagine a future Star Wars being released in fully immersive 360 degree virtual reality? I could totally see it happening. Right now we’re in a hyper-hype phase of VR.

Every marketing person is wondering how to take a bite out of it for an extra eyeball or two, and brands are salivating at getting even 30 seconds of immersive content. Virtual reality is nothing new, so the industry and medium will indeed weather this storm of noise and come out on the other side more relevant and better for consumers.