Gabriel Wilmoth Contributor
Gabriel Wilmoth is an investment manager at Syngenta Ventures and has spent more than a decade helping farmers and ag innovators become more profitable and more sustainable.

With interest and investment in food and agriculture startups reaching record levels, new entrepreneurs are entering this important sector, bringing fresh ideas and perspectives on how best to feed the world.

While numerous opportunities exist to make a difference in this space, I’ve noticed some common pitfalls for new entrants. In the last decade, I have collected lessons to help new ag innovators boost their chances of raising venture capital and successfully bring their innovations to market.

To illustrate, imagine a team discovers a product that boosts corn yields by 3 percent, or even 5 percent. What are the chances for the startup to commercialize this innovation? Odds are low, because 3 percent is probably not enough change to influence growers’ behavior. Most people can’t distinguish a 3 percent yield difference in the field — it falls within the range of normal variation.

In fact, one of the big, inherent challenges in the sector is that a farm field is such a complex environment — with interactions occurring across the soil and climate, biological factors and agronomic operations — it’s frustratingly difficult to know if a product is actually working.

In contrast, think about some of the classic ag innovations in the past century, like hybrid corn or Norman Borlaug’s wheat varieties, which launched the Green Revolution. How big were those yield improvements? More than 2x and 3x, respectively. That size impact can change the world — or create the foundations for great companies.

This point doesn’t trivialize incremental improvements, especially since those 2x yield improvements are rare, perhaps once-in-a-generation discoveries. Instead, the point to remember for ag startups seeking venture capital is the impact needs to be big enough to get growers’ attention and to create enough value to share across the full value chain.

Each agriculture system represents a different combination of markets, environment, land, labor, capital and other inputs. Ag innovators must appreciate which of these factors represent constraints for their customers.

Consider the current interest in vertical farming and indoor controlled-environment production. News articles and company pitches in this area typically include some variation of the following claim: “Vertical/indoor farming is more sustainable because it uses 90 percent less land, less water and less fertilizer, and leads to less waste because production is closer to the customer.” This sounds good, and certainly meets the threshold for big impact.

However, a 10x improvement doesn’t mean a controlled-environment startup has a viable business. The improvements must apply to variables that drive the business model. A key challenge for vertical and indoor farming concepts remains the high-capital investment required, which can exceed $500,000 per acre, or 10x more than field-grown. As much as we urgently need agricultural systems that use less land, water and nutrients, most businesses find it difficult to sustain a high-capital cost model through sales of a low-margin, commodity product.

To continue the prior example, consider an indoor farm startup in an ideal urban location, with a long winter and a carefully dialed business model for production and marketing of lettuce and herbs, like the models successfully pioneered by Gotham Greens, AeroFarms or BrightFarms. The achievements of these teams should be celebrated! However, lettuce and herbs represent less than 1 percent of U.S. agriculture production — on either a land area or dollar basis, according to USDA data.

A challenge for ag entrepreneurs — especially those motivated by social and environmental passions — is to apply innovations to broad-acre crops, like corn, wheat, beans, rice and potatoes (or to rangelands), which currently make up a predominant share of global diets and land use.

Chef and food advocate Dan Barber articulated this challenge to the sustainable ag community in his book The Third Plate, when he argued, “If we want to improve the condition of our food system…focusing only on fruits and vegetables is like planning a new house but designing only the doors and windows. It misses the big picture.” 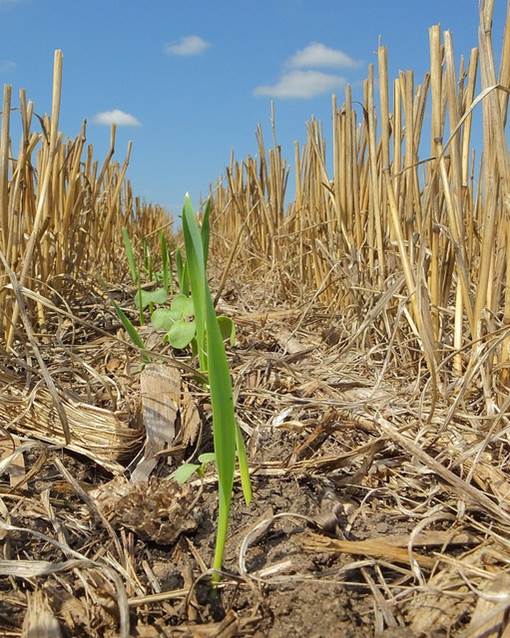 One emerging area of investor interest with the potential to impact broad-acre production lies in the category of “alternative proteins,” which may be plant-derived or even insect-derived, and includes companies like Beyond Meat or Kite Hill. In contrast to lettuce, meat and protein occupy the center of America’s dinner plate, and a large share of America’s farmland.

While there are plenty of business obstacles for alternative protein startups to overcome — top among them being consumer food preferences — it’s foreseeable how some of these emerging companies could earn a place on the plate.

Finally, there’s another reason for ag entrepreneurs to focus on broad acre: market size. While solid arguments exist for initially targeting a niche market of highly motivated customers, much larger markets exist for innovations that can apply across multiple, broad-acre crops and in multiple production environments.

Ag entrepreneurs sometimes mistake a good innovation for a good business. Here’s a historical example. Imagine an ancient discovery that routinely produces 7-10 percent yield gains, works on most crops, costs only a few dollars per acre and is currently experiencing exponential growth in demand. Could this innovation be a good business opportunity?

The discovery I’m referring to is the use of cover crops, which involves planting a secondary crop for the purpose of protecting the soil. As early as 400 BC, the Greek historian Xenophon claimed leguminous cover crops “being turned in to the earth, enrich the soil as much as dung.”

While the innovation offers many benefits for farmers and the environment, ag entrepreneurs should recognize a potential hurdle: It’s hard to translate the innovation into a business model, or to maintain adequate margins when there are limited barriers to entry. Any grower or competitor can access an alternative either by saving their own seed or purchasing a competing, even generic, cover crop variety.

Margins will remain low and limit the ability for an innovator to recoup any investments in R&D or marketing. While there are plant variety protections and examples of savvy teams pursuing cover crop-based innovations, like the teams at Arvegenix or RowBot, the example of cover crops shows how some innovations create value for growers, but are challenging to craft into viable business models.

Ag pitches commonly show a demo of two plants or two fields side by side: one bigger, one smaller, with the difference implied as the result of some new innovation. Such pictures can offer validation, but they also can be highly suspect. Besides the challenges mentioned on seeing a difference in the field, companies sometimes rely on trial results that weren’t fair comparisons…or weren’t representative of best practices. This creates conditions for confirmation bias. Sometimes the “no treatment” control practically punishes the plant.

A more informative trial would compare the new treatment alongside the best-in-class protocol a grower would use. It’s more capital-efficient to do representative trials early — even if that means killing off a lead — rather than devote resources to a minor effect that appeared because the trial environment wasn’t rigorous. When ag entrepreneurs make bold claims based on a small number of trials in artificial conditions, it frequently proves more expensive for them, and their investors, in the long run.

How many trials will it take to know if the innovation works in the field? Typically three years, from dozens of locations, with multiple reps per plot. Because yield is a complex outcome, the repeated trialing helps establish a probability function, using past relative performance to predict future relative performance. Along the way, innovators gain understanding of how and where their innovation could fit in the landscape.

Creative teams can hunt for models to get more insight faster and from fewer trials, or develop ways like Farmers Business Network to crunch data from the whole corn belt as one big trial. For most teams, the best advice is to engage a statistician or expert in trialing early to help define what level of trials will be required for valid insights.

I have a pet peeve when it comes to competitive analysis. Put simply: Most teams don’t spend enough time understanding their competition and crafting a compelling strategy to win against that landscape. That sounds like pretty basic advice, but there’s a reason it matters in ag markets more than most.

Low-margin, commodity businesses characterize large portions of the agriculture industry. Partly as a result, the default choice for ag customers is often to do nothing. For the innovator trying to disrupt this market, Clay Christensen would call it “competing against non-consumption.” Keep in mind, a farmers’ “do nothing” choice isn’t out of laziness or ignorance.

For whatever new solution is being proposed, how are farmers solving the problem today?

It is often a rational choice: They have survived without the new innovation. If it is not adding to the bottom line today, then they don’t need it, especially in the current environment of low commodity prices. The most profitable farms I know got that way by not wasting money.

The lesson for entrepreneurs is to understand for whatever new solution is being proposed, how are farmers solving the problem today? What competing alternatives do they have? Then, thoroughly analyze how to create a better offer versus that competitive landscape.

Recently, it is distressingly hard to find an ag news article that doesn’t include some version of the statement: “The world will soon have 9 billion people, therefore we must increase food production.”  Although such predictions may prove true, ag entrepreneurs should avoid dwelling on them because they are already widely recognized and accepted.

A business case resting on the same logic that everyone else accepts risks not digging deep enough for unique insights or advantages. In the spirit of Peter Thiel, I am much more interested in what everyone is not saying or why the conventional answer may be wrong.

Take these three insights from current venture-backed ag startups. In each case, the team’s analysis led to a unique, even controversial, point of view that they developed into a differentiated strategy:

Now, use these lessons and start digging for your own unique insight into how best to feed the world.

The views here are the author’s and not an endorsement or position from Syngenta AG.