The future of wearables could be inked on your skin. Chaotic Moon, a software design and development firm based in Austin, Texas, is developing a high-tech tattoo made of components and conductive paint to create circuitry to basically turn you into a cyborg…er collect health and other biometric data from your body.

Chaotic Moon’s tattoo kit is in the nascent prototype stage right now, but CEO Ben Lamm told me it will be able to collect and upload health and informational data, much like Jawbone or the Apple Watch and send it to medical staff – or maybe even the military.

“This is the new wearable,” Lamm told TechCrunch. “The future of wearables is biowearables.”

“This is not something that can be easily removed like a Fitbit. It can be underneath a flack jacket, directly on the skin to be collecting this data and being reported back,” Lamm said of military applications.

The tattoo is temporary and washes off much like a temporary fashion tattoo. According to Chaotic Moon, the tatt will have the ability to monitor body temperature and detect if someone is stressed based on sweat, heart rate and hydration level information uploaded via Bluetooth or location-based low-frequency mesh networks like those used for apps like Jott or Firechat.

Chaotic Moon is best known for fire-breathing drones and bitcoin earning fitness trackers, but Lamm said the tattoo project was one of the most exciting his studio has ever worked on.

He also mentioned using the tattoos for location-tracking during concerts or for keeping track of your kid at an amusement park. 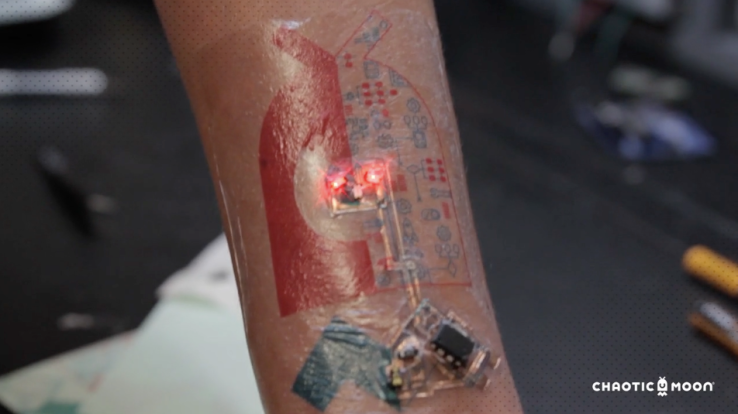 Some of the attraction for military use could include the tech tatts potentially detecting poisons in the air, pathogens in a soldier’s body, or identifying when they are hurt or stressed.

“It’s an eco-friendly, non-invasive use of a platform that basically turns you into a human circuit board.”

Biometric tatts are promising, but not original. Cyberpunks, or grinders as they are sometimes called, form a strange and fascinating subculture of folks who like to manipulate their bodies with technological implants.

While much of the grinder culture centers on cutting themselves open and surgically installing magnets, RFID chips, and other components for biohacking purposes, there’s been some small rumblings on the subject of biometric tattoos.

Tim Cannon, who heads Grindhouse Wetware, a startup implanting open source RFID chips inside the human body to do things like open your front door or turn on your car, said he’s familiar with the concept.

“Yeah, I have seen some stick on NFC stuff,” Cannon told me in an exchange over Facebook about the idea. He’s heard of a few smaller outfits working on biometric tattoo technology, but not anything serious just yet. He also mentioned attempts to create a more permanent biometric tattoo for constant monitoring and tracking, but that the ink wasn’t deemed safe to do that with humans for now.

While permanent tracker ink no doubt poses its own set of issues, the opportunity to track humans on even a temporary basis, presumably comes with the possibility of new privacy and medical regulations as well. Chaotic Moon is just creating the product and will leave all that up to whoever buys or implements the technology, according to Lamm.

“At the end of the day, there’s all sorts of firms out there like cell phone companies and drug companies and medical device companies that work through those processes,” he told TechCrunch. “For us, we’re trying to start a conversation around ‘hey you’ve already had these types of data collection components on your body.’ A lot of times they are big, they are bulky and they can be limiting. Now we’re looking at changing and evolving with these other types of conductive ink.”

And to that point, there are already plenty of devices out there one could put on their body to monitor activity and upload biometric data. The U.S. government has reportedly explored the grinder path with permanent implantations in a collaboration project with DARPA.

Lamm believes temporary is the better route to data collection. The tattoo kits would presumably be cheaper, less invasive than cutting soldiers open, and less annoying than wearables today as people could stick them on and go about their day instead of needing to remember to charge something and put it on.

Lamm couldn’t name names, but he did say Chaotic Moon was already in talks with a few strategic partners to take this concept to market.

“We’re looking at this as a human circuit board and the human body as a platform that we can build on top of,” Lamm said.

He also mentioned that while the tech tats are just a prototype for now, the focus at his studio is on the next wave of tech for clients. Lamon was hopeful on the prospects of a third-party partner to bring these tats to market soon.