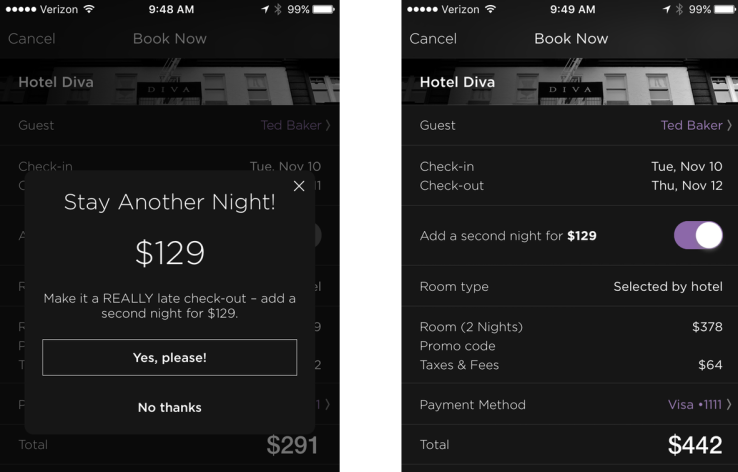 Here’s how it works: When available, Tonight +1 will automatically appear during checkout, prompting users to add an extra night to their stay.

While the new feature will definitely benefit customers who want an extra day of vacation or need a super late checkout, it will also empower hotels to tempt guests to commit to a second night earlier than they normally would.

For example, the company said that one-third of their repeat bookings come from the same customer in the same city for the next night, meaning that there is presumably a large portion of customers who switch hotels between single-night stays.

By offering an additional discount via Tonight +1, hotels can now lock in guests who may have otherwise booked a different hotel for their second night.

Notably, this feature is only available during checkout – meaning the company won’t prompt users to add an extra night while they are in the middle of their stay. However, when asked, HotelTonight said that offering Tonight +1 at alternative times during a guest’s stay is something they will consider in the future.

This new feature comes just a week after the company cut 20 percent of its workforce. However, Sam Shank, founder and CEO of HotelTonight, said that it wouldn’t change the company’s overall direction, and was primarily a “strategic movement that will enable us to reach our growth and revenue targets.”