Tumblr today is launching a new tool that will capitalize on its community’s love for both creating and sharing GIFs with the debut of a mobile-only “GIF Maker.” The tool, which lets you quickly turn your iPhone videos or burst photos into GIFs, will not be a standalone application, but will rather become a core feature of the main Tumblr mobile app.

“Tumblr is the home of the GIF and we’ve been working on GIFs for a really long time, with GIF curation, GIF search, and our Tumblr TV initiative,” explains Tumblr engineering lead Kevin Grant, who also led project management on the new GIF Maker feature. “And something we’ve really been excited about for a long time is to actually create them.”

It may seem like Tumblr is somewhat late getting into the GIF creation space, given the rise of competing GIF-making apps like those from Giphy, DSCO from VSCO, or Giffiti, for example. But according to the company, it’s only been recently that our mobile devices have gained the processing power to make the process of easily converting burst photos and videos to the GIF format possible, as well as simple enough for anyone to manage with just a few taps.

In tests, using the GIF Maker is as easy as Tumblr describes it to be.

To access the new feature, you first tap the “Compose” button in the Tumblr application, and then choose to create a new “Photo” post. Here, you’ll see an option to filter your Camera Roll images by “GIFs” at the bottom of the screen.

“So many of the photos you create on your iPhone today are ready to be GIF’ed,” explains Tumblr founder David Karp.

Tumblr’s app actually scans your phone for those burst photos and videos it’s able to convert, Karp explains, and displays them on this screen with a “GIF” label attached.

“It will just be this constant reminder for all those creators on Tumblr who are posting their photos every day through the app that this is something they can do,” he says.

The GIF Maker also lets you trim your clips, or choose whether they loop or rebound, meaning to play the frame again in reverse. And you can speed up or slow down the speed of the clip itself as well, before posting.

The fact that the GIF Maker taps into your Camera Roll for GIF-able content means we could be seeing a lot more “personal” or artistic GIFs rolling out on Tumblr, which is better known for more meme-heavy or media-focused GIF content, like GIFs from favorite cartoons, TV shows or movies.

But GIF Maker doesn’t necessarily have to be limited to only those images or videos you shot yourself. There are a number of ways to download third-party video content to your Camera Roll, which could expand the types of video you could turn into GIFs with far less effort than having to turn to complicated desktop software.

The GIFs you create using the new feature will also be automatically tagged with “GIF” and “Made With Tumblr,” to help them be accessible via Tumblr search or better discovered on users’ own blogs.

A Mobile-Only Tool For Tumblr’s Social Network Of Creators

Though at first glance, the addition of a GIF creation tool seems to be little more than a minor feature addition, for Tumblr, whose growing creator community as something that differentiates it from other social networks, the release is notable. While the rest of the web that grew up around Tumblr made it possible to do things like post high-res photos or publish videos, Tumblr carved out its niche as a place users could call their own, the company believes.

“The promise of Tumblr is that we would be the space where creators could really put their full range of expression there, and it was customizable – not a vanilla white Flickr profile, or Facebook profile – you could design something and make it yours,” says Karp.

Above: GIF via Lydia White

But figuring out where Tumblr fits in today as users spend increasing amounts of time on leading social networks, like Facebook, or in messaging apps like Messenger or WhatsApp, is something that Tumblr now needs to sort out. Does it also want to be a social network of sorts? A communications platform? A home to creators? A community based on interests? All of the above?

The network just launched its own version of messaging just last week, for example, which puts it more in the crosshairs of rival social platforms.

What’s interesting about Tumblr’s messaging service is that it doesn’t only connect real-world friends, but also strangers who are talking to each other because of a shared interest. Similarly, launching this GIF Maker tool is about catering to Tumblr’s unique audience of creatives who post, reblog, as well as like and comment on content they find not because they know each other, but because they’re all into the same sort of things. 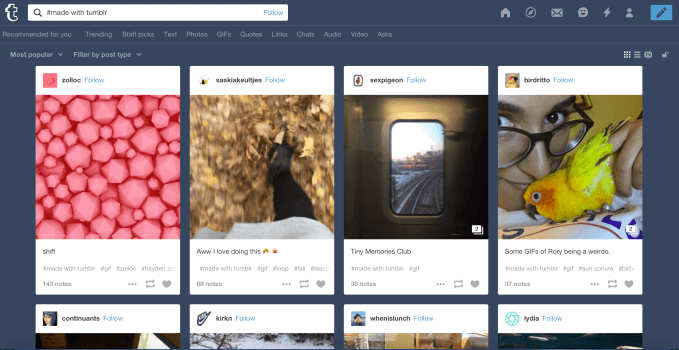 The fact that the GIF Maker is mobile-only also speaks to how Tumblr is positioning itself as a social network designed to be used on mobile first.

Today, 81 percent of Tumblr’s 550 million monthly unique visitors access the site via their mobile devices, and 65 percent of posts are created on the mobile app. Meanwhile, GIFs are hugely popular, with 23 million+ being posted every day on Tumblr. But many of these are reblogs; with GIF Maker, Tumblr hopes to activate its users and turn them into creators instead.

“Hopefully we’ll be able to help more people….I don’t want to say ‘regular’ people, but more ‘aspiring’ creators who don’t have the wherewithal to create a GIF today,” says Karp. “As we lower the barrier, and let more aspirational people do that, hopefully we’ll see a lot more content.”

GIF Making Is First Of Many Creative Expression Tools To Come

With Tumblr having set out to establish itself as the home to brand advertising on the web, GIF Maker can help the network’s advertisers create more viral, shareable content, as well. Already, the most popular Sponsored Posts are GIFs, we understand, and brands were among those Tumblr invited to test the tool ahead of today’s public launch.

Tumblr plans to cater to both this crowd and its users with other creative expression tools for mobile, including those for longform content creation. In fact, Karp says the team is now thinking about tools that focus on what it means to compose longform content on mobile,

“There’s so much whitespace there right now, either in building a whole new creative feature set or in building the best support for all the new emerging technologies and tools,” he says.