Earlier this year, Apple began offering same-day delivery of its products and accessories through its Apple Store mobile application, and then later expanded that option to its online web store thanks to its partnership with delivery service Postmates. However, at the time, deliveries from the Apple Store were limited to select San Francisco Bay Area ZIP codes. Now this same-day delivery option via courier is available to those located in New York City, as well.

This expansion was first spotted by MacRumors, who noted that same-day delivery is available in most of Manhattan, including 37 of some 43 ZIP codes it checked while testing out the new option. It’s also available in more limited areas in northern neighborhoods like Inwood and Washington Heights, the report said.

We’ve confirmed that Apple delivery is live in NYC both on Apple’s website and in its mobile app. 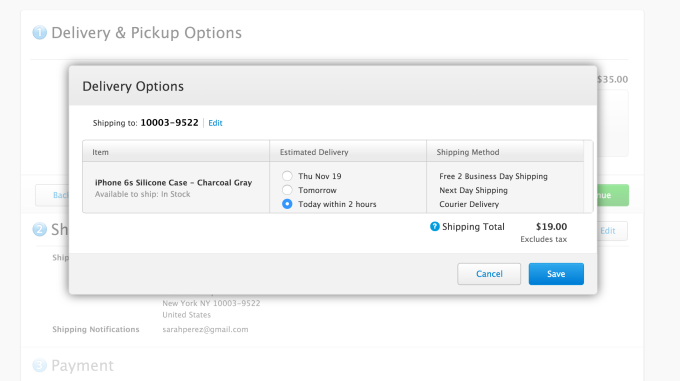 As before, consumers can order products on the web as well as in the Apple Store mobile application, then select the option for “courier delivery,” which costs an additional $19 – a flat rate fee. According to Apple’s documentation, courier delivery is a same-day delivery option that guarantees delivery within 2 hours, during business hours for select merchandise in select zip codes.

Rumor had it that New York was next on the list of supported cities for this delivery service from Apple stores. Some Apple customers were even told by retail staff this month that Postmates deliveries were “coming soon” to NYC:

When I picked up my Apple TV on Friday the Apple Store employee told me that Postmates deliveries are coming soon to NYC.

The original Apple partnership was a notable win for the San Francisco-headquartered startup. The expansion to New York seems to indicate the earlier trials were successful enough for the company to further roll out the same-day delivery option in its own online and mobile applications.

There’s still the potential for that partnership to expand in the future, as well. Postmates today operates in a number of major U.S. cities, the majority of which, of course, have Apple stores within short distances of the Postmates’ delivery base.